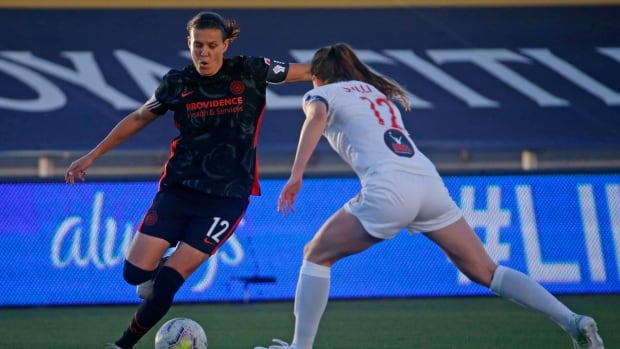 Sam Staab’s header in the 77th minute pulled the Washington Spirit into a 1-1 draw with the Portland Thorns on Sunday night in the National Women’s Soccer League’s Challenge Cup tournament.

Lindsey Horan’s diving header off a free kick from Meghan Klingenberg put the Thorns up 1-0 in the 69th minute. Spirit goalkeeper Aubrey Bledsoe got a hand on the ball but it bounced into the goal off the crossbar.

Staab scored for the Spirit on a back-heel volley from teammate Ashley Sanchez to tie the game up.

Horan nearly gave the Thorns the win in the 88th minute but Bledsoe dove to deflect the shot. Portland is still looking for its first Challenge Cup victory.

WATCH | Thorns FC and Spirit play to a draw:

A perfect setup from Ashley Sanchez led to an equalizing goal for the Washington Spirit in a 1-1 draw against the Portland Thorns in the National Women’s Soccer League’s Challenge Cup. 1:12

The Thorns were without defender Becky Sauerbrunn because of a left hip injury that will keep her out of the rest of the tournament.

Spirit midfielder Rose Lavelle and forward Ashley Hatch were on the bench to start the game but both came in for the second half. Hatch got a shot off in the 61st minute but Thorns goalkeeper Bella Bixby leapt to push it away with one hand.