As a state of emergency took effect Tuesday giving the Sri Lankan military war-time powers, police arrested 40 suspects, including the driver of a van allegedly used by suicide bombers involved in deadly Easter bombings and the owner of a house where some of them lived, officials said.

Sri Lanka’s president gave the military a wider berth to detain and arrest suspects — powers that were used during the 26-year civil war but withdrawn when it ended in 2009.

On Tuesday, which President Maithripala Sirisena declared a day of mourning, Sri Lankan authorities planned to brief foreign diplomats and receive assistance from the FBI and other foreign intelligence-gathering agencies after officials disclosed Monday that warnings had been received weeks ago of the possibility of an attack by the radical Muslim group blamed for the bloodshed.

The six near-simultaneous attacks on three churches and three luxury hotels and three related blasts later Sunday were the South Asian island nation’s deadliest violence in a decade. The government blocked most social media to curtail false information. Even after an overnight, nationwide curfew was lifted, the streets of central Colombo remained mostly deserted and shops closed as armed soldiers stood guard.

Prime Minister Ranil Wickremesinghe said he feared the massacre could unleash instability and he vowed to “vest all necessary powers with the defence forces” to act against those responsible.

In an indication of the tensions, three explosions caused panic but apparently no injuries Monday as police were defusing bombs inside a van parked near one of the stricken churches. Dozens of detonators were discovered near Colombo’s main bus depot, but officials declined to say whether they were linked to the attacks.

At Bandaranaike International Airport outside of Colombo early Tuesday morning, police walked explosive-sniffing dogs outside as inside cheery video advertisements of gamblers and snorkelers played. At a roadside checkpoint at the airport, security officials checked car trunks and questioned drivers.

The lack of social media access was contributing to the confusion and doing little to reassure residents and visitors that the danger had passed. International intelligence agencies had warned that the little-known group, National Thowfeek Jamaath, was planning attacks, but word apparently didn’t reach the prime minister’s office until after the massacre, exposing the continuing political turmoil in the highest levels of the Sri Lankan government.

Health Minister Rajitha Senaratne said the warnings started April 4, the defence ministry wrote to the police chief with information that included the group’s name and police wrote April 11 to the heads of security of the judiciary and diplomatic security division.

We placed our hands on our heads when we came to know that these deaths could have been avoided.-Cardinal Malcolm Ranjith

Sirisena, who was out of the country Sunday, had ousted Prime Minister Ranil Wickremesinghe in October and dissolved the Cabinet. The Supreme Court reversed his actions, but the prime minister has not been allowed into meetings of the Security Council since October, leaving him and his government in the dark about the intelligence.

It was not immediately clear what action, if any, was taken after the threats. Authorities said they knew where the group trained and had safe houses, but did not identify any of the suicide bombers, whose bodies were recovered, or the two dozen other suspects taken into custody.

All the bombers were Sri Lankans, but authorities said they strongly suspected foreign links, Senaratne said.

Also unclear was a motive. The history of Buddhist-majority Sri Lanka, a country of 21 million including large Hindu, Muslim and Christian minorities, is rife with ethnic and sectarian conflict.

In the 26-year civil war, the Tamil Tigers, a powerful rebel army known for using suicide bombers, was finally crushed by the government in 2009 but had little history of targeting Christians. Anti-Muslim bigotry fed by Buddhist nationalists has swept the country recently, but there is no history of Islamic militancy. Its small Christian community has seen only scattered incidents of harassment.

Two of the stricken churches are Catholic and one Protestant. The three hotels and one of the churches, St. Anthony’s Shrine, are frequented by foreigners. Tourism Minister John Amaratunga said 39 foreigners were killed, although the foreign ministry gave the figure as 31. The reason for the discrepancy wasn’t clear, but some victims were dual nationals.

India and Britain have confirmed eight dead each. The U.S. State Department confirmed that at least four Americans dead and several seriously wounded. Others were confirmed to be from Bangladesh, China, France, Japan, the Netherlands, Denmark, Portugal, Saudi Arabia, Spain, Turkey and Australia. 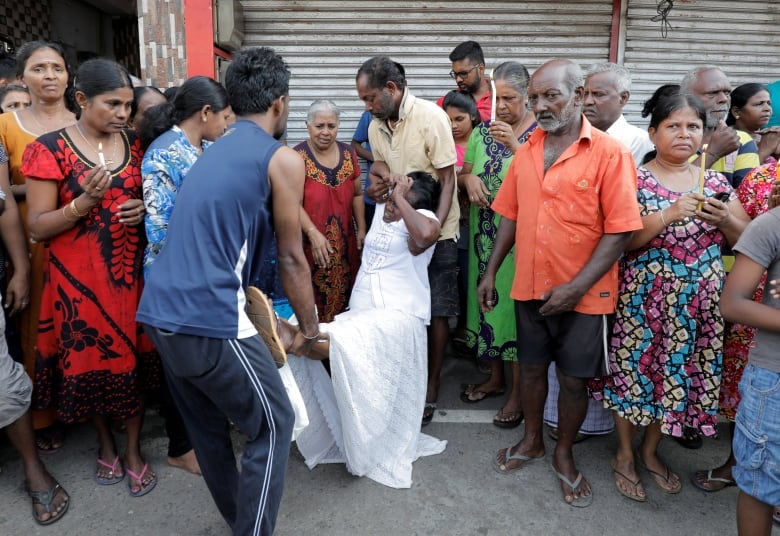 A woman is helped after she collapsed as silence is observed as a tribute to victims of the attacks in Sri Lanka on Tuesday. (Dinuka Liyanawatte/Reuters)

The scale of the violence recalled the worst days of the civil war, when the Tamil Tigers, from the ethnic Tamil minority, sought independence from the Sinhalese-dominated, majority Buddhist country. The Tamils are Hindu, Muslim and Christian.

The six near-simultaneous blasts were set off Sunday morning at St. Anthony’s and the Cinnamon Grand, Shangri-La and Kingsbury hotels in Colombo, as well as the two churches outside Colombo. They collapsed ceilings and blew out windows, killing worshippers and hotel guests, and leaving behind scenes of smoke, soot, blood, broken glass, screams and wailing alarms.

The military confirmed two other related blasts, one near an overpass and another at a guesthouse where two people were killed. A ninth blast, which killed three police officers, was set off by occupants of a safe house trying to evade arrest, authorities said.

Cardinal Malcolm Ranjith, the archbishop of Colombo, said at least 110 of the dead were killed at St. Sebastian’s, making it the deadliest of the attacks.

Nilantha Lakmal, a businessman who took his family to St. Sebastian’s for Mass, said they all escaped unharmed, but he remained haunted by images of bodies being taken from the sanctuary.

Cardinal Malcolm Ranjith, the archbishop of Colombo, said the attacks could have been thwarted.

“We placed our hands on our heads when we came to know that these deaths could have been avoided. Why this was not prevented?” he said.