Sri Lankan security officials have warned that Islamist militants behind Easter Sunday’s suicide bombings are planning imminent attacks and could be dressed in military uniforms, and they’ve enacted a temporary ban on women wearing face veils.

The militants were targeting five locations for attacks on Sunday — which passed without incident — or Monday, security sources said.

“There could be another wave of attacks,” the head of ministerial security division (MSD), a unit of the police, said in a letter to lawmakers and other officials, seen by Reuters on Monday.

“The relevant information further notes that persons dressed in military uniforms and using a van could be involved in the attacks.”

Scores of suspected Islamists have been arrested since the April 21 attacks on hotels and churches that killed more than 250 people, including 40 foreign nationals. 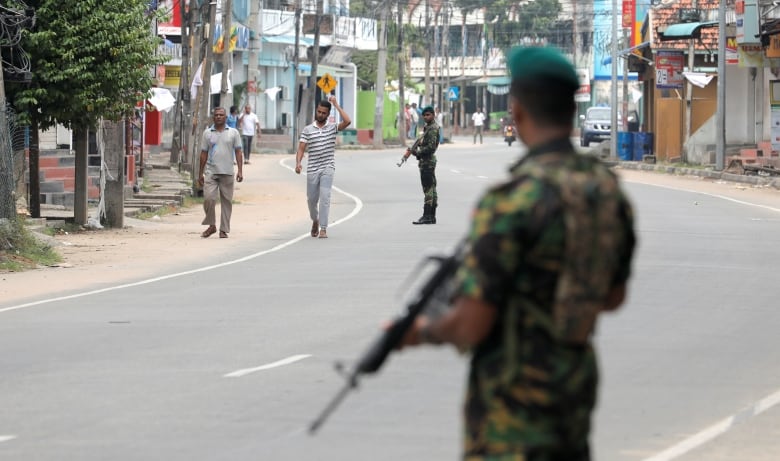 Soldiers stand guard during a curfew after an overnight gun battle, between troops and suspected Islamist militants, on the east coast of Sri Lanka, in Kalmunai on Saturday. (Dinuka Liyanawatte/Reuters)

Authorities banned women from wearing face veils under an emergency law put in place after the deadly attacks.

There were concerns within the Muslim community that the ban could fuel tensions in the multi-ethnic nation. But government officials said it would help security forces identify people as a hunt for any remaining attackers and their support network continues across the Indian Ocean island, which was gripped by civil war for decades until 2009.

The All Ceylon Jamiyyathul Ulama (ACJU), the top body of Islamic scholars in Sri Lanka, said they supported a short-term ban on security grounds, but opposed any attempt to legislate against burqas.

“We have given guidance to the Muslim women to not to cover their faces in this emergency situation,” ACJU assistant manager Farhan Faris said after the scholars asked the government to drop plans for a law against the burqa and niqab.

“That needless restriction means that Muslim women whose practice leads them to cover up now won’t be able to leave home,” the group’s executive director Kenneth Roth tweeted.

In Kattankudy, the Muslim-majority hometown of the suspected leader of the militant group behind the attacks, there few women in the streets and none had their faces covered.

Two women declined to be interviewed by Reuters. Residents said only a small percentage of women in the town wear the burqa.

Meanwhile, the most prominent Catholic in the country said security had not been sufficiently stepped up around churches.

“We are not satisfied with the security arrangements and urge authorities to ensure our safety,” MalcolmRanjith, archbishop of Colombo, told  reporters. 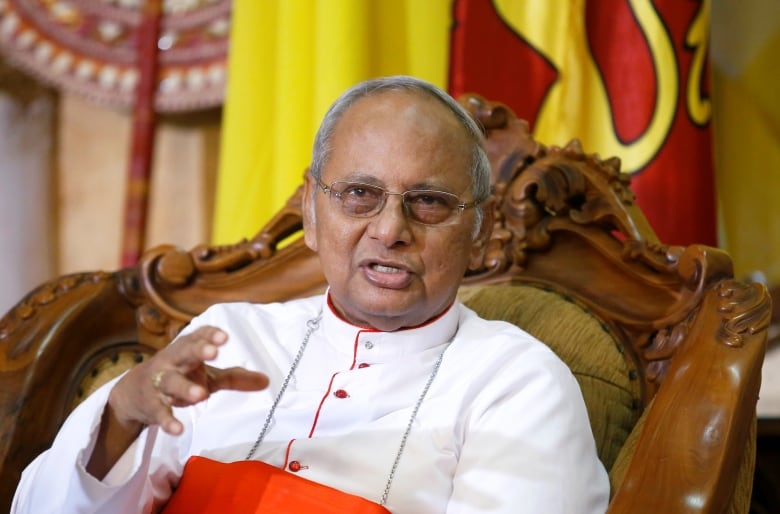 Cardinal Malcolm Ranjith, the archbishop of Colombo, expressed dissatisfaction with security arrangements and the politicking of senior officials in the wake of the attacks. (Thomas Peter/Reuters)

“They [the group] were small enough that they were not using normal communications, instead meeting each other,” Wickremesinghe told Reuters.

He added the co-ordinated bombings, the type of explosives used and the tightly guarded plot suggested the bombers had guidance.

“ISIS has claimed, we also felt there has to be some international links,” he said about the Islamic State in Iraq and Syria. 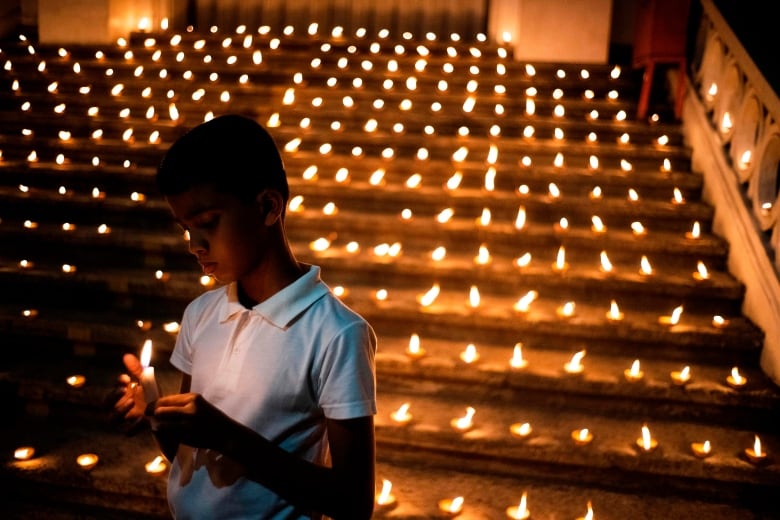 A mourner lights candles during a vigil in memory of the victims in Colombo on Sunday, a week after a series of bomb blasts targeting churches and luxury hotels. (Jewel Samad/AFP/Getty Images)

Authorities believe Zahran Hashim, the founder of NTJ, was the mastermind and one of the nine suicide bombers.

One military source told Reuters that five sets of white attire commonly worn by Buddhists when visiting temples were recovered from a safe house in the east, the site of a gun battle on Friday that killed Zahran’s father and his two brothers.

His wife and daughter escaped an explosion with minor injuries, hospital staff and police said.

Sirisena fired Wickremesinghe last year, after months of tension, only to be forced to reinstate him under pressure from the Supreme Court.

Since then, their relationship has deteriorated further to the point where their factions actively try to undermine each other, including not sharing security information, defense sources say.

Sirisena said on Monday he had appointed Chandana Wickramaratne, the second in command at the police, as acting police chief.

Over the weekend, two sources at the president’s office told Reuters that Pujith Jayasundara, the police chief during the attacks, was refusing the president’s request to step down.

It was not immediately possible to contact Jayasundara on Monday.

The president has also appointed Gen. Shantha Kottegoda as the new defence secretary, replacing Hemasiri Fernando who resigned after the bombings, saying some institutions under him had failed.

Kottegoda, 69, army commander between 2004 and 2005, was instrumental in weakening Tamil Tiger rebels by breaking away an allied group.

The archbishop criticized the bickering at the top levels of government.

“Instead, they must have broad discussion on what steps needed to be taken to solve this and take this country out of this crisis.”

Sri Lanka’s Tourism Bureau chairman, Kishu Gomes, said tourist arrivals in Colombo were expected to fall 50 per cent over the next two months because of the bombings. Tourist arrivals in areas elsewhere in Sri Lanka would likely go down by about 30 per cent, he told reporters at a travel conference in Dubai.

In India, police said they had raided the homes of three people in the southern state of Kerala, close to Sri Lanka, in connection with their links to Islamic State. They did not say if there was any connection to the attacks in Sri Lanka.