The Islamic State has claimed responsibility for Sunday’s deadly string of bombings in Sri Lanka, providing a photo and the noms de guerre of the eight men it says were responsible for the attacks.

While only one man’s face is visible — Zahran Hashim, a radical imam known for his fiery pro-ISIS sermons on Facebook and YouTube — the Sri Lankan government seems inclined to believe that the terrorist group was behind the coordinated blasts at churches and hotels that killed at least 321 and injured 500 others.

Authorities had initially identified a homegrown extremist group, National Thowheeth Jama’ath, as the prime suspects. But they now suggest that the plot had “international support” from a terrorist organization in India called Jamaat-ul-Mujahideen, and perhaps the Islamic State.

“We can’t tell you immediately, definitively to whom they had links,” Prime Minister Ranil Wickremesinghe told a news conference today. But initial suspicions “that there were links with ISIS,” have now been backed up by “some of the evidence.”

Ruwan Wijewardene, the country’s defence minister, told parliament that the preliminary investigation has revealed that what happened in Sri Lanka, “was in retaliation for the attack against Muslims in Christchurch.”

More than 40 people are being held for questioning in connection with the Easter weekend blasts, but all of them are Sri Lankan citizens.

The Islamic State propaganda network frequently claims responsibility for violent acts and plots across the globe, often without furnishing any proof.

But if nothing else, its boasts about marking the “infidel holiday” of Easter with the six Sri Lankan strikes demonstrates that the group retains ambitions to be the world’s foremost terrorist brand, despite losing the last remnants of its caliphate in Iraq and Syria. 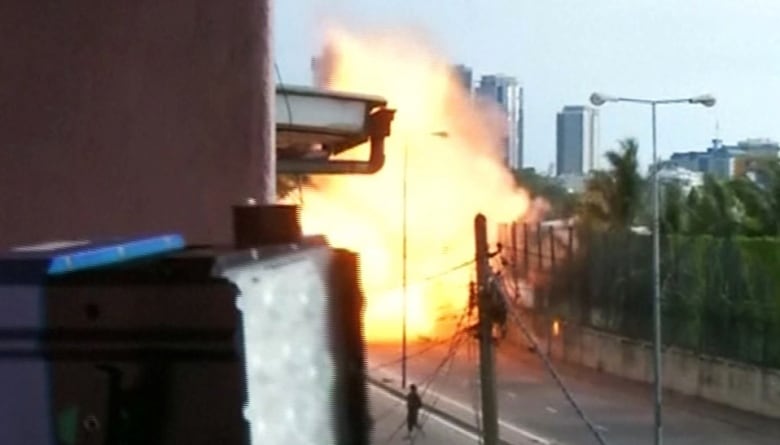 An explosion goes off in a van near St. Anthony’s Church in Colombo, Sri Lanka, on April 22 as bomb squad officials attempted to defuse it. (Reuters)

ISIS has also claimed responsibility for a Sunday attack in Saudi Arabia, in which four men armed with automatic weapons and explosive belts tried to storm a police station in the city of Zulfi, 250 kilometres northeast of Riyadh. All four were killed, and three policemen were injured in a gun battle that lasted for hours.

Afterwards, Saudi authorities staged a raid on what they said was a nearby ISIS “bomb factory,” arresting 13 men and seizing 75,000 kilograms of fertilizer.

Today, the Saudi government announced via Twitter that it has executed 37 terrorism suspects, although it’s not clear if that number included any of those arrested this weekend.

The Islamic State also says it was behind a Saturday attack on the headquarters of Afghanistan’s communications ministry in Kabul. The suicide bombing and commando raid killed four civilians and three police, and wounded at least eight other people.

And in the month since its “final” defeat in the Syrian border town of Baghouz, real or wannabe members of ISIS have staged their first-ever attack in the Democratic Republic of Congo, killing eight government soldiers inside the zone where an Ebola outbreak is raging. 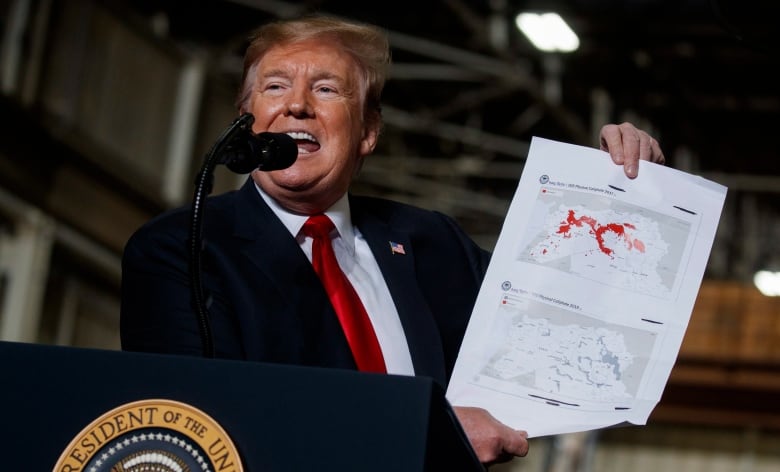 The group has also claimed to be behind the assassination of a Tuareg leader in Mali, and a joint assault with Boko Haram soldiers on the city of Diffa in southeastern Niger.

Two alleged plots in the United States have also been linked to the group.

In late March, police in Maryland arrested a 28-year-old man after he stole a U-Haul truck, with the supposed intent of driving it into crowds along the banks of the Potomac River near Washington, D.C.

And yesterday, a mother of seven from a small Wisconsin townpleaded  guilty to using hacked social media accounts in an effort to help others plan attacks in the name of ISIS.

A BBC data analysis, published last month, showed that ISIS claimed to have been behind 3,670 attacks worldwide last year — an average of 11 each day — and a further 502 attacks over the first two months of 2019.

This March 24 photo shows smoke rising behind destroyed vehicles and damaged buildings in the village of Baghouz in Syria near the Iraqi border, a day after the Islamic State’s ‘caliphate’ was declared defeated by the U.S.-backed Kurdish-led Syrian Democratic Forces (SDF). (Giuseppe Cacace/AFP/Getty Images)

Most were in Iraq, Syria, and Afghanistan, but the group also claims to have been active in Somalia, the Philippines, Egypt and Nigeria.

The group has also claimed responsibility for a number of smaller-scale incidents in France, Belgium and Australia. (An ISIS claim of responsibility for a shooting spree along Toronto’s Danforth Avenue last summer that left two dead and wounded 13 others has been rejected by police.)

The New York Times calculates that the Islamic State or its acolytes have carried out attacks in at least 25 different countries since 2017.

And in a wired world, support and encouragement doesn’t need to happen face-to-face.

In one foiled 2017 plot against a high-tech hub in India, ISIS members allegedly recruited all the would-be attackers and helped them plan every detail, even obtaining their weapons, without ever meeting them.

It’s that type of “remote control” assistance that authorities in Sri Lanka are now investigating, focusing on the bomb-making, reconnaissance and planning efforts that made Sunday’s attack among the deadliest in years.

Working from home is great, right? Well, you might want to think twice before ditching the daily commute, writes business correspondent Dianne Buckner.

If you’re sick and tired of commuting to work every day, you may think those who can do their jobs from home have it made.

What could be better than rolling out of bed and travelling only as far as your couch or kitchen to start the day’s labours? You can wear your PJs or favourite tracksuit as you type away on your computer and make calls, while enjoying all the comforts of home and maybe even spending more time with your children or pets.

But here’s a reality check: a growing body of data says isolation is a major cause of mental health trouble. And those who work at home on a full-time basis are most likely to experience loneliness and depression. 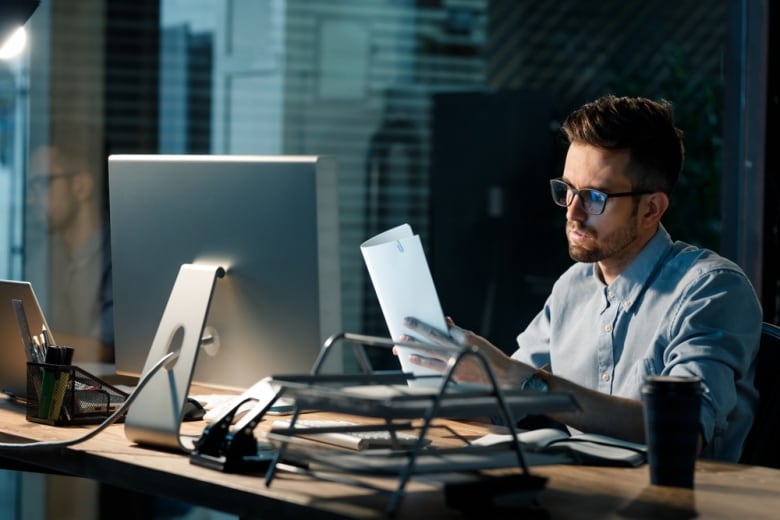 Tonight on The National, we’re looking at the disturbing link between mental health disability claims and working at home.

A lot of companies have been encouraging employees to telecommute for some time now, in part because it cuts down on the need for expensive office space. One recent study says that fully half of the Canadian workforce is now spending more than two days a week outside of the office, and one-fifth do it full-time.

During the course of researching this story, I heard from many employees who love it, too. They enjoy the freedom that comes with working remotely, and the sense of being valued when their employer trusts them to get their work done wherever they are.

But mental health issues are triggering costs for both businesses and their employees. Tonight’s report includes two Canadian telecommuters who reveal why the “luxury” of working from home was anything but.

From how we think about our jobs, to where and when we do them, the stress of modern work is affecting Canadians in a lot of ways and across industries. This week, The National takes a look at the forces behind this stress and the ways we can avoid burning out. We examine new approaches to productivity and creativity, how we structure shift work, the mental health effects of telecommuting and what Canada can learn from other countries. More from this series:

The National will be delayed on the CBC television network tonight due to NHL playoff Game 7 between the Toronto Maple Leafs and Boston Bruins. The show will air at its usual time, 9 p.m. ET, on News Network and online.

The high-point of Season 30.

“For Canada’s garbage, I want a boat prepared. They better pull that thing out or I will set sail to Canada and dump their garbage there … I will advise Canada that your garbage is on the way, prepare a grand reception, eat it if you want to.”

– Philippine President Rodrigo Duterte  raises the stakes in a long-running dispute about 103 containers of waste that arrived in Manila in 2013 and 2014 under the guise of a recycling program. 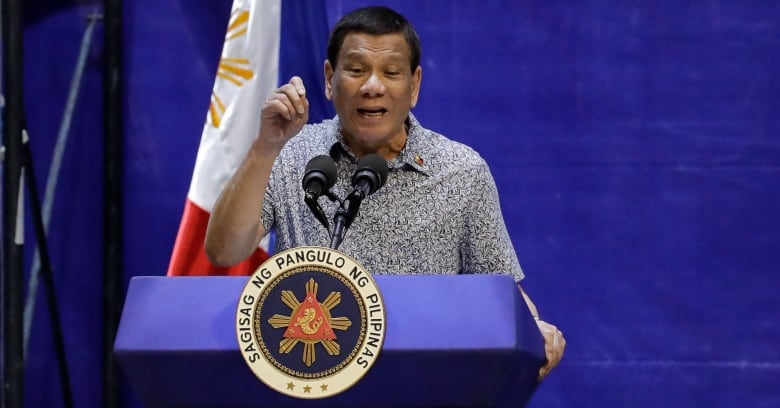 The Post Office is gone. So too are the hardware and grocery stores, and even the town school. But one building still has the lights on in tiny Altamont, Man. — the curling rink. And even as the population has shrunk to just 70 people, throwing rocks remains a way of life.

There aren’t many people left in Altamont, Man., but the town curling club just may be the key to its survival. 6:33