Sri Lanka’s president has given the military sweeping wartime powers a day after a string of bombings at churches and luxury hotels across the country killed 290 people and wounded about 500.

Maithripala Sirisena declared a nationwide emergency at midnight local time on Monday (2:30 p.m. ET), his office said. This measure grants police and the military extensive powers to detain and interrogate suspects without court orders, and was in force at various times during the civil war with Tamil separatists.

“The government has decided to gazette the clauses related to prevention of terrorism to emergency regulation and gazette it by midnight,” the president’s media unit said in a statement.

It said the measure would be confined to dealing with terrorism and would not impinge on freedom of expression. In addition, a government curfew began at 8 p.m. local time.

There was no claim of responsibility for the Easter Sunday attacks, which targeted churches and hotels in and around the capital Colombo, as well as a church on the nation’s northeast coast. But cabinet spokesperson Rajitha Senaratne said the attacks were carried out by a local militant group named National Thowfeek Jamaath — with the help of an international network.

“We do not believe these attacks were carried out by a group of people who were confined to this country,” Senaratne said. “There was an international network without which these attacks could not have succeeded.”

Four of the bombs went off at roughly the same time, at 8:45 a.m. local time on Sunday, with the other two coming within 20 minutes. 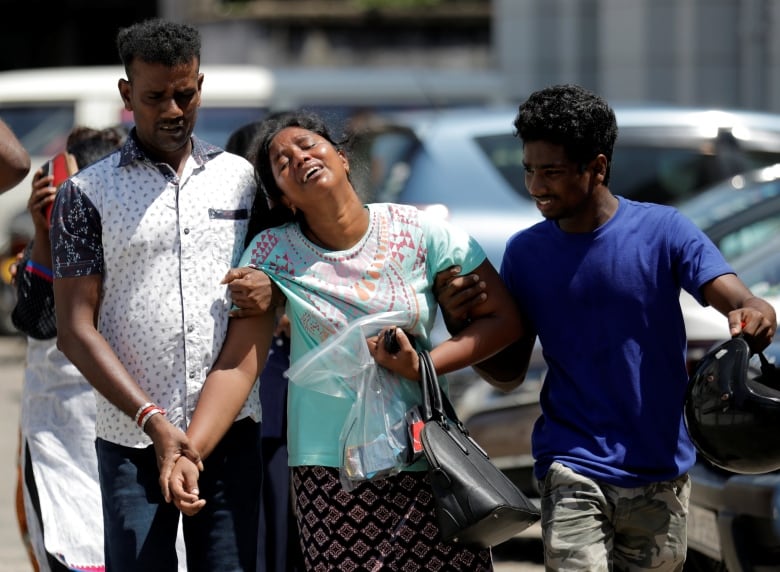 Relatives of victims react at a police mortuary after bomb blasts ripped through churches and luxury hotels in Colombo, Sri Lanka. (Dinuka Liyanawatte/Reuters)

Senaratne also said Sri Lankan officials failed to heed warnings from intelligence agencies about the threat of an attack; it was not immediately clear what action, if any, was taken in response, while authorities said little was known about the group, except that its name had appeared in intelligence reports.

Sri Lankans accounted for the bulk of the dead and wounded. There were conflicting numbers from government officials on the number of foreigners killed, with Tourism Minister John Amaratunga saying 39 were dead and the country’s foreign ministry putting the number at 31. The foreign victims were identified as being British, U.S., Turkish, Indian, Chinese, Danish, Dutch and Portuguese. Spain also said two of its citizens were killed.

Police found 87 bomb detonators at the main bus station in Colombo on Monday, a spokesperson said. Security forces are carrying out searches across the island to find those behind the bombs.

An explosion also went off on Monday in a van near one of the attacked churches when bomb squad officials were trying to defuse it, a Reuters witness said.

“The van exploded when the bomb-defusing unit of the STF [Special Task Force] and air force tried to diffuse the bomb,” the witness said.

Watch footage of the van exploding:

A van exploded in Sri Lanka near one of the attacked churches when bomb squad officials tried to defuse the bomb inside. 0:26

The Sri Lankan military, which was clearing the route from Colombo airport late on Sunday in preparation for Sirisena’s return, found a crude bomb near the departure gate, an air force spokesperson said.

They destroyed the device in a controlled explosion.

There were fears the attacks could spark a renewal of communal violence, with police also reporting late Sunday there had been a petrol bomb attack on a mosque in the northwest and arson attacks on two shops owned by Muslims in the west.

Sri Lanka was at war for decades with ethnic minority Tamil separatists but violence had largely ended since the government victory in the civil war, 10 years ago.

Sri Lanka’s 22 million people include Christian, Muslim and Hindu populations of between about eight and 12 per cent.

Security forces raided a house in Colombo on Sunday afternoon, several hours after the attack. Police reported an explosion at the house and said three officers were killed. 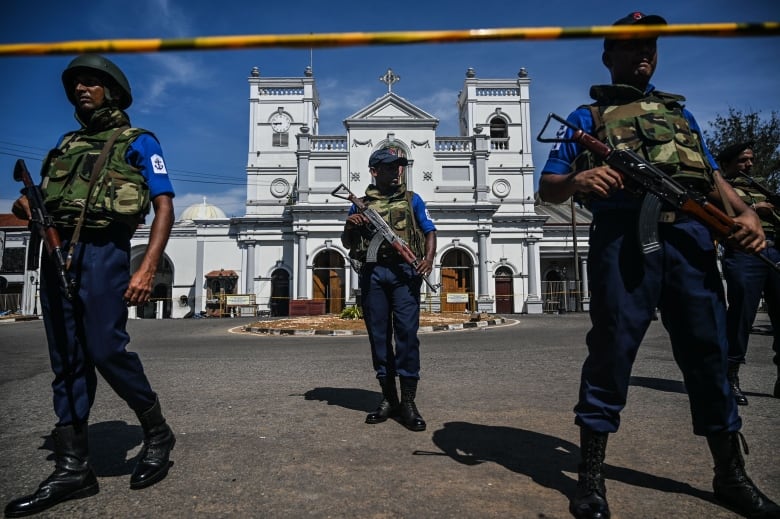 Security personnel stand guard outside St. Anthony’s Shrine in Colombo on Monday, a day after the church was hit in series of bomb blasts targeting churches and luxury hotels in Sri Lanka. (Mohd Rasfan/AFP/Getty Images)

Police said Monday 24 people had been arrested, all of whom were Sri Lankan.

The U.S. State Department issued a revised travel warning saying, “Terrorists may attack with little or no warning.” The threat level has been set at two on a scale on which four means do not travel.

“Others attacks could occur throughout the country,” the updated advice said.

Global Affairs Canada said in a statement Sunday that it had no reports of Canadian citizens being affected by the attacks.

Sri Lanka reels from a series of co-ordinated bomb attacks on several churches and luxury hotels on Easter Sunday. 0:40

Soldiers with automatic weapons stood guard outside major hotels and the World Trade Centre in the business district, where the four hotels were targeted on Sunday, according to a Reuters witness.

Scores of people who were stranded overnight at the main airport began making their way home as restrictions were lifted.

The government also blocked access to social media and messaging sites, including Facebook and WhatsApp, making information hard to gather.

Wickremsinghe acknowledged on Sunday that the government had some prior information about possible attacks on churches involving a little-known Islamist group but said ministers had not been told.

‘It was panic mode’

“There was blood everywhere,” said Bhanuka Harischandra, a 24-year-old from Colombo and founder of a tech marketing company. He was heading to the Shangri-La hotel for a meeting when it was bombed.

“People didn’t know what was going on. It was panic mode.” A view of the damage at St. Sebastian Catholic Church in Negombo on Monday. (Athit Perawongmetha/Reuters)

There were similar scenes of carnage at churches in or near Colombo, and a third church in the northeast town of Batticaloa, where worshippers had gathered for Easter Sunday services.

Dozens were killed in one of the blasts at the Gothic-style St. Sebastian church in Katuwapitiya, north of Colombo. Police said they suspected that blast was a suicide attack.

Harischandra said there was “a lot of tension” after the bombings, but: “We’ve been through these kinds of situations before.”

He said Sri Lankans are “an amazing bunch” and noted his social media feed was flooded with photos of people standing in long lines to give blood.