Sri Lanka’s president has asked for the resignations of the defence secretary and national police chief, a dramatic internal shakeup after security forces shrugged off intelligence reports warning of possible attacks before Easter bombings that killed over 350 people, the president’s office said Wednesday.

It wasn’t immediately clear who would be replacing them, but President Maithripala Sirisena said during a televised speech Tuesday that he planned to change the head of the defence forces within 24 hours.

The Islamic State in Iraq and Syria has claimed responsibility for the attacks on Christians worshipping in three churches and people at three luxury hotels. Authorities remain unsure of its involvement, though many suspect experienced foreign militants were advising, funding or guiding the attackers.

“Their thinking is that Islam can be the only religion in this country,” RuwanWijewardene told reporters. “They are quite well-educated people,” he said, adding that at least one had a law degree, and some may have studied in the U.K. and Australia. 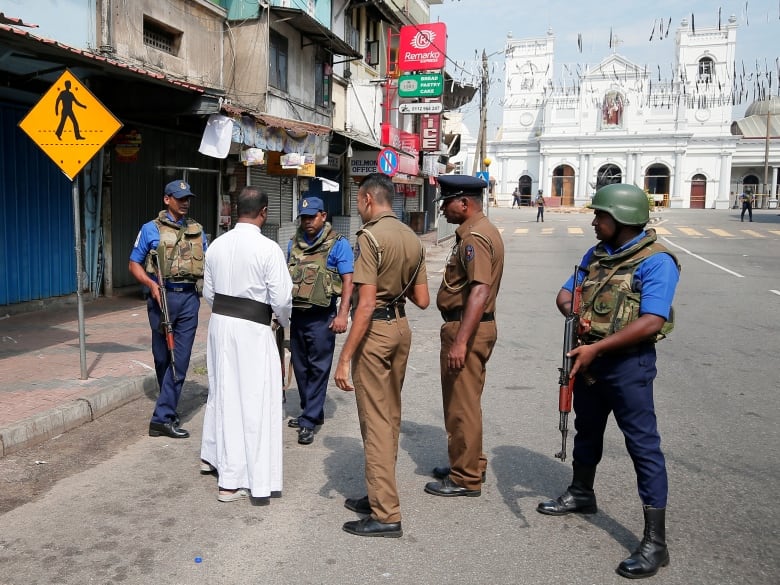 A priest speaks on Wednesday with security personnel in Colombo near St. Anthony’s Shrine, the scene of one of the attacks across the island on Easter Sunday. (Dinuka Liyanawatte/Reuters)

Leaders have vowed to overhaul the country’s security apparatus after acknowledging some intelligence units were aware of possible attacks before the Easter bombings.

U.S. Ambassador AlainaTeplitz told reporters that “clearly there was some failure in the system,” but said the U.S. had no prior knowledge of a threat before the attacks, the worst violence in the South Asian island nation since its civil war ended a decade ago.

Government statements about the attacks have been confused and sometimes contradictory, with police spokesperson RuwanGunasekara telling reporters Wednesday there were nine suicide bombers — two more than officials said one day earlier.

Watch this security footage showing a suspected bomber walking into a church:

Security footage shows a suspected bomber walking into a Sri Lankan church with a backpack just before the Easter attacks. 0:55

One of the additional suicide bombers was the wife of another bomber, Gunasekara said. The woman, two children and three policemen died in an explosion as authorities closed in on her late Sunday, hours after attacks were launched against three churches and three hotels. The ninth suicide bomber has not been identified, though two more suspects were killed in a later explosion on the outskirts of Colombo.

A team of FBI agents and U.S. military officials were helping in the investigation, Teplitz said.

Putting the death toll at 359, officials said all of the main suicide bombers appear to have been Sri Lankan.

“We are conducting investigations at the moment to see if there is any direct link to any international organizations,” Wijewardene said.

The Islamic State group’s Aamaq news agency released an image it said showed the attackers’ leader standing amid seven others with covered faces. It provided no other evidence for its claim.

The group, which has lost all the territory it once held in Iraq and Syria, has made a series of unsupported claims of responsibility for various attacks around the world. 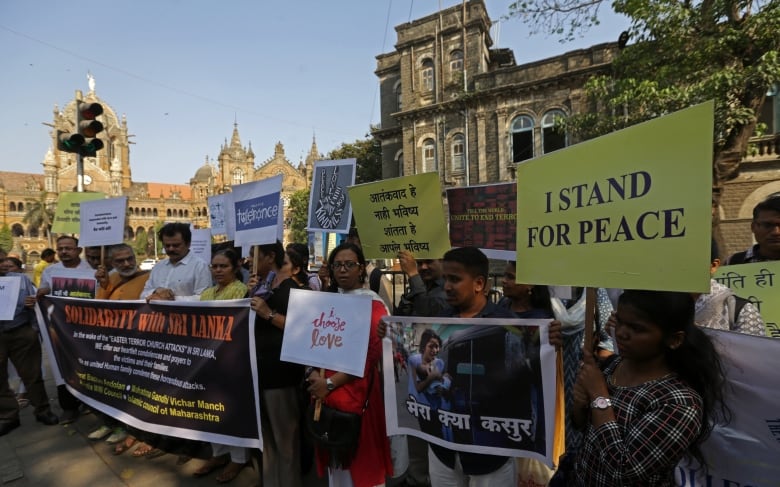 People in Mumbai on Wednesday pay tribute to people who died in the Sri Lanka bombings. The Indian Embassy in Colombo has said 10 Indian nationals died in the blasts. (Divyakant Solanki/EPA-EFE)

Sri Lankan authorities had earlier blamed a local extremist group, National Towheed Jamaar, whose leader, alternately named Mohammed Zahran or Zahran Hashmi, became known to Muslim leaders three years ago for his incendiary online speeches. On Wednesday, Wijewardene said the attackers had broken away from National Towheed Jamaar and another group, which he identified only as “JMI.”

Teplitz declined to discuss whether U.S. officials knew about National TowheedJamaar or its leader before the attack. “If we had heard something, we would have tried to do something about this,” Teplitz said.

The country has been on heightened alert since the attacks, with police setting off a series of controlled explosions of suspicious objects. No more bombs were found Wednesday.

Wijewardene also edged away from Tuesday comments that the bombings were retaliation for the March 15 mosque shootings in Christchurch, New Zealand, that killed 50 people. He told reporters Wednesday that the mosque attack may have been a motivation for the bombings, but that there was no direct evidence of that. 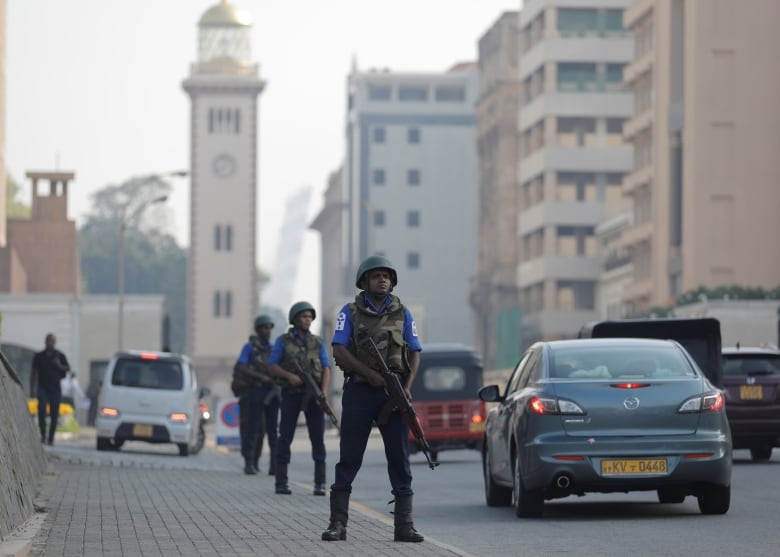 Military personnel stand guard on a main road near the president’s house in Colombo, three days after a string of suicide bomb attacks. (Dinuka Liyanawatte/Reuters)

In addition to Sri Lanka, deceased victims have been confirmed from India, the United Kingdom, the United States, Australia, China, Denmark, Japan, the Netherlands, Portugal, Spain and Switzerland.

The history of Buddhist-majority Sri Lanka, a country of 21 million including large Hindu, Muslim and Christian minorities, is rife with ethnic and sectarian conflict.

In the nation’s 26-year civil war, the Tamil Tigers, a powerful rebel army known for using suicide bombers, had little history of targeting Christians and was crushed by the government in 2009. Anti-Muslim bigotry fed by Buddhist nationalists has swept the country recently. 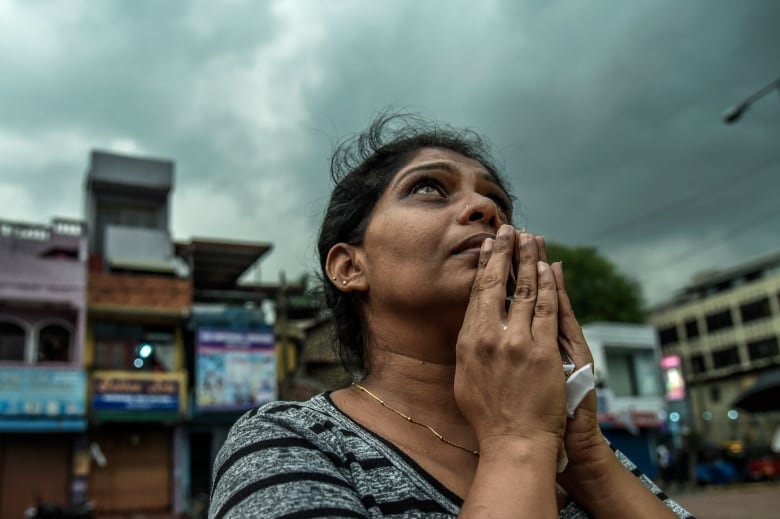 The death toll from Sunday’s attacks rose to 359 on Wednesday. A day earlier, people gathered to pray near St. Anthony Church in Colombo. (Atul Loke/Getty Images)

In March 2018, Buddhist mobs ransacked businesses and set houses on fire in Muslim neighbourhoods around Kandy, a city in central Sri Lanka that is popular with tourists.

After the mob attacks, Sri Lanka’s government also blocked some social media sites, hoping to slow the spread of false information or threats that could incite more violence.

Sri Lanka has no history of Islamic militancy. Its small Christian community has seen only scattered incidents of harassment.