A piece of equipment unique to Alberta garnered a lot of interest at a medical conference in Calgary over the weekend.

Neurologists from across the country were in town for the annual Canadian Stroke Congress, with many wanting to get a look at a specialized ambulance operating out of the University of Alberta Hospital in Edmonton.

Essentially a mobile CT scanner, the $ 1-million unit has the technology and staffing to treat patients suffering a stroke, especially those in rural areas who could lose their lives or suffer paralysis if they’re too far from a hospital and can’t be treated in time.

“To do it out on the road in the middle of winter in northern Alberta, I mean that’s where technology’s supposed to be, right?” said Albert Jin, an Ontario neurologist.

“It’s supposed to be putting this sort of care and this sort of technology in the hard-to-reach places where people live. And it’s just incredible. I really want to see this in my region.”

The specialized ambulance is able to meet a regular ambulance carrying a patient and a scan is done on the side of the road, which can be assessed by specialists at the U of A, saving precious time.

It began operating in January as part of a three-year pilot program funded by the University Hospital Foundation and can travel up to 250 kilometers outside of Edmonton.

Another topic being discussed over the weekend was the requirement for physicians to report patients who have suffered a stroke and may no longer be well enough to drive. 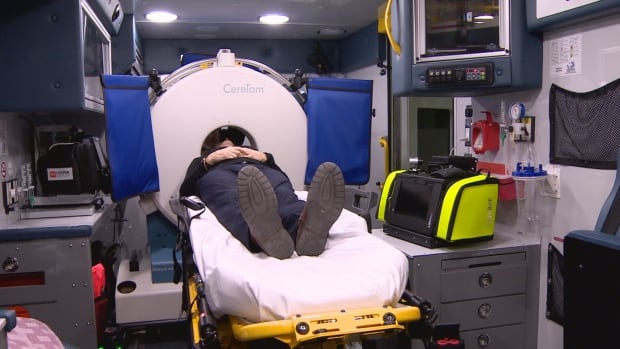 Patients can be given a CT scan on the side of the road, which is assessed by specialists in Edmonton. (CBC)

Alberta is one of three provinces in the country where physicians are not required to do that, Dr. Hillel Finestone, the director of stroke rehabilitation at Elisabeth Bruyere Hospital in Ottawa, told Daybreak Alberta.

Finestone said some doctors have expressed being uncomfortable assessing whether someone is fit to drive after suffering a stroke while others had concerns around privacy when it comes to releasing information about patients.

“We’re going to try to have some discussion because it’s such a sensitive issue,” he said Sunday morning.

“We know that driving is life for some people. In rural Alberta, driving is freedom, the ability to have social interaction with others. If you don’t have that, it’s terrible.”

The current test for fitness involves looking at the patient’s history, as well as having them perform a few simple tests and tasks, like drawing a clock with the 12 numbers.

Those who’ve suffered a stroke or other brain injury, said Finestone, will often draw it with the numbers only on one side.

​With files from Daybreak Alberta