Awad Mohamed Ahmed Ibn Auf, appearing in military fatigues, said a military council will take charge of running the country for a two-year transitional period. He also announced that the constitution has been suspended, borders and airspace had been closed and a three-month state of emergency has been imposed.

Ibn Auf said after the two-year transitional period, “free and fair elections” will take place. He also said the government and the presidency have been dissolved, and imposed a night curfew.

Al-Bashir, the president for 30 years who is a pariah in many countries, is also wanted by the international war crimes tribunal for atrocities in Darfur.

Eyewitnesses in Khartoum said the military had been deployed at key sites in the city to secure several installations since the morning hours.

Armoured vehicles and tanks are parked in the streets and near bridges over the Nile River, they said, as well as in the vicinity of the military headquarters, where thousands were anxiously awaiting the army statement. The witnesses spoke on condition of anonymity, fearing reprisals.

The main organizer of protests against al-Bashir rejected the defence minister’s statement, a senior source from the group said Thursday.

The Sudanese Professionals Association also called on protesters to maintain a sit-in outside the Defence Ministry that started on Saturday, the source said. 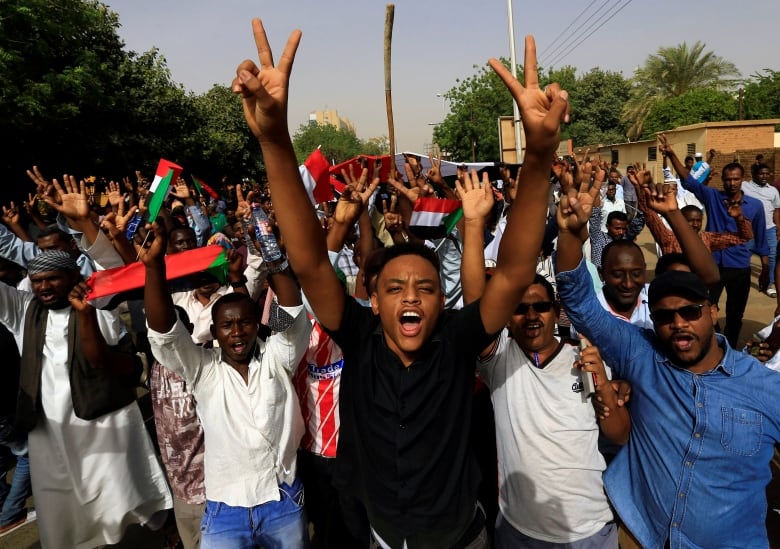 Sudanese activists behind months-long protests against al-Bashir said hundreds who were detained over the demonstrations have already been freed.

Thousands of protesters, including women carrying their children, were making their way toward the military headquarters, clapping and ululating, many flashing “V” for victory. There were also unconfirmed reports that the airport in the Sudanese capital had been closed.

Ahead of Thursday’s statement on state TV, Sudanese radio played military marches and patriotic music. State TV ceased regular broadcasts, with only the brief announcement saying that there will be an “important statement from the armed forces after a while, wait for it.”

The development followed deadly clashes between Sudanese security forces and protesters holding a large anti-government sit-in outside the military’s headquarters in Khartoum, which also include a presidential residence. There were several attempts to break up the sit-in, leaving 22 dead since Saturday.

The months of protests have plunged Sudan into its worst crisis in years. The demonstrations initially erupted last December with rallies against a spiralling economy, but quickly escalated into calls for an end to embattled al-Bashir’s rule. 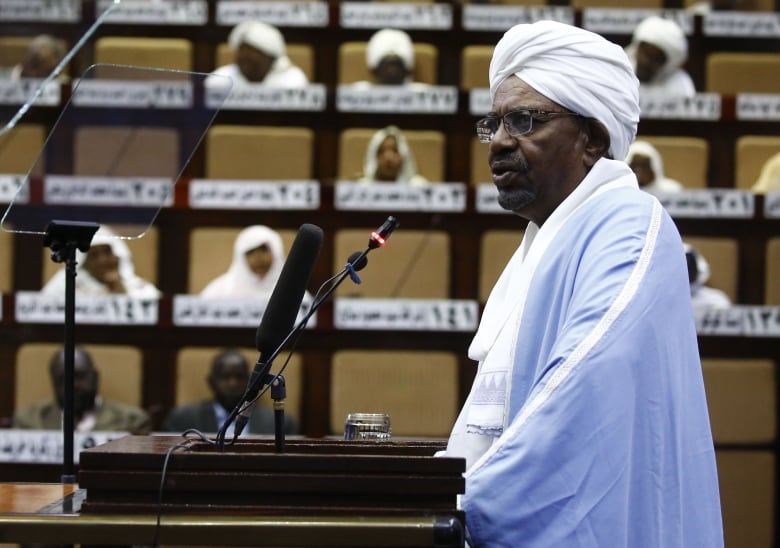 The Sudanese president addressed parliament in the capital Khartoum on April 1. It was his first such speech since he imposed a state of emergency across the country in February. (Ashraf Shazly/AFP/Getty Images)

The protests gained momentum last week after Algeria’s President Abdelaziz Bouteflika, in power for 20 years, resigned in response to weeks of similar protests.

On Saturday, marches in Khartoum marked the 34th anniversary of the overthrow of former President Jaafar al-Nimeiri in a bloodless coup. It was one of the largest turnouts in the current wave of unrest.

The military removed al-Nimeiri after a popular uprising in 1985. It quickly handed over power to an elected government. The dysfunctional administration lasted only a few years until al-Bashir — a career army officer — allied with Islamist hardliners and toppled it in a coup in 1989.

Since the current protests began Dec. 19, the military has stated its support for the country’s “leadership” and pledged to protect the people’s “achievements” — without mentioning al-Bashir by name.