U.S. President Donald Trump on Thursday rejected the official conclusion that nearly 3,000 people died in Puerto Rico from last year's Hurricane Maria, arguing without evidence that the number was wrong and calling it a plot by Democrats to make him "look as bad as possible."

As Hurricane Florence approached the Carolinas, the president picked a fresh fight over the administration's response to the Category 4 storm that smashed into the U.S. territory last September. Trump visited the island in early October to assess the situation amid widespread criticism over the recovery efforts.

3000 people did not die in the two hurricanes that hit Puerto Rico. When I left the Island, AFTER the storm had hit, they had anywhere from 6 to 18 deaths. As time went by it did not go up by much. Then, a long time later, they started to report really large numbers, like 3000…

…..This was done by the Democrats in order to make me look as bad as possible when I was successfully raising Billions of Dollars to help rebuild Puerto Rico. If a person died for any reason, like old age, just add them onto the list. Bad politics. I love Puerto Rico!

Last month, Puerto Rico's governor raised the U.S. territory's official death toll from Hurricane Maria from 64 to 2,975, after an independent study found the number of people who succumbed in the aftermath had been severely undercounted.

Previous reports from the Puerto Rican government said the number was closer to 1,400.

Trump's comments drew swift criticism from elected officials and residents of the island, where blackouts remain common, 60,000 homes still have makeshift roofs and 13 per cent of municipalities lack stable phone or internet service.

San Juan Mayor Carmen Cruz, a Democrat who has sparred with Trump, responded to his comments via Twitter.

This is what denial following neglect looks like: Mr Pres in the real world people died on your watch. YOUR LACK OF RESPECT IS APPALLING! <a href="https://t.co/OJEDqT74Sr">pic.twitter.com/OJEDqT74Sr</a>

Damn it: this is NOT about politics this was always about SAVING LIVES. <a href="https://t.co/SjwywKN3Jh">pic.twitter.com/SjwywKN3Jh</a>

Gov. Ricardo Rossello said in a Facebook post in Spanish, "the victims of Puerto Rico, and the people of Puerto Rico in general, do not deserve to be questioned about their pain."

Rossello said he left the analysis of the deaths in the hands of experts and accepted their estimate as the official death toll. "I trust that this process was carried out properly," he said.

Florida Gov. Rick Scott also disagreed with Trump, adding: "The loss of any life is tragic; the extent of lives lost as a result of Maria is heart wrenching."

House Speaker Paul Ryan said he had "no reason to dispute" the study that found nearly 3,000 people on the island had died as a result of the storm.

Trump began to focus on Hurricane Florence earlier this week, calling for an Oval Office briefing with the director of FEMA. When a reporter asked Trump about Maria in the Oval Office, he swiftly unleashed a fact-challenged defence of his response to the hurricane. That led the cable news coverage that evening.

The estimate of nearly 3,000 dead in the six months after Maria devastated the island in September 2017 and knocked out the entire electrical grid was made by researchers with the Milken Institute School of Public Health at George Washington University. 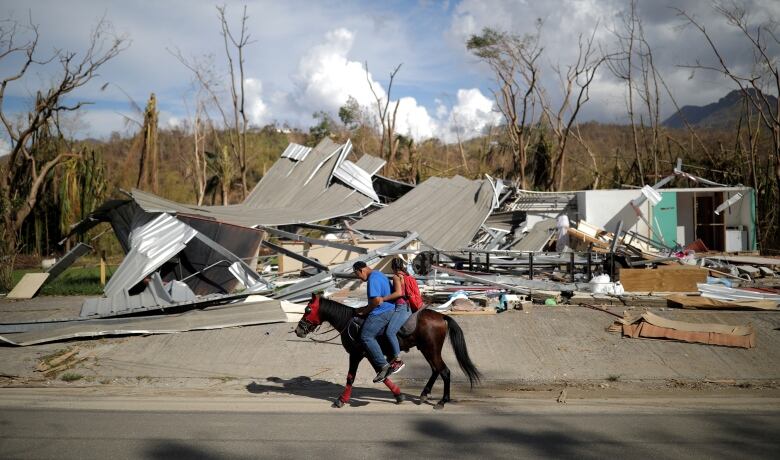 Local residents ride a horse by a destroyed building on Oct. 4, 2017, after Hurricane Maria hit the town of Jayuya. (Carlos Barria/Reuters)

The study says the original estimates were so low because doctors on the island had not been trained to properly classify deaths after a natural disaster.

The U.S. Centres for Disease Control and Prevention provides doctors with a set of recommendations for counting such deaths as those caused by natural disasters, but the guidelines were almost never followed by Puerto Rican doctors in the chaos after the storm.

Puerto Rico's government, which is neither Republican nor Democratic, but run by the New Progressive Party, a pro-statehood, Puerto Rico-only party, accepted the 2,975 number as a legitimate estimate of the storm's true toll.

Throughout the week, the president has repeatedly defended his administration's efforts in Puerto Rico, calling it it an "incredible, unsung success" and renewed his verbal spat with Cruz, the San Juan mayor.

Hurricane Maria hit last year as the Trump administration was feeling positive about the handling of massive hurricanes in Florida and Texas last summer. Then came Maria and devastation in Puerto Rico, where a slow federal response was complicated by logistical concerns and pre-existing economic and infrastructure deficiencies on the island territory.

Puerto Rico Gov. Ricardo Rossello seized on Trump's use of the word "successful" and said in a statement, "No relationship between a colony and the federal government can ever be called 'successful' because Puerto Ricans lack certain inalienable rights enjoyed by our fellow Americans in the states." 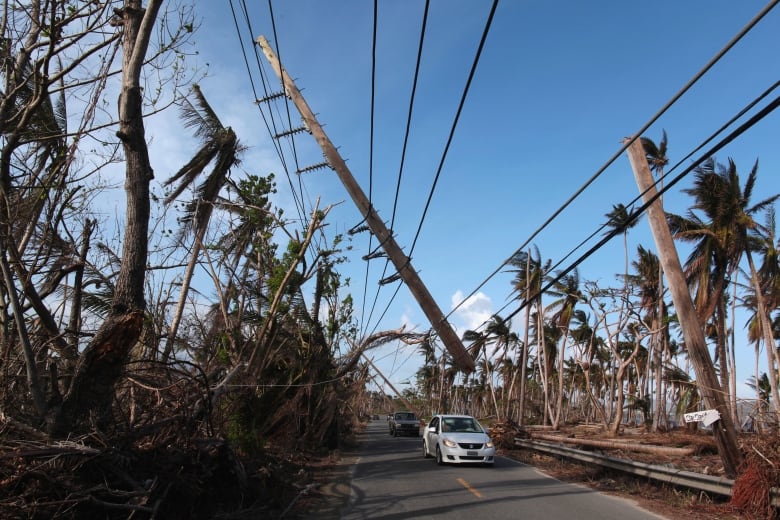 Puerto Rico has been a U.S. territory since 1898. Its inhabitants are U.S. citizens, though they are barred from voting in presidential elections and have only one congressional representative with limited voting powers.

Rossello said Maria was "the worst natural disaster in our modern history," and that work remained before the island could move on to other stages of recovery. He also said he was waiting for Trump to respond to a petition to help Puerto Rico complete work on emergency housing restoration programs and debris removal.

Trump, who has struggled to express public empathy in times of national crisis, sparked outrage during his post-Maria visit to Puerto Rico when he feuded with San Juan's mayor and passed out paper towels to victims like he was shooting baskets.

Trump later said Puerto Ricans were fortunate that Maria was not a catastrophe on the scale of Hurricane Katrina, which hit the U.S. Gulf Coast. All told, about 1,800 people died in that 2005 storm.