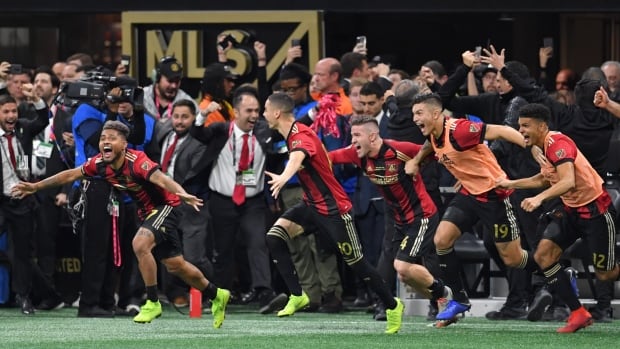 Finally, Atlanta has another team it can call champions.

Josef Martinez and Franco Escobar scored goals, Brad Guzan came up with a couple of clutch saves and Atlanta United gave the city its first title since 1995 with a 2-0 victory over the Portland Timbers in the MLS Cup final Saturday night.

Cheered on by the largest crowd in franchise history, United captured the crown in just its second season to set off a huge celebration in a city that has known so much sporting heartbreak. Owner Arthur Blank got to lift the trophy — less than two years after his other team, the NFL's Falcons, squandered a 25-point lead in an epic Super Bowl collapse.

"My first night in my new house in Atlanta, I went to bed at halftime of the Super Bowl," defender Jeff Larentowicz said. "I woke up and I read the headlines and I couldn't believe what I saw."

"Hopefully, we can transcend that past," Larentowicz said, "and move on to a new future for the city."

Martinez scored the winner in Atlanta's 2-0 win over Portland in the MLS Cup Final. 1:20

Martinez, capping the greatest goal-scoring season in MLS history, put United ahead in 39th minute. Escobar added an insurance goal in the 54th, turning the final minutes into a raucous, flag-waving celebration and sending coach Tata Martino out with a title in his final game as coach. He's reportedly headed to Mexico to take over as that country's national coach.

"If I had to choose the way to leave somewhere, this is the best way," Martino said. "This is the way I wanted it to happen."

Atlanta reveled in its first title since the Braves won the 1995 World Series — a gap of 8,442 days, for those counting.

"Most of us aren't from here, so we don't know the pain that they've been through," said United captain Michael Parkhurst, who finally won an MLS title after playing on four runner-up teams. "I'm just happy that we could come through for them tonight. I know there were a lot of anxious and stressed-out fans."

After a surprising run in the playoffs, the Timbers were denied their second MLS championship after winning the cup in 2015. They prevailed on the road at Dallas, Seattle and Kansas City before coming up short in Atlanta.

"I'm extremely proud of the work we've had the entire season," coach Giovanni Savaarese said. "To be able to get to the MLS Cup, we played a lot of difficult teams."

Since major league sports came to Atlanta in 1966, the only other team to win a championship in one of the five major sports also came on the soccer pitch. The Atlanta Chiefs claimed the title in the North American Soccer League's inaugural season in 1968.

While that team laid the groundwork, Atlanta United carried the sport to unprecedented levels in North America. The team shattered the MLS attendance record a year ago in its first season, and then took the mark even higher by averaging more than 53,000 per game this year — a level of support that would fit right in with the Premier League or La Liga. The crowd of 73,019 easily eclipsed the previous record for an MLS Cup — 61,316 at New England's Gillette Stadium in 2002.

Almost as soon as the final whistle blew, a victory parade through the streets of Atlanta was announced for Monday.

Queen's "We Are The Champions" blared throughout Mercedes-Benz Stadium.

United kept the ball in Portland's end of the field much of the first half.

When the home team broke through, it was only appropriate that it was Martinez putting the ball in the net.

Portland tried to clear the ball, but a sliding tackle by United defender Michael Parkhurst sent the ball rocketing back toward the Timbers net. Martinez managed to win possession from Jeremy Ebobisse at the top of the area, leaving the most prolific goal scorer in league history all alone against goalkeeper Jeff Attinella.

It was no contest. Martinez, the league's MVP and Golden Boot winner after scoring a record 31 goals during the regular season, cut to his right to escape the sprawling keeper, easily sliding the ball into an open net to send the packed house into a uproar.

"I was feeling a lot of pressure before the game," said Martinez, who added four more goals in the playoffs. "My neighbours were putting flags all around my house and pushing notes under my door."