The latest UN sanctions against North Korea are an act of war and tantamount to a complete economic blockade against it, North Korea’s foreign ministry said on Sunday, threatening to punish those who supported the measure.

The UN Security Council unanimously imposed new sanctions on North Korea on Friday for its recent intercontinental ballistic missile test, seeking to limit its access to refined petroleum products and crude oil and its earnings from workers abroad.

The UN resolution seeks to ban nearly 90 per cent of refined petroleum exports to North Korea by capping them at 500,000 barrels a year and, in a last-minute change, demands the repatriation of North Koreans working abroad within 24 months, instead of 12 months as first proposed.

The U.S.-drafted resolution also caps crude oil supplies to North Korea at 4 million barrels a year and commits the council to further reductions if it were to conduct another nuclear test or launch another ICBM.

In a statement carried by the official KCNA news agency, North Korea’s foreign ministry said the United States was terrified by its nuclear force and was getting “more and more frenzied in the moves to impose the harshest-ever sanctions and pressure on our country.”

The new resolution was tantamount to a complete economic blockade of North Korea, the ministry said.

“We define this ‘sanctions resolution’ rigged up by the U.S. and its followers as a grave infringement upon the sovereignty of our Republic, as an act of war violating peace and stability in the Korean peninsula and the region and categorically reject the ‘resolution,'” it said.

“There is no more fatal blunder than the miscalculation that the U.S. and its followers could check by already worn-out ‘sanctions’ the victorious advance of our people who have brilliantly accomplished the great historic cause of completing the state nuclear force,” the ministry said.

North Korean leader Kim Jong-un on Nov. 29 declared the nuclear force complete after the test of North Korea’s largest-ever ICBM test, which the country said puts all of the United States within range. 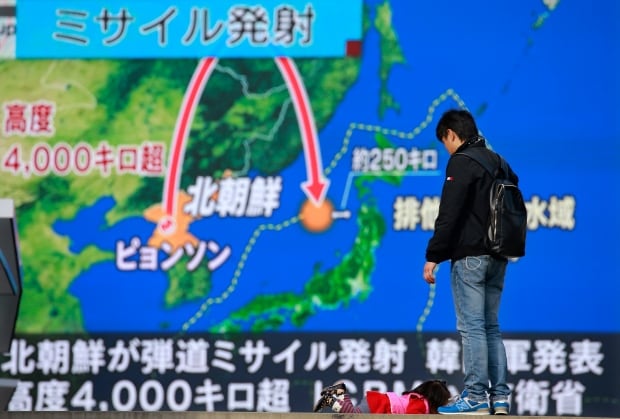 Kim told a meeting of members of the ruling Workers’ Party on Friday that the country “successfully realized the historic cause of completing the state nuclear force” despite “short supply in everything and manifold difficulties and ordeals owing to the despicable anti-DPRK moves of the enemies.”

South Korea’s foreign ministry told Reuters it is aware of the North Korean statement on the new sanctions, again highlighting its position that they are a “grave warning by the international community that the region has no option but to immediately cease reckless provocations, and take the path of dialogue for denuclearization and peace.”

The North Korean foreign ministry said its nuclear weapons were a self-defensive deterrence not in contradiction of international law.

“We will further consolidate our self-defensive nuclear deterrence aimed at fundamentally eradicating the U.S. nuclear threats, blackmail and hostile moves by establishing the practical balance of force with the U.S,” it said.

North Korea said those who voted for the sanctions would face its wrath.

“Those countries that raised their hands in favour of this ‘sanctions resolution’ shall be held completely responsible for all the consequences to be caused by the ‘resolution’ and we will make sure for ever and ever that they pay heavy price for what they have done.”

The North’s old allies China and Russia both supported the latest UN sanctions.

Tension has been rising over North Korea’s nuclear and missile programmes, which it pursues in defiance of years of UN Security Council resolutions, with bellicose rhetoric coming from both Pyongyang and the White House.

China, with which North Korea does some 90 per cent of its trade, has repeatedly called for calm and restraint from all sides.

China said on Saturday the new resolution also reiterated the need for a peaceful resolution via talks and that all sides needed to take steps to reduce tensions.

“The difference between the new resolution and the original U.S. proposal reflects the will of China and Russia to prevent war and chaos on the Korean Peninsula. If the U.S. proposals were accepted, only war is foreseeable,” it said in an editorial.

Xi Jinping may have opened China’s Communist Party Congress as “first among equals,” but he walks away as much more than that. He’s now likely the most powerful leader this country’s known since Mao Zedong.

And in declaring the start of a “new era,” he’s more determined than ever to leave his mark on China in this second five-year term as president. He may even buck convention to stay in charge long beyond that, to continue leading what he calls the “great rejuvenation of the Chinese nation.”

Xi’s manoeuvring at the congress made him bigger.

As he stepped out to unveil his seven-member leadership team — the party’s politburo standing committee, which the official party voice People’s Daily called a “dream team” — it was clear he had manoeuvred well. 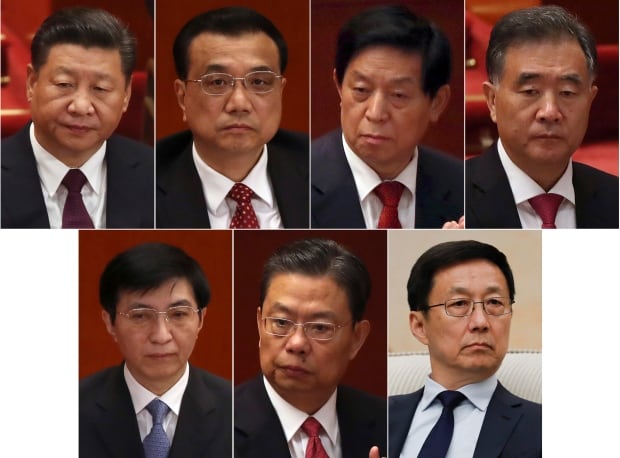 He is among allies, without a challenger. He made sure that none of the new members is young enough to be considered for the top job once this term is over. Everyone is in his sixties. No one has near enough political clout to challenge Xi, 64.

Xi also chose not to name a successor, the normal act of a Chinese leader once he reaches the halfway point of his expected decade in power. No potential challenger there, either.

He even led the delegates in enshrining what’s become known as “Xi Thought” in the party’s constitution, the first living Chinese leader since Mao to embed himself so firmly in a document that will outlive Xi himself.

“The congress unanimously agrees that Xi Jinping Thought shall constitute a guide to the action of the party,” it was announced at the closing ceremony. The official title of the concept is “Xi’s Thought on Socialism with Chinese Characteristics for a New Era.” 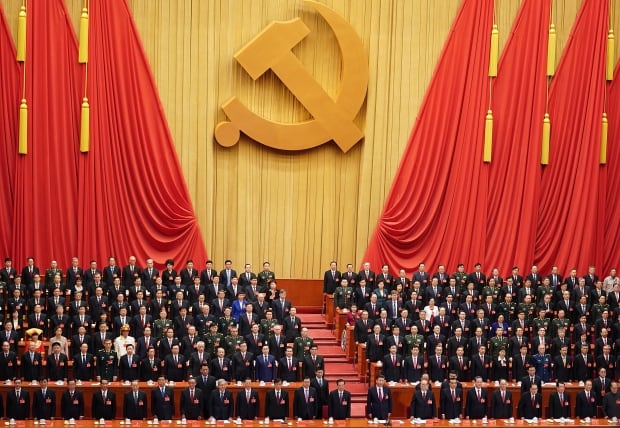 Xi and other Chinese politicians and delegates listen to the national anthem during the closing of the 19th Communist Party Congress. (Lintao Zhang/Getty Images)

Some worry all of this might have gone a bit too far, raising the risk of a future crisis.

Opposing or criticizing Xi has now become tantamount to attacking the party, says Zhang Lifan, an economist and political observer at the Beijing Institute of Technology.

“It’s clear the leader has tightened his grip on power,” he said. “But that also means the risk of making mistakes has also gone up, since there is no adequate mechanism to correct mistakes” in the party.

“Also, the leader has to stay healthy,” he adds, “since we are without an heir.”

In terms of Xi’s policies, China’s direction isn’t expected to change, though the rules may become better defined — and tougher.

Party members will still face discipline. More than a million have already been punished for corruption, including generals, top officials and low-level bureaucrats. The hunt for these “tigers and flies,” as Xi calls them, will continue. And targets may well include his political rivals. 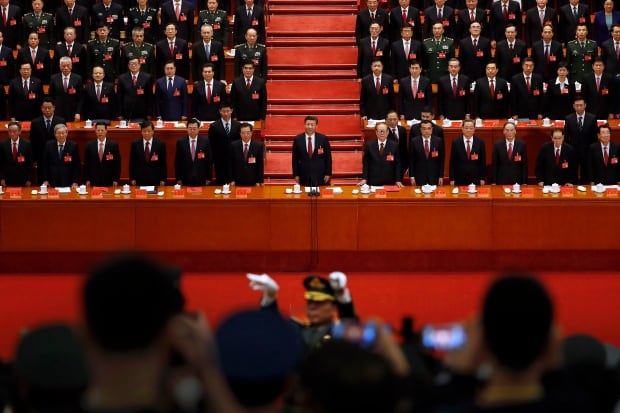 Xi, front row centre, stands with his cadres during the Communist song at the closing ceremony for the 19th Party Congress at the Great Hall of the People in Beijing, on Oct. 24, 2017. There are 89 million members in the organization. (Andy Wong/Associated Press)

The party’s will — including arbitrary rules on morality — will continue to be imposed on the country. Xi has cracked down hard on human rights activists, NGOs and dissidents. These groups expect things to get even worse.

This regime “can do anything with impunity,” says Sharon Hom, executive director of Human Rights in China. With the Communist Party’s pronouncements, “there’s not a lot of space for independent voices,” she says.

To make sure they do, China is developing an unprecedented arsenal of tools to follow people’s movements and purchases, listen to their calls and censor their words, even in private communications.

In Xi’s next term China plans to build an enormous database of every citizen’s face. To be recognized and monitored electronically.

Through this congress, Xi has also sharpened his rhetoric on China’s international intentions.

His tenure has already seen a new Beijing assertiveness on issues such as sovereignty over land and sea, and an insistence on total control over what he sees as Chinese territory — including Hong Kong and Taiwan.

Here, his emphatic insistence on that drew loud applause. “We will never allow anyone, any group, or any political party,” Xi told the party delegates, “to separate any part of Chinese territory from China.”

He also reaffirmed plans to strengthen the country’s military forces, repeatedly insisting that China is a “great power,” and that its “military is built to fight.”

“Our military must regard combat capability as the measure to meet in all its work, and focus on winning when called upon,” he said.

And he made clear China has no interest in taking a cue from the West or to “copy the foreign political model” of liberal democracies. It will go its own way, he said, “different from that of traditional great powers.”

Xi even talked about exporting China’s ideas through friendship and through financial help along the lines of his massive “Belt and Road” infrastructure project that is spreading across Asia and into Africa and Europe, though countries like India have viewed China’s motives with suspicion.

China’s desire to take center stage globally is expected to grow, now that Xi is more firmly in control and ready to “act big.”