Cuba's deep involvement in Venezuela is causing new tensions in the historically close relationship between Canada and Cuba, with Nicolas Maduro increasingly leaning on the Cubans to keep him in power as Venezuelans turn against him.

Thousands of Cubans live and work in Venezuela, many in the most sensitive structures of the Bolivarian state apparatus: the armed forces and the military counter-intelligence service DGCIM; Venezuela's secret police SEBIN; and among Nicolas Maduro's inner circle and bodyguard.

Their presence — and the perception that Cubans are calling the shots in the country — have led to widespread public anger against them in Venezuela, including calls on social media to ostracize them. 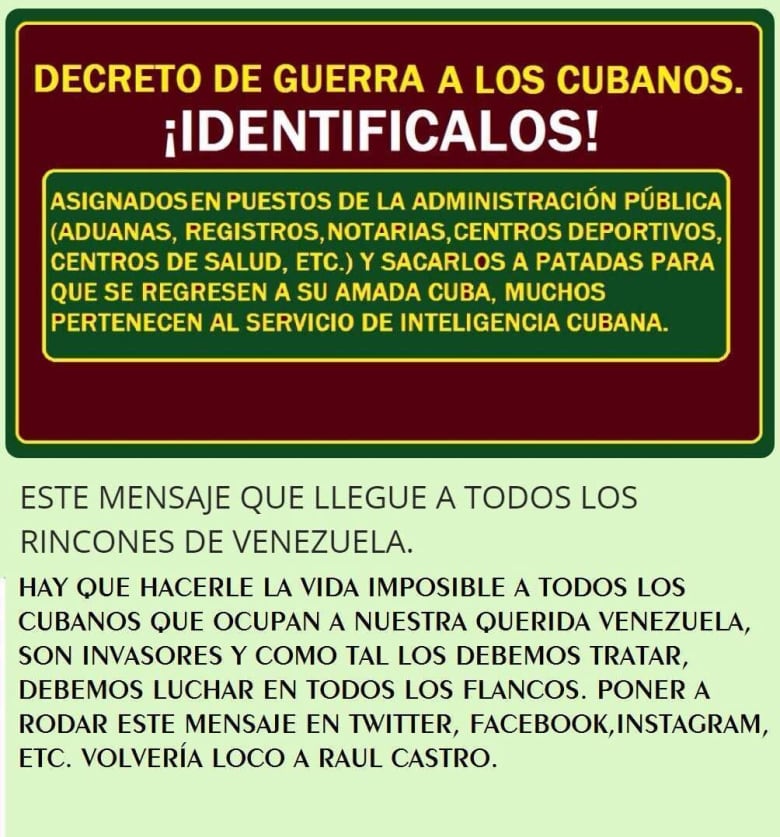 A message circulating on social media in Venezuela: "Declaration of war on Cubans. Identify them! Assigned to jobs in public administration (customs, registries, notaries, sports centres, health centres, etc.) and kick them out so they go back to their beloved Cuba, many belong to the Cuban Intelligence Service." (CBC)

So far, Canada has been reluctant to call out a government that Prime Minister Justin Trudeau called an "ally" during a 2016 visit to Havana. But Foreign Affairs Minister Chrystia Freeland says Cuba's role is "concerning".

"The issue of the Cuban role in Venezuela was discussed at the Lima Group meeting in Bogota on Monday," she told CBC News. "We have heard directly from the Venezuelan opposition that they're concerned by the role that some Cubans are playing in their country."

'Two dictatorships in one'

She added that Canada calls on Cuba "to allow the Venezuelan people what they have a right to, and what they deserve, which is for their constitution to be respected and for them to be able to have a peaceful transition to democracy."

Michael Lima Cuadra is a Cuban-Canadian historian and democracy activist who says the Maduro government partly has Cuba to thank for its continued survival despite deep unpopularity.

"As long as the Castro regime is not held accountable internationally for its intervention in Venezuela, it's going to continue sending a private army of almost 15,000 intelligence operators, which are the ones responsible for Maduro holding on to power.

"As a historian I've never seen a Latin American dictatorship resist so much pressure from so many people. So the know-how of repression that's being exported by the Castro regime has to be confronted by Canada and the Lima Group. As long as that doesn't happen, Venezuelans are going to face two dictatorships in one."

On Feb. 21, Maj.-Gen. Hugo Carvajal, Venezuela's former chief of intelligence and once the right-hand man of then-president Hugo Chavez, turned on the Maduro regime in a spectacular video statement, pronounced with the Caracas skyline behind him.

After praising the army that once liberated Venezuela, he said: "It can't be possible that that same army, now in the hands of generals subjugated to Cuban commands, has become the main collaborator of a dictatorial system designed to afflict our people with misery."

CBC News in Venezuela spoke to two former Venezuelan officers, recently departed from the armed forces, who said there was widespread discontent in the ranks at having to take orders from Cubans.

Venezuelan military analyst Rocio San Miguel told CBC there is also a longtime Cuban presence in the Strategic Operations Centre of the Venezuelan armed forces under the command of Admiral Remigio Ceballos Ichaso.

Military sources confirmed to CBC News in Venezuela that Cubans are prominent in the hunt for "traitors" in the armed forces, which have seen hundreds of defections to Colombia since Feb. 23.

Cubans are also in Miraflores, the presidential palace. Last week, Nicolas Maduro lost his temper during an interview with Jorge Ramos of U.S. network Univision, after Ramos showed him video of Venezuelans grabbing food from the back of a garbage truck.

He stormed out and his guards took over, locking the crew in a dark room and confiscating their camera discs. After they were deported from Venezuela, Mexican native Ramos and his Cuban producer Maria Martinez-Guzman said the agents who stole their interview were Cuban. Indeed, Maduro has been forced into ever closer dependence on Cubans as defections by Venezuelans have reached right into the upper ranks of Maduro's presidential honour guard. 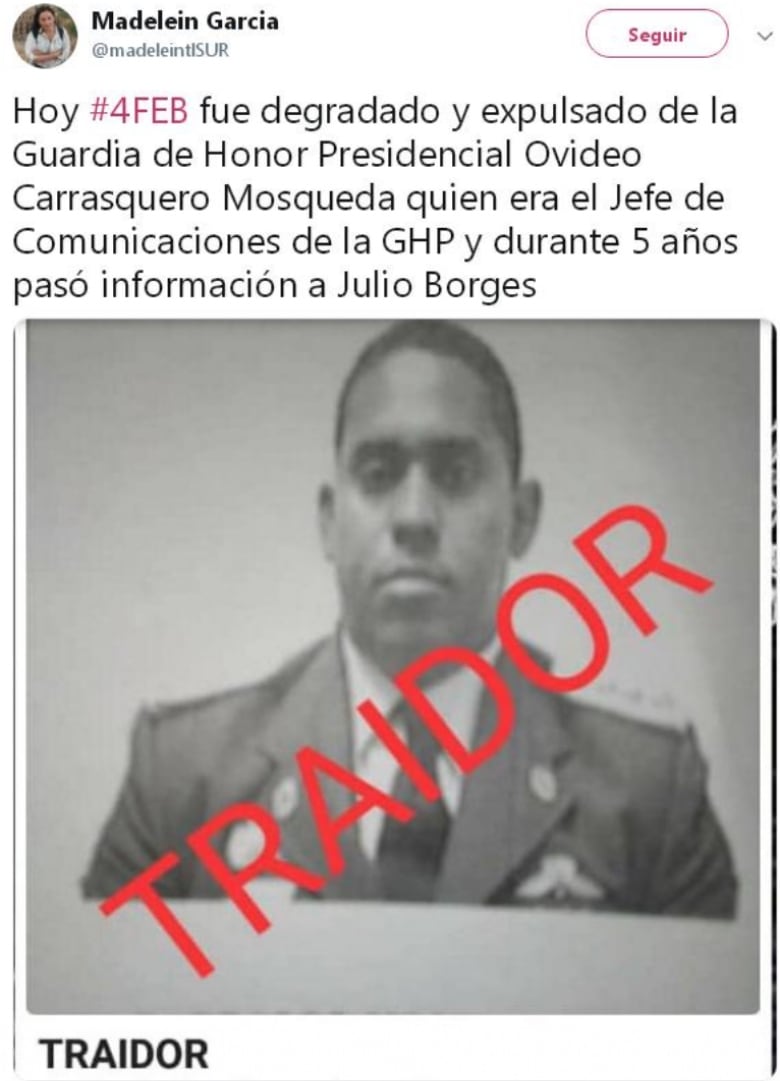 Col. Ovideo Carrasquero of President Nicolas Maduro’s Presidential Honour Guard was arrested in February and accused of working with the opposition, as reported (and subsequently deleted) by Venezuelan state media TeleSur. (CBC/Twitter)

"Cuba and Venezuela have always demonstrated that 'yes we can'," said Nicolas Maduro as he sat down with his Cuban counterpart in Havana in April last year.

Maduro was the first (and one of the few) world leaders to visit Miguel Diaz-Canel as the first non-Castro took the reins of power as president of revolutionary Cuba. Thousands of Cubans live and work in Venezuela, and while some do work that is harmless or beneficial, such as doctors, others are at the heart of the Maduro regime's machinery of repression. 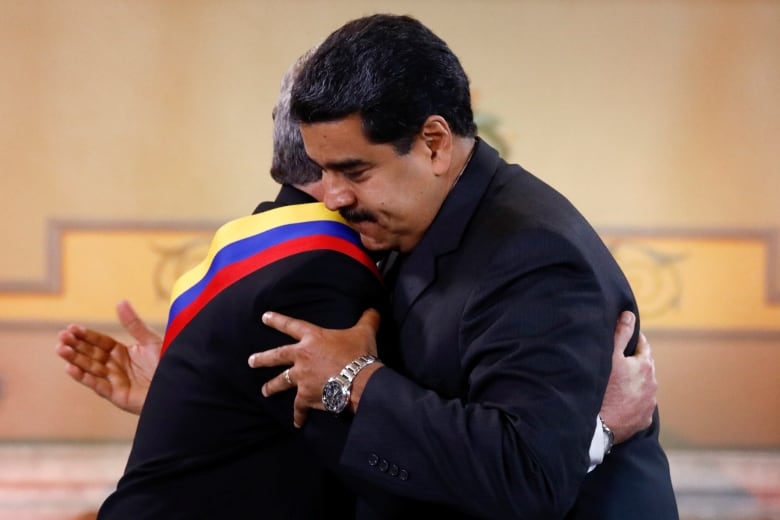 Maduro and Diaz-Canel, wearing a Venezuelan flag sash, hug during their meeting at the Miraflores Palace in Caracas, Venezuela, in May 2018. Maduro was one of the first leaders to greet Diaz-Canel when he took power. (Marco Bello/Reuters)

The connection has a long history.

The collapse of the Soviet Union in 1991 brought greater freedom to Eastern Europe, but to Cuba only hunger and hardship. The island's economy was built around exchanging Cuban sugar for Russian oil. Cuba's oil imports dropped by 90 per cent, leaving the country almost without gasoline or fertilizer.

During the so-called Special Period that followed, severe food rationing caused Cubans to lose an average of 20 pounds.

Today, Cuba has largely recovered from that hardship, and it is Venezuelans who are going hungry. Cuba lies less than 1,000 kilometres from Venezuela's oil heartland, and in the early '90s the Castros saw in Venezuela a political movement that might take the place of the Soviet Union.

Thirty years ago this week Venezuela erupted in nine days of deadly riots known as the Caracazo, that began as a protest against austerity. In the aftermath, a secret movement of Venezuelan officers formed around a charismatic paratrooper called Lt.-Col. Hugo Chavez.

Chavez leaped to fame in 1992 with two failed coup attempts, the second while he was in prison for the first.

When Chavez was pardoned in 1994, Fidel Castro invited him to Havana. Thus began a relationship that would ultimately lead to a near merger of the two countries' security organs.

In the late '90s, Chavez gave up on coups and decided to try the electoral path to power, which proved successful.

Following his inauguration in 1999, he returned to Havana and announced: "Venezuela is travelling towards the same sea as the Cuban people, a sea of happiness and of real social justice and peace.… I appeal for the unity of our two peoples, and of the revolutions that we both lead." Critics have argued that Venezuela could have achieved a better return for its oil by selling it on international markets and investing the money in training its own people. But at least in the early days of "Cubazuela" there were tangible benefits for poor Venezuelans.

In April 2002, President Chavez was himself the target of a coup. The attempt failed, but it increased Chavez's distrust of his own officers, and was the beginning of an ever-deeper dependence on Cubans to secure his government.

Nicolas Maduro's wife, Cilia Flores, a prominent member of Chavez's inner circle and today Venezuela's first lady, encouraged Chavez to draw closer to Cuba, and by 2008 her husband Nicolas, then foreign minister, declared, "We have become a single people, a single nation."

Today, says Lima Cuadra, the symbiosis of the two governments is such that either one would have trouble surviving without the other.

And so, he says, neither Cuba's new president, Diaz-Canel, nor his officially retired mentor, Raul Castro, is likely to listen to Canadian appeals to withdraw support.

Global Affairs Canada's director for the Americas, Michael Grant, told a Senate committee last week that that has indeed been the reaction.

"Recently we held our annual discussions on a senior level," he told the committee, "and I can tell you that Venezuela was a topic of those discussions, with a view to sharing points of view and trying to find a common way forward.

"Did we? No. We have a fundamental disagreement." Lima Cuadra says the Cuban Communist Party can't afford to give up on Maduro, and believes its fate may be tied to that of the United Socialist Party of Venezuela.

"Ideologically, it would be equivalent to the fall of the Berlin Wall. '21st century socialism' would collapse. It would be the biggest international failure of the Castro regime. So on both fronts, economic and ideological, it would be a major defeat."