U.S. President Donald Trump began his presidency on the resonance of his aggressive "America First" agenda, and now, as he is set to address the UN General Assembly today, is expected to deliver a speech that will focus on that message, as well as his country's role in foreign matters.

Nikki Haley, the U.S. ambassador to the United Nations, told reporters in a preview of Trump's visit that the president's focus "will be very much on the United States," its role and the relations it wants to build.

"He is looking forward to talking about foreign policy successes the United States has had over the past year and where we're going to go from here," she said. "He wants to talk about protecting U.S. sovereignty," while building relationships with nations that "share those values."

Between promoting the wisdom of his rapprochement with North Korea's Kim Jong-un and railing against Iran's malign influence across the Middle East, Trump has found himself forced to confront the growing shadows of domestic political troubles.

White House aides had cast Trump's visit to New York in triumphal terms: an opportunity to assert American sovereignty before the multinational body. He was set to be unapologetic about his decisions to engage with the erstwhile pariah North Korea, remove the U.S. from the Iran nuclear accord and object to UN aid programs he believes are contrary to American interests. 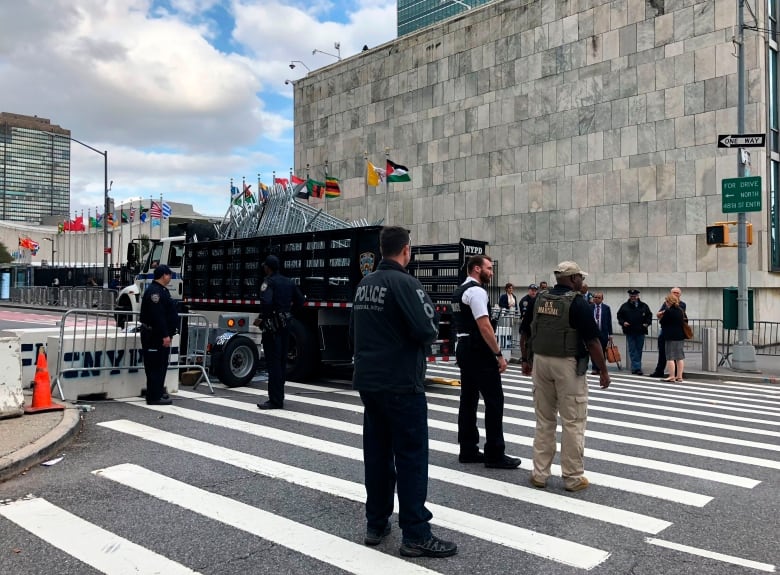 Security and police monitor the entrance to the UN in New York on Monday, a day before the start of the general debate of the 73rd session of the General Assembly. This year, 133 world leaders have signed up to attend the session, which ends Oct. 1, up from 114 leaders last year. (Daniel Slim/AFP/Getty Images)

Trump is to address the General Assembly on Tuesday morning and will chair a meeting Wednesday of the UN Security Council on the topic of counterproliferation. The four days of choreographed foreign affairs were to stand in contrast to a presidency largely defined by disorder.

Trump on Tuesday tweeted that he had no intention to meet with his Iranian counterpart, Hassan Rouhani, on the sidelines of the General Assembly.

"Despite requests, I have no plans to meet Iranian President Hassan Rouhani. Maybe someday in the future. I am sure he is an absolutely lovely man!" Trump wrote.

Appearances on the global stage tend to elevate the stature of presidents both abroad and at home. But even before his arrival for the annual bonanza of world leaders and diplomats, the desired image was muddied by confusion in Washington.

The fate of his second Supreme Court nominee, Brett Kavanaugh, was cast into fresh doubt over the weekend amid a second allegation of sexual misconduct.

Drama also swirled Monday around the status of his deputy attorney general. Rod Rosenstein was reported last week to have floated the idea of secretly recording Trump last year and to have raised the idea of using the 25th Amendment to remove Trump from office. The man overseeing special counsel Robert Mueller's Russia probe and a frequent target of Trump's ire offered to resign and fully expected Monday to be fired. He received a stay of punishment at least until Thursday, when he is to meet with Trump at the White House.

A year ago, Trump stood at the international rostrum and derided the North Korean leader as Little Rocket Man, and threatened to "totally destroy North Korea."

"It was a different world," Trump said Monday of his then moniker for the North Korean leader. "That was a dangerous time. This is one year later, a much different time."

Trump praised Kim as "very open" and "terrific," despite the sluggish pace of progress toward denuclearization on the Korean Peninsula.

"You are the only person who can solve this problem," Moon said to Trump, relaying Kim's words.

The president said the location for a second summit with Kim is still to be determined, but officials have said Trump is holding out hope it could take place on American soil. Such a move would present a complex political and logistical challenge for the North Korean leader. Trump has often fondly invoked the Singapore summit, a made-for-TV event that attracted the world's media attention and largely received positive marks from cable pundits — reviews that were not repeated for his summit with Russia's Vladimir Putin in Helsinki the following month.

Trump and Moon on Monday signed a new version of the U.S.-South Korean trade agreement, marking one of Trump's first successes in his effort to renegotiate economic deals on more favourable terms for the U.S. Trump labelled it a "very big deal" and said the new agreement makes significant improvements to reduce the trade deficit between the countries and create opportunities to export American products to South Korea. 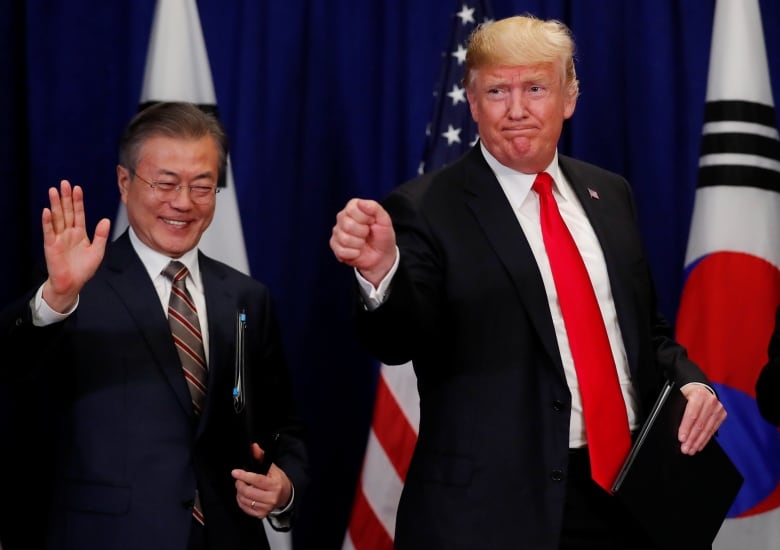 In both venues, U.S. officials say, Trump is expected both on Tuesday and Wednesday to offer a contrast between the path of negotiation chosen by North Korea and that of Iran. Trump earlier this year bucked allies and removed the U.S. from the 2015 Iran nuclear deal, citing Iran's malign influence in the region and support for groups like Hezbollah. The next round of tough sanctions on Iran is set to go into effect in November.

U.S. President Donald Trump is outlining a new national security strategy that refocuses the United States’ relationship with the rest of the world, essentially implementing Trump’s “America First” mantra on a global scale.

It envisions nations in constant competition, reverses Obama-era warnings on climate change, and affirms that the United States will unilaterally defend its sovereignty, even if that means risking existing agreements with other countries that have dominated the United States’ foreign policy since the Cold War.

The Republican president will detail his plan Monday, one that if fully implemented could sharply alter U.S. international relationships.

The plan, according to senior administration officials who offered a preview Sunday, is to focus on four main themes: protecting the homeland; promoting American prosperity; demonstrating peace through strength; and advancing U.S. influence in an ever-competitive world.

Trump’s doctrine holds that nation states are in perpetual competition and that the U.S. must fight on all fronts to protect and defend its sovereignty from friend and foe alike.

While the administration often says that “America First” does not mean “America Alone,” the national security strategy to be presented by Trump will make clear that the United States will stand up for itself even if that means acting unilaterally or alienating others on issues like trade, climate change and immigration, according to people familiar with the strategy. 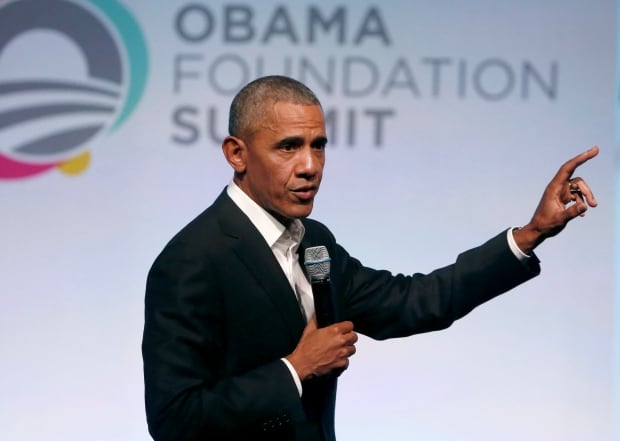 Trump’s national security plan is said to reverse an assertion in 2015 by former president Barack Obama, seen in this Oct. 31 file photo, that climate change is a threat to American security. (Charles Rex Arbogast/Associated Press)

The last such strategy document, prepared by then President Barack Obama in 2015, declared climate change an “urgent and growing threat to our national security.” A senior official said the Trump plan removes that determination — following the administration’s threat to pull out of the Paris climate accord — but will mention the importance of environmental stewardship.

Despite the risk of potential isolation presented by Trump’s strategy, its fundamentals are not a surprise. The Associated Press last week reviewed excerpts of a late draft of the roughly 70-page document and spoke to two people familiar with it.

The draft emphasizes that U.S. economic security is national security and that economic security must be ensured with military might. And they said it would stress the U.S. is interested only in relationships with other countries, including alliances like NATO, that are fair and reciprocal.

Trump, according to the senior officials, is also expected to discuss threats he’ll deem as “rogue regimes,” like North Korea, and “revisionist powers,” like Russia and China, who aim to change the status quo, such as Moscow and its actions with Ukraine and Georgia, and Beijing in the South China Sea. 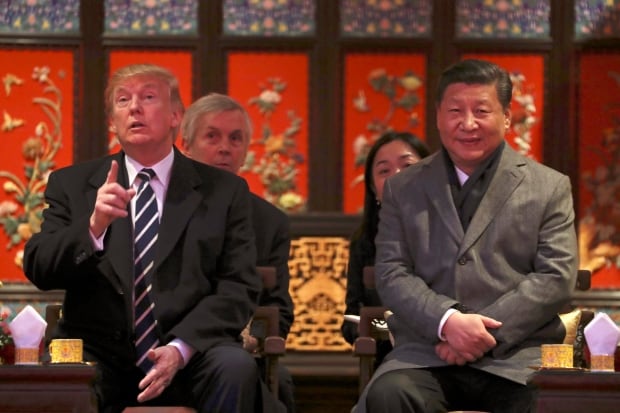 Trump also plans to renew his call for the member states in the United Nations and NATO to spend more on defence, saying that the United States will insist on its alliances being fair and reciprocal.

The senior officials said the document refers to China as a “strategic competitor,” rather than the stronger accusation of “economic aggression” previewed last week by National Security Adviser H.R. McMaster.

Despite international challenges, the document cites emerging opportunities to advance American interests in the Middle East.

“Some of our partners are working together to reject radical ideologies and key leaders are calling for a rejection of Islamist extremism and violence,” it says. “Encouraging political stability and sustainable prosperity would contribute to dampening the conditions that fuel sectarian grievances.”

The strategy document asserts that “for generations the conflict between Israel and the Palestinians has been understood as the prime irritant preventing peace and prosperity in the region. Today, the threats from radical jihadist terrorist organizations and the threat from Iran are creating the realization that Israel is not the cause of the region’s problems. States have increasingly found common interests with Israel in confronting common threats.” 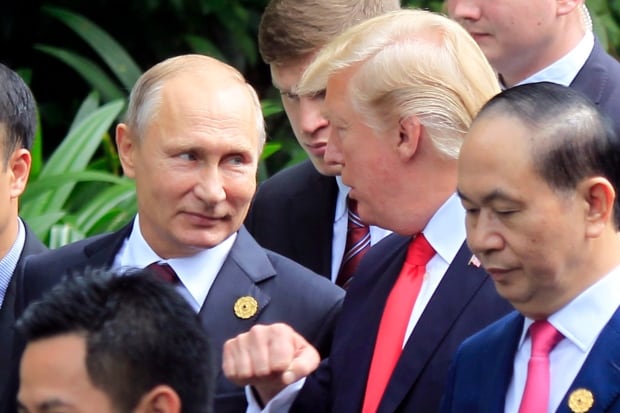 Russian President Vladimir Putin, left, and Trump talk as they arrive for a photo during the Asia-Pacific Economic Cooperation (APEC) Summit in Danang, Vietnam, last month. Despite a recent exchange of niceties between the two leaders, Trump’s new security strategy is expected to criticize Russia. (Hau Dinh/Associated Press)

The criticism of Russia will come as a break from recent warm words between Trump and Russian President Vladimir Putin. The leaders have spoken twice in four days, with Trump calling Putin to thank him for kind words about the U.S. stock market and Putin reaching out to Trump to thank the CIA for help in stopping a terror plot in St. Petersburg.

The strategy document will not make explicit reference to Russian attempts to meddle in the U.S. political system, but an official said it would highlight the importance of ensuring the resilience of U.S. democratic institutions.

The early draft of the strategy reviewed by the AP lamented that America had put itself at a disadvantage by entering into multinational agreements, such as those aimed at combating climate change, and introducing domestic policies to implement them.

The senior officials spoke on condition of anonymity to discuss the plan before the president’s remarks.