In a striking anonymous broadside, a senior Trump administration official claimed to be part of a group "working diligently from within" to impede U.S. President Donald Trump's "worst inclinations" and ill-conceived parts of his agenda, in an opinion piece in the New York Times on Wednesday.

Trump called the article "gutless" and "really a disgrace," while his press secretary called on the official to resign.

The writer — claiming to be part of the "resistance" to Trump, though not in the left-wing sense — says "many Trump appointees have vowed to do what we can to preserve our democratic institutions while thwarting Mr. Trump's more misguided impulses until he is out of office."

We believe our first duty is to this country.– Anonymous senior White House official

The newspaper describes the author only as "a senior official in the Trump administration."

A defiant Trump, holding an event with sheriffs at the White House, lashed out at the Times for publishing it.

Trump later tweeted: "TREASON?" before going on to demand the paper reveal its source. "The Times must, for National Security purposes, turn him/her over to government at once!" he tweeted.

Does the so-called “Senior Administration Official” really exist, or is it just the Failing New York Times with another phony source? If the GUTLESS anonymous person does indeed exist, the Times must, for National Security purposes, turn him/her over to government at once!

The publication immediately triggered a guessing game about the author's identity; on social media, in newsrooms and inside the West Wing, where officials were blindsided by its publication. 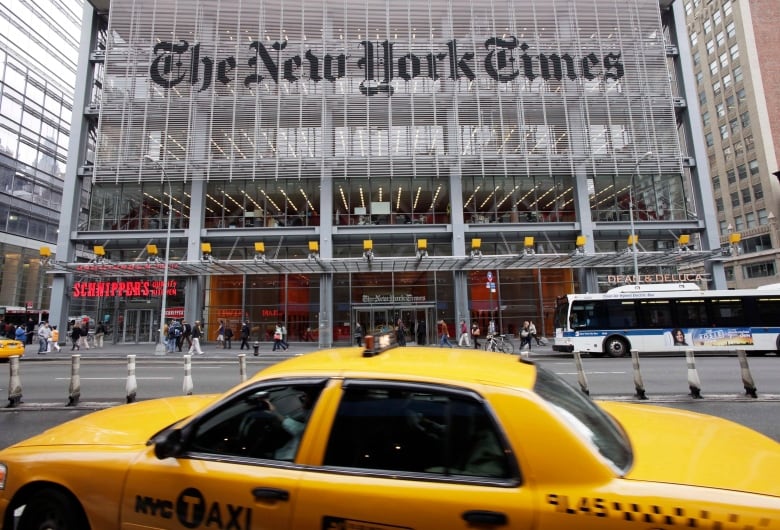 The New York Times said it took the 'rare step' of publishing the anonymous opinion piece because it is 'the only way to deliver an important perspective to our readers.' (Mark Lennihan/Associated Press)

In a blistering statement, White House press secretary Sarah Huckabee Sanders accused the author of choosing to "deceive" the president by remaining in the administration.

"He is not putting country first, but putting himself and his ego ahead of the will of the American people," she said.

"The coward should do the right thing and resign."

Sanders also called on the Times to "issue an apology" for publishing the piece, calling it "pathetic, reckless and selfish."

It was not immediately clear what, if any, steps were being taken by the White House to attempt to unmask the writer.

The column was published one day after the release of details from an explosive new book by longtime journalist Bob Woodward wherein Trump aides raise concerns about the president's judgment.

The Times op-ed under the headline "I Am Part of the Resistance Inside the Trump Administration."

The writer says Trump aides are aware of the president's faults and "we are trying to do what's right even when Donald Trump won't." 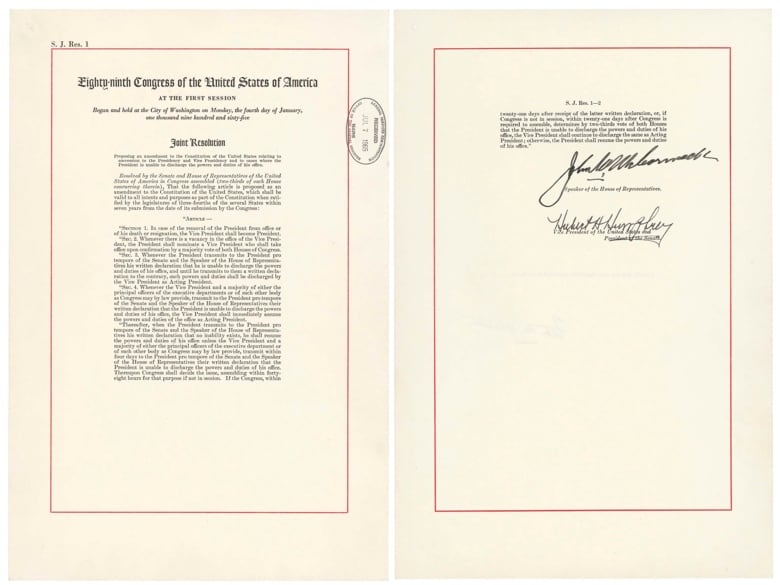 The 25th Amendment to the U.S. Constitution allows the vice-president to take over if the president is deemed 'unable to discharge the powers and duties of his office.' (National Archives /Associated Press)

The writer also alleges "there were early whispers within the cabinet of invoking the 25th Amendment" because of the "instability" witnessed in the president. That amendment to the U.S. Constitution allows for the transfer of power to the vice-president if the president is deemed "unable to discharge the powers and duties of his office."

The author writes that Trump is facing a challenge to his presidency far greater than special counsel Robert Mueller's Russia probe or the bitter divide among Americans about his leadership.

"Many of the senior officials in his own administration are working diligently from within to frustrate parts of his agenda and his worst inclinations. I would know. I am one of them.

The writer goes on to say, "We want the administration to succeed and think that many of its policies have already made America safer and more prosperous. But we believe our first duty is to this country, and the president continues to act in a manner that is detrimental to the health of our republic."