​Having intentionally steered England into what's widely considered the weaker half of the World Cup's knockout bracket, coach Gareth Southgate is now casting the upcoming quarter-final against Sweden as "bloody difficult."

Southgate sent out a crew of reserves who lost 1-0 to Belgium in their group-stage finale, and after both teams survived scares in the round of 16, Belgium now faces Brazil while England meets a Sweden side that gets far less respect.

But Sweden got to this same point by playing smart and unselfish soccer.

"Sweden are a team I respect hugely," Southgate said Wednesday. "You know we've not got a good record against them, I think we've always underestimated them. They've got good players and they've got a clear way of playing. It's bloody difficult to play against. They are greater than the sum of their parts more often than not."

The two teams meet Saturday at Samara Stadium for the right to advance to a semifinal against Russia or Croatia.

England hasn't won the World Cup since 1966, but Rob Pizzo shows that the road ahead looks pretty favourable.​ 1:46

The last was an exhibition in 2012. Zlatan Ibrahimovic scored four times to lead the Swedes to a 4-2 victory in Stockholm. Ibrahimovic is retired from international football now, and while Sweden has since forged a stout defensive identity, its post-Zlatan attack hasn't inspired fear in opponents.

The English are coming off a tense but ultimately euphoric game against Colombia in the Round of 16 game. After giving up an injury-time equalizer that forced a 1-1 draw, England triumphed 4-3 in a shootout.

It was a morale booster for the Three Lions, who had been knocked out of three World Cups on penalties since 1990. Harry Kane said the young English side grew up a lot in that match. 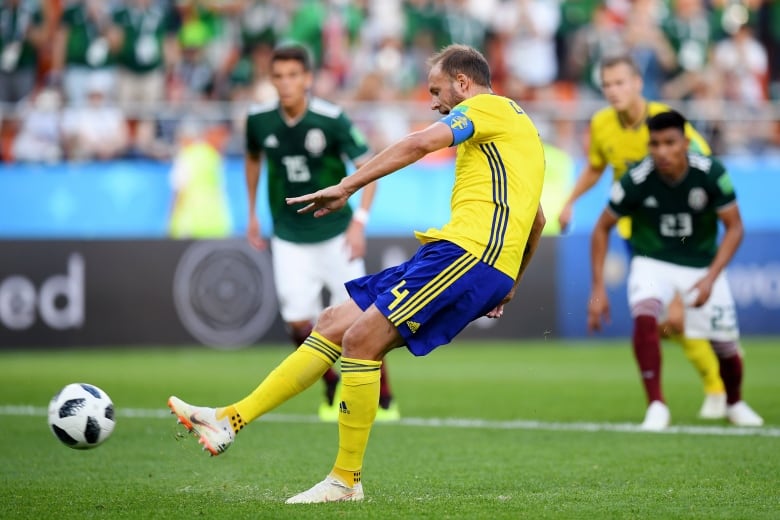 Andreas Granqvist's wife is expecting a baby any day, but the Swedish captain will not miss Saturday's match with England. (Matthias Hangst/Getty Images)

"It shows the togetherness, shows the character," Kane said. "We spoke about it before, but these are the moments you really see it."

England went 2-1-0 in the group stage to finish second to Belgium. The round was highlighted by Kane's hat trick in a 6-1 thrashing of Panama. Kane leads the field in Russia with six goals.

Sweden finished atop its group in Russia to face Switzerland in the opening match of the knockout round. Emil Forsberg scored on a deflection in the 66th minute of a grinding 1-0 victory.

Coach Janne Andersson was asked afterward if Sweden has been underrated at the World Cup.

"I think you'll have to ask everyone else that question. We know that we are a good team. We've earned our success we know how we've got this far," he said. "What other teams and countries think about that, that's not terribly interesting."

Fabian Delph is back with England after leaving Russia for the birth of his third child. He and his wife Natalie welcomed their daughter on Wednesday.

Delph left the team following its 1-0 loss to Belgium in the group stage finale and missed the match against Colombia.

Sweden captain Andreas Granqvist and his wife are expecting a child any day now, but the centre back says he won't sit out the match against England.

Sweden defender Mikael Lustig won't play Saturday because of yellow card accumulation. The right back collected his second yellow card of the tournament for a tug on Switzerland striker Josip Drmic in the first half of Tuesday's match in St. Petersburg.

The team will have Sebastian Larsson back from a ban, however, and the holding midfielder should go straight back into the starting lineup.