Supreme Court Justice Brett Kavanaugh has taken his place on the top U.S. court, but the ramifications of his contentious confirmation may spill over into the Nov. 6 midterms and possibly stymie a Democratic "blue wave."

The judge's confirmation amid sexual assault allegations has so enraged Democrat voters that it could motivate them to come out in droves to support their candidates and try and remove Republicans.

But the GOP has also been re-energized by what they perceive as an attempted Democratic hit job on Kavanaugh.

Tom Bevan, co-founder of the political website RealClearPolitics believes "the Kavanagh effect" is real. He said he can't be certain there's a correlation, but he has observed some Republicans in red states seem to be getting a bit of a boost in the polls.

He said the other big question is whether "this Republican intensity and outrage that was generated by these hearings" lasts into the midterms.

"If that dissipates, then the blue wave could be back on."

Republicans currently have control of the White House, the House of Representatives and the Senate. Historically, midterm elections spell bad news for the party in control of the presidency.

That, along with low approval numbers for President Donald Trump, had observers predicting a "blue wave," in which Democrats could regain control of the House and possibly the Senate.

All 435 House seats are in play for the midterms. For a Democratic victory, they would need to keep their current 194 seats while adding another 24.

Democrats are still favoured to win the House, but the wave may not be as powerful as once forecast. RealClearPolitics has the Democrats slightly leading the Republicans, with around 30 toss-up districts, which include five in California and three in New Jersey.

"The range of outcomes in the House is pretty dramatic. It could be everything from Dems winning 40 or 50 seats to Dems winning five seats," said Bevan.

"I think most most people who are looking at this stuff pretty closely think it's right on the knife's edge right now. Democrats are still favoured to win the House by a couple of seats. But you could certainly make the argument, depending on how things go the next few weeks, that they could fall short, depending on how this Kavanaugh stuff plays out." 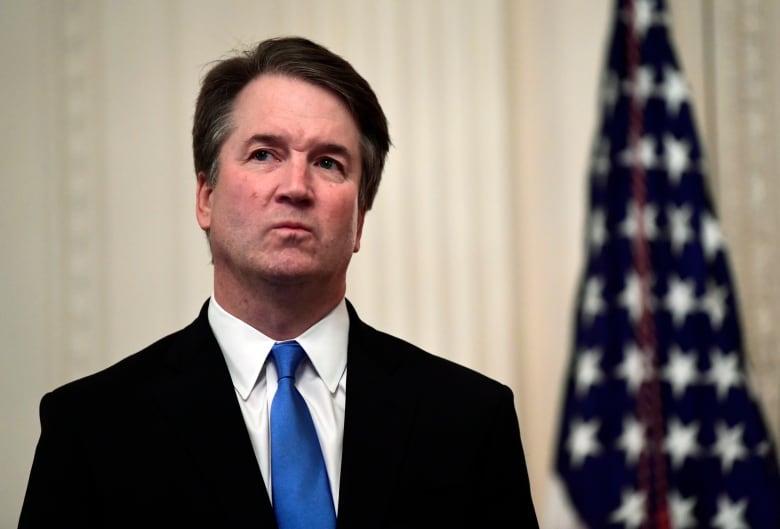 The controversial confirmation of Brett Kavanaugh to the U.S. Supreme Court is likely have an effect on the results of the 2018 U.S. midterms. (Susan Walsh/Associated Press)

Most political observers believe Republicans will be able to retain the Senate.

"You have a lot of Democrats who initially got elected in pretty Republican states like West Virginia and Montana and Indiana and Missouri, North Dakota. Those Democrats are suddenly facing re-election," said Bill Schneider, professor of Policy, Government and International Affairs at George Mason University in Fairfax, Va.

"In a year that … does look good for Democrats, will it be good enough for them to keep their seats?"

The Republicans enjoy a small two-seat advantage in the Senate, meaning the Democrats have to pick up an extra two at least to win. Thirty-five seats are up for grabs, nine of them Republican.

"The thing to keep in mind is there are a lot more vulnerable Democratic senators up this year, about eight of them, and only about two or three vulnerable Republican senators," Schneider said.

It's a political contest that has garnered much attention, given its relative closeness. Democrats are salivating at the possibility that a political giant like Cruz, a former presidential nominee candidate, could be slayed​ by congressman Beto O'Rourke.

His underdog victory would also place O'Rourke in the national spotlight, and he could very likely be on a national ticket for 2020, said Schneider.

"He has a lot of personal appeal. He's a very active candidate, and Ted Cruz is really not," Schneider said.

His appeal stems in part from his brutal campaign schedule, traversing across the state to visit all of its 254 counties.

And his down-to-earth charisma and refusal to take money from political action committees has translated to more than 800,000 donors and massive amounts of fundraising. On Friday, his campaign announced it had raised $ 38.1 million US, a record in a Senate race and more than triple the amount Cruz took in during the same period.

"The energy there is real, there's no question," said Bevan. "[O'Rourke is] getting big crowds. People are excited about him and he has certainly got tons and tons of [fundraising] money."

Yet, so far, that hasn't translated into winning polling numbers. Polls consistently show Cruz leading O'Rourke, who received 500,000 fewer votes than Cruz in their respective primaries.

Historically, Texas has one of the lowest voter turnouts for midterm elections in the country. O'Rourke's only realistic shot, Schneider says, is to tap into those typical non-voters and convince them to come to the polls.

"When you get down to it, there are just so many more Republicans still in Texas that he would have to ride a huge, huge wave to beat Ted Cruz there," said Bevan. "I'm skeptical." 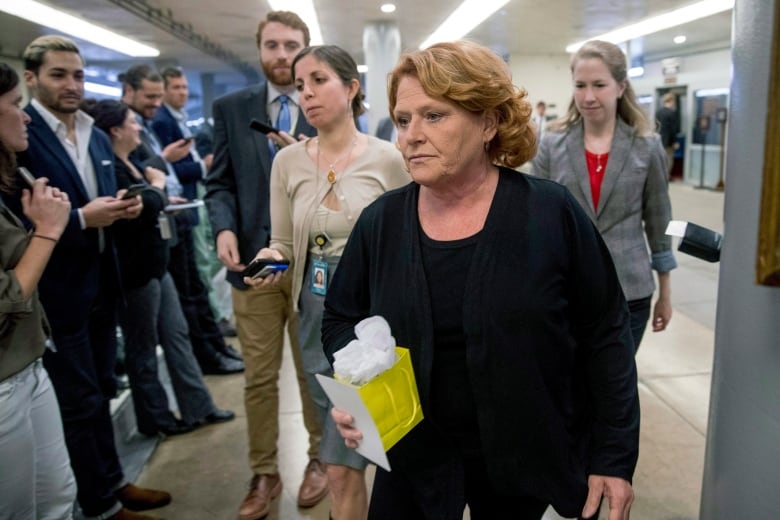 North Dakota Democratic Sen. Heidi Heitkamp is a main target of the GOP to unseat in the midterms. (Andrew Harnik/Associated Press)

Heitkamp's defeat has been a top priority for Republicans, and she is certainly one of the endangered Democrats this year, fighting to be re-elected in a state that Trump took by 36 points.

In such partisan times, the popular senator has been able to forge a working relationship with Trump, who had considered her for his cabinet after his election. She has supported some of his initiatives, including a banking deregulation bill.

Heitkamp was also one of three Democrats who supported Trump's U.S. Supreme Court choice of Neil Gorsuch. But her poll numbers have been sinking and she may have hurt her chances by voting against Kavanaugh. 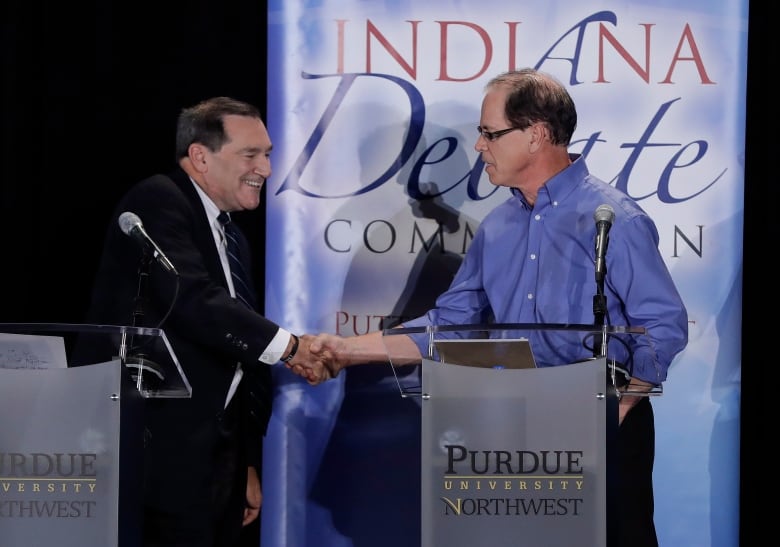 One of the top targets of the Republicans, Donnelly was viewed by some as the "accidental senator," winning in 2012 against Republican Richard Mourdock, who had suggested rape was "something that God intended to happen."

Braun, a former Republican state representative (and former Democrat), is fighting Donnelly in a state that Trump carried by nearly 20 points. That factor may have led Braun to make Kavanaugh an issue at a recent debate, criticizing the incumbent for refusing to support the judge.

"That's a race to watch, because if Democrats cannot hold Indiana, their chance of taking back the Senate is almost non-existent," said Bevan. "In fact, probably makes it look more likely that Republicans would expand their majority in the Senate." 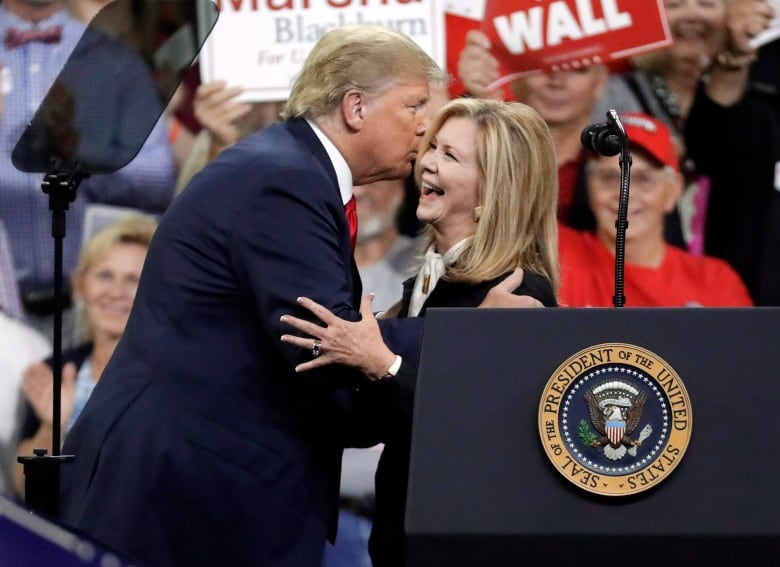 With the retirement of Senator Bob Corker, this reliable Republican seat has been left up for grabs. There has not been a Democrat from the state in the Senate since former vice-president Al Gore back in 1990.

The state elected Trump by 26 points, yet the Senate race is very tight, and the congresswoman is in for a battle. She's up against Democrat Phil Bredesen, the popular former governor who has secured at least one key endorsement: Taylor Swift. The pop singer recently said she'd be voting in Tennessee, but supporting Bredesen, as she opposes Blackburn's voting record on LGBT and women's issues. 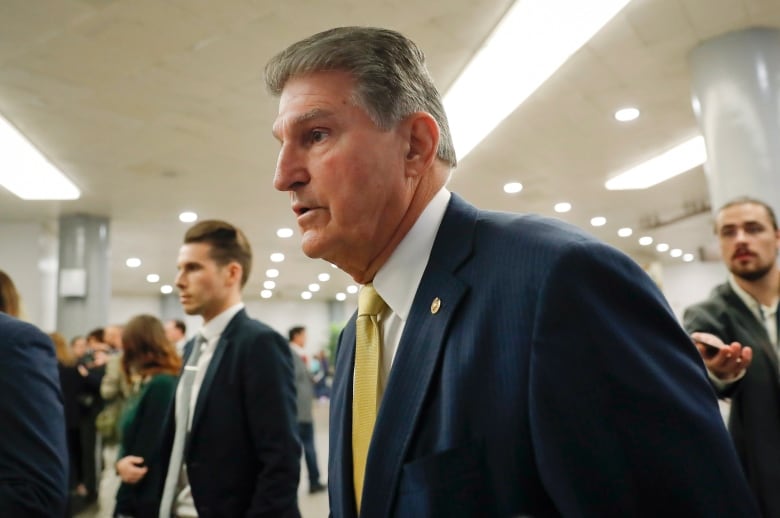 Sen. Joe Manchin is a centrist Democrat who has mused that he would consider backing a second-term Trump presidency in 2020. (Pablo Martinez Monsivais/Associated Press)

It's a tight race in West Virginia, a Republican state Trump won by more than 40 points, his largest vote share in the whole country.

Manchin is a centrist Democrat who recently told Politico that he supports Trump "sometimes more than other Republican senators." He has also mused about the unthinkable for a Democrat: backing a second-term Trump presidency in 2020.

He was the only Democrat to support Kavanaugh, having previously endorsed Gorsuch, yet he remains in a tough battle with Morrisey.

"[Manchin] actually may be able to survive because of his vote on the Supreme Court," Schneider said. 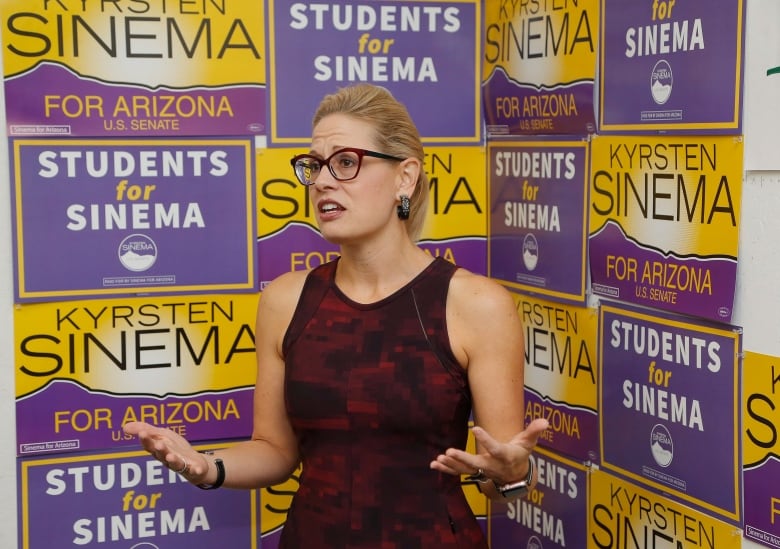 History will be made in Arizona, whoever ends up winning the seat, which is being vacated by GOP Sen. Jeff Flake. It will be the first time a woman has represented the state in the Senate.

Although a traditional red state, demographic shifts have seen Arizona turn purple, giving Sinema a good chance at winning. She is part of the so-called Blue Dog Coalition: Democrats who see themselves as more centrist and conservative. McSally, formerly a vocal critic of Trump, has edged right and since aligned herself with the president. 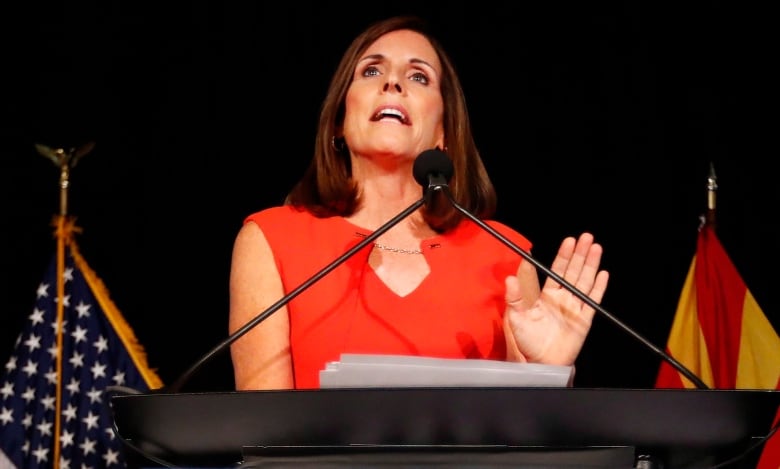 Rep. Martha McSally, formerly a vocal critic of Trump, has since aligned herself with the president. (Matt York/Associated Press)

Both women are trailblazers. McSally is a former combat veteran and was the first female fighter pilot to fly in combat for the U.S. Air Force. Sinema was the first openly bisexual member of Congress. 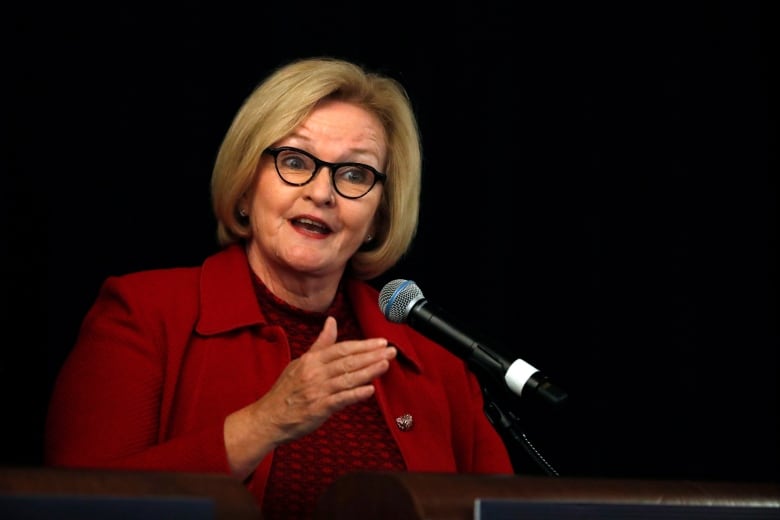 McCaskill had some help in her 2012 re-election bid in this traditional red state, when her then-opponent, Republican Todd Aiken, infamously stated that "if it's a legitimate rape, the female body has ways to shut it down."

Now, she's up against the Ivy League-educated Josh Hawley, the state's attorney general. Trump carried this state by 19 points, and according to U.S. political data website FiveThirtyEight, McCaskill has supported Trump's initiatives about 45 per cent of the time. 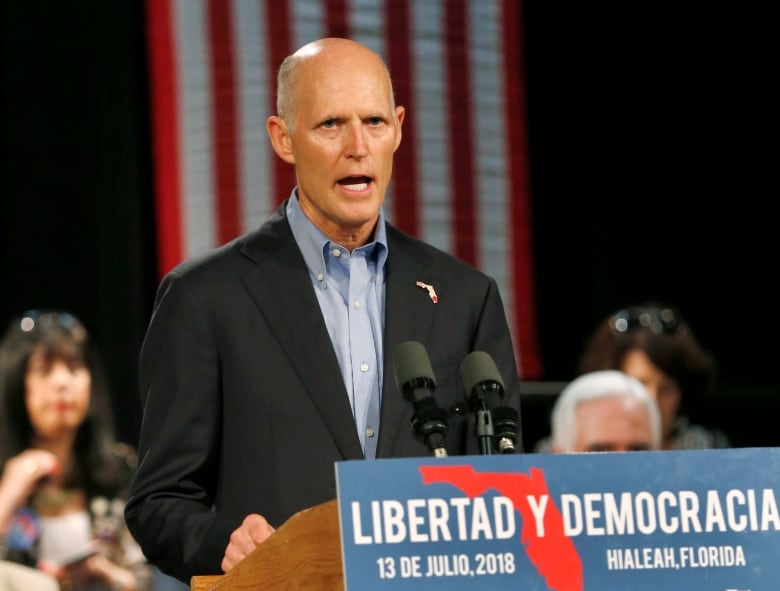 Nelson is considered the last-remaining southern Democratic senator outside of Virginia, and he's the only Democrat elected statewide in Florida.

He's up against Scott, the popular current governor. That makes it a difficult seat for Nelson to hold on to, and one of the most endangered of the Democratic Senate seats, said Schneider. 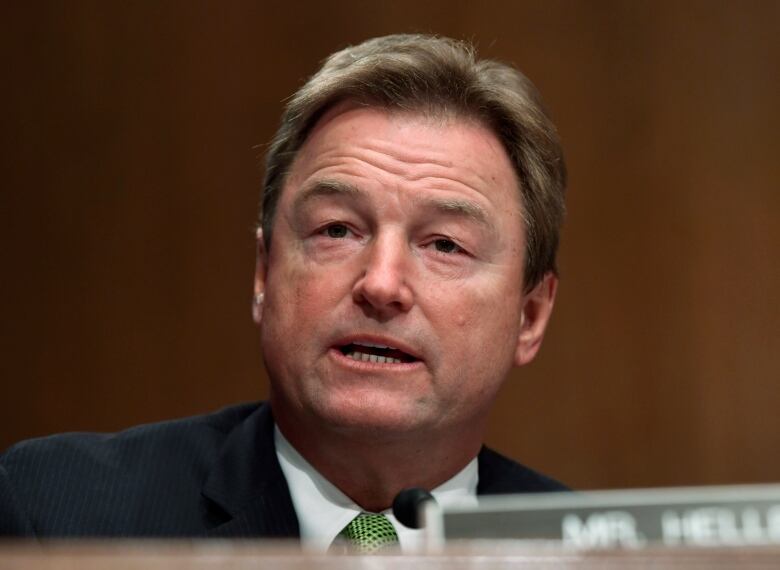 Nevada Sen. Dean Heller is one of the most vulnerable GOP senators. (Susan Walsh/Associated Press)

Democrats have high hopes of unseating Heller, one of the most vulnerable of Republican senators up for re-election, and the only one in a state that was carried by Hillary Clinton. 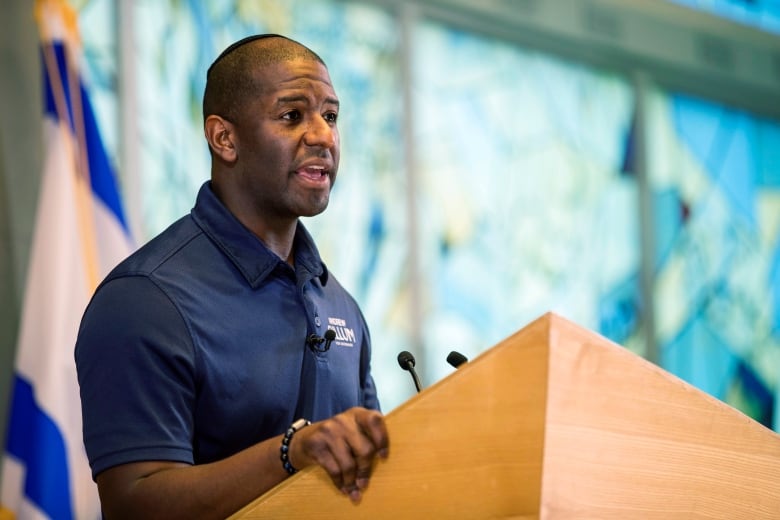 Two close races to keep an eye on are the open governorship races in Florida and Georgia, which both feature black Democratic candidates — A​ndrew Gillum and Stacey Abrams.

Gillum pulled off a shocking victory in the Florida Democratic gubernatorial primary. Meanwhile, a win for Abrams in November would make her America's first black female governor. 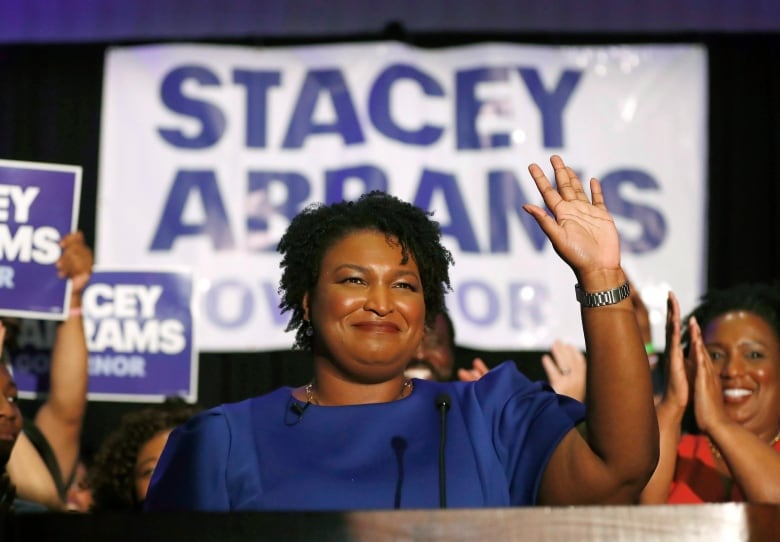 If she wins in November, Georgia's Stacey Abrams would become the first black female governor in the U.S. (John Bazemore/ Associated Press)