The 21-year-old reality star took to Twitter on Wednesday to share her excitement about all the delicious food she’s about to consume on Thanksgiving with her family.

“Can’t wait to eat my body weight in Thanksgiving food tomorrow,” she joked.

Jenner followed up the tweet with two more serious messages, thanking her fans for their support and revealing a bit more insight on how she’ll be spending the holiday.

“But on that note I feel very thankful I was able to provide Thanksgiving meals this year to people in need of one. It’s important we spread the love,” she wrote. “Thankful for you guys.”

but on that note i feel very thankful i was able to provide thanksgiving meals this year to people in need of one. it’s important we spread the love ♥️

thankful for you guys ✨

And Jenner certainly has a lot to be thankful for this year! The brunette beauty and her boyfriend, Travis Scott, welcomed their first child, baby girl Stormi, on Feb. 1. Since then, the two haven’t been able to stop gushing over their little bundle of joy.

“Ugh i love you so much,” Jenner captioned an Instagram pic of Stormi earlier this week. “A living breathing piece of my heart ♥️.”

Hear more on their precious family in the video below.

A man appearing to wear Jamal Khashoggi's clothes left the Saudi Consulate in Istanbul after the journalist was killed there, according to surveillance video, while a member of Saudi Crown Prince Mohammed bin Salman's entourage reportedly made four calls to the prince's office around the same time.

The reports by CNN and a pro-government Turkish newspaper came just a day before Prince Mohammed's high-profile investment summit is to begin in Riyadh, and Turkish President Recep Tayyip Erdogan has promised that details of Khashoggi's killing "will be revealed in all its nakedness." 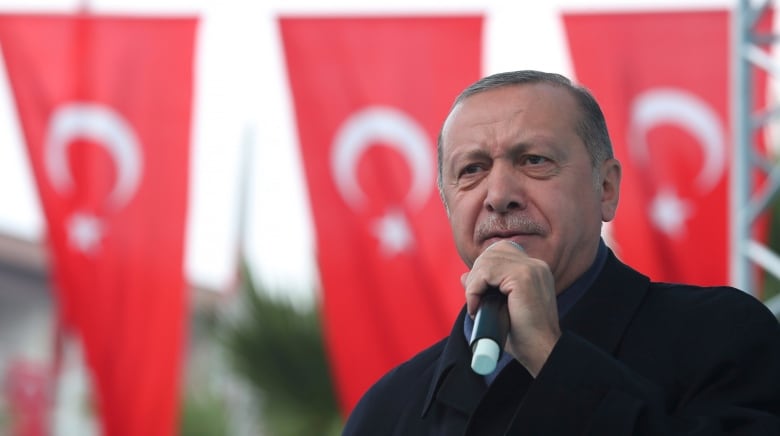 Turkish President Recep Tayyip Erdogan, delivers a speech at supporters in Istanbul on Sunday. Erdogan says he will announce details of the Turkish investigation into the death of Khashoggi on Tuesday. (Presidential Press Service via Associated Press)

That yet again adds to the pressure Saudi Arabia faces over the slaying of the Washington Post columnist and U.S. permanent resident. The kingdom's claim on Saturday that Khashoggi died in a "fistfight" met international skepticism and allegations of a coverup to absolve the 33-year-old crown prince of direct responsibility.

Turkish media reports and officials maintain that a 15-member Saudi team flew to Istanbul on Oct. 2, knowing Khashoggi would arrive for a document he needed to get married. Once he was inside the diplomatic mission, the Saudis accosted Khashoggi, cut off his fingers, and killed and dismembered the 59-year-old writer.

CNN aired surveillance footage on Monday showing the man in Khashoggi's dress shirt, suit jacket and pants. It cited a Turkish official as describing the man as a "body double" and a member of the Saudi team sent to Istanbul to target the writer. The man is seen in the footage walking out of the consulate via its back exit with an accomplice, then taking a taxi to Istanbul's famed Sultan Ahmed Mosque, where he went into a public bathroom, changed back out of the clothes and left.

Surveillance video shows a man appearing to wear Jamal Khashoggi's clothes leaving the Saudi Consulate in Istanbul after the journalist was killed there on Oct. 2. 0:26

The state-run broadcaster TRT later also reported that a man who entered the consulate building was seen leaving the building in Khashoggi's clothes.

In the days after Khashoggi vanished, Saudi officials initially said that he had left the consulate, implying premeditation on the part of the Saudi team.

"After Turkish authorities and the media were allowed to inspect the consulate building in its entirety, the accusations changed to the outrageous claim that he was murdered, in the consulate, during business hours, and with dozens of staff and visitors in the building," Saudi Ambassador to the U.S. Prince Khalid bin Salman, a brother of the crown prince, wrote on Oct. 8. "I don't know who is behind these claims, or their intentions, nor do I care frankly."

Yeni Safak cited no source for the information. However, pro-government newspapers have been leaking information about Khashoggi's killing, apparently with the help of Turkish security forces. Yeni Safak reported last week that Saudi officials cut off Khashoggi's fingers and then decapitated him at the consulate as his fiancée waited outside. 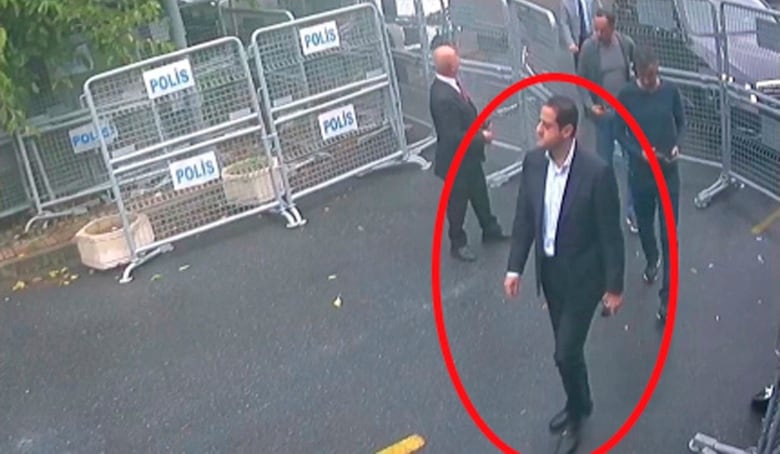 An image made from surveillance camera footage shows a man identified by Turkish officials as Maher Abdulaziz Mutreb walking toward the Saudi Consulate in Istanbul before Khashoggi disappeared on Oct. 2, 2018. The image was published Thursday by the pro-government Turkish newspaper Sabah. (Sabah via Associated Press)

Officials in Saudi Arabia have not answered repeated requests for comment from The Associated Press in recent days, including on Monday. Saudi Arabia so far has not acknowledged or explained Mutreb's presence in Istanbul — nor that a forensics and autopsy expert was also on hand for Khashoggi's arrival at the consulate.

Last week, a leaked photograph apparently taken from surveillance footage showed Mutreb at the consulate, just ahead of Khashoggi's arrival. Mutreb's name also matches that of a first secretary who once served as a diplomat at the Saudi Embassy in London, according to a 2007 list compiled by the British Foreign Office.

Meanwhile, Saudi state media reported that both Prince Mohammed and King Salman made calls to Khashoggi's son, Salah, early on Monday morning. Statements from the agency said both the king and the crown prince expressed their condolences for Khashoggi's death.

A Saudi friend of Khashoggi who was in frequent touch with him before his death, told The Associated Press that Salah Khashoggi had been under a travel ban and barred from leaving the kingdom since last year as a result of his father's criticism of the government. The friend spoke on condition of anonymity for fear of repercussion. The Saudi statements did not acknowledge the ban. 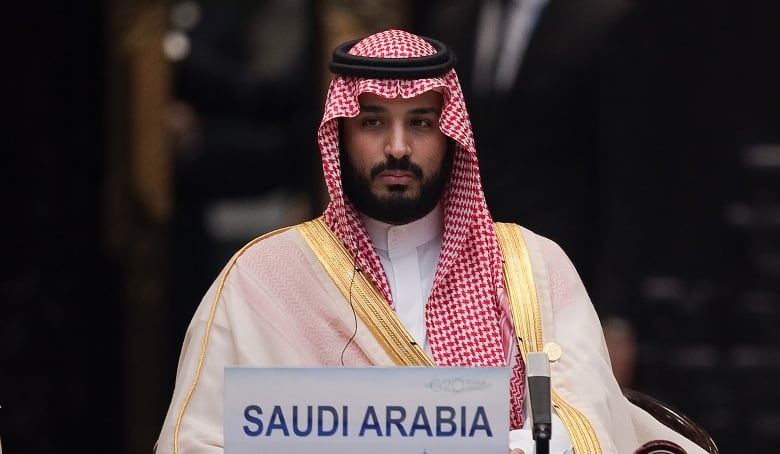 Five Turkish employees of the consulate also gave testimonies to prosecutors on Monday, Turkish media reported. Istanbul's chief prosecutor had summoned 28 more staff members of the Saudi Consulate, including Turkish citizens and foreign nationals, to give testimony. Some Turkish employees reportedly said they were instructed not to go to work around the time that Khashoggi disappeared.

Turkish investigators on Monday also visited an underground car park in Istanbul where authorities had found a vehicle belonging to the Saudi Consulate. News reports say the car was left there two weeks ago. Investigators looking into the disappearance of Saudi journalist Jamal Khashoggi last week searched other consulate vehicles, along with the consulate building and the consul general's residence.

Saudi Foreign Minister Adel al-Jubeir on Sunday told Fox News that Khashoggi's killing was "a rogue operation" and that "we don't know where the body is."

"The individuals who did this did this outside the scope of their authority," he said. "There obviously was a tremendous mistake made and what compounded the mistake was the attempt to try to cover up. That is unacceptable to the government."

However, leading Republicans and Democrats in Congress are saying Saudi Arabia should face punishment over Khashoggi's killing. U.S. President Donald Trump also had talked about possible punishment, but said he didn't want to halt proposed arms sales to Saudi Arabia because, he maintained, it would harm U.S. manufacturers.

Britain, Germany and France issued a joint statement condemning the killing of Khashoggi, saying there is an "urgent need for clarification of exactly what happened."

In a statement Sunday, the governments said attacks on journalists are unacceptable and "of utmost concern to our three nations." They said the "hypotheses" proposed so far in the Saudi investigation need to be backed by facts to be considered credible.

German Chancellor Angela Merkel told reporters in Berlin on Sunday that she supports a freeze on arms exports to Saudi Arabia. German Economy Minister Peter Altmaier on Monday called for a joint European position as Germany "won't at this point approve any further arms exports because we want to know what happened."