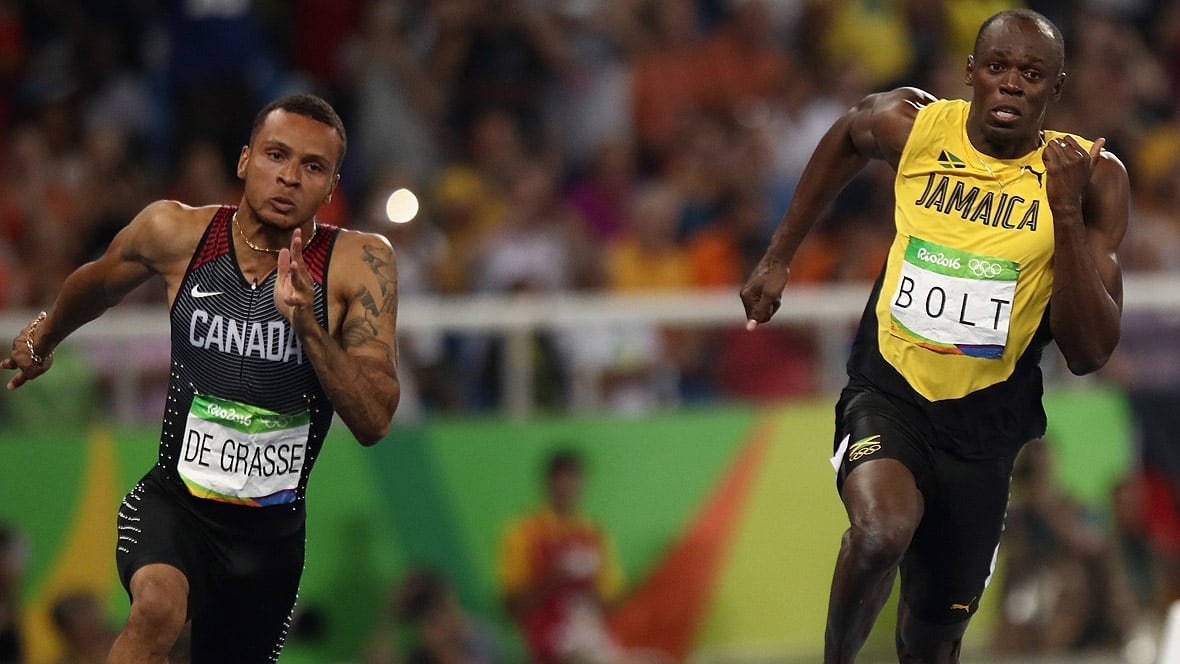 Canadians anxious for a world championships preview pitting an improved Andre De Grasse and world-record holder Usain Bolt in the 100 metres at Monaco on Friday will be disappointed.

De Grasse and Bolt will be at the final Diamond League meet before worlds, which will be live streamed at CBCSports.ca at 2 p.m. ET, but competing in separate events — De Grasse in the 4×100-metre relay and Bolt in the 100 at Louis II Stadium for the first time since 2011.

“We were in the [100] race. We got booted out. That’s all on Bolt,” De Grasse’s coach Stuart McMillan told CBC Sports recently. “Let’s just say he wanted not such an elite field against him.”

Typically in the men’s 100, the elite sprinters will have secure graces, or a protection clause, that allows someone like Bolt to control the field in a race “which is a great thing if you’re afraid you’re going to lose” or unsure how you’re going to perform, explained Kris Mychasiw, managing partner of Montreal-based Sprint Management.

He added that’s why you don’t often see American Justin Gatlin line up with Bolt or De Grasse because the winner’s value rises and the loser’s value plummets.

“Prior to the Monaco event,” said Mychasiw, “Bolt might have had a clause in his contract that said he doesn’t have to race anyone ranked in the top five or top 10 in the world, and that the field would need to be approved by himself and/or his management company.”

“No one wants to see Bolt lose this year and I think Andre, right now, is a major threat to that in Monaco,” said Mychasiw.

De Grasse’s three medals at last summer’s Olympics in Rio de Janeiro — silver behind Bolt in the 200 and bronze behind the Jamaican in the 100 and relay — is the most won by any Canadian sprinter at a single Olympics.

Since then, he has repeatedly expressed a desire to beat Bolt before the 30-year-old retires following the world championships.

“It would mean everything to me. I have been working so hard for it,” said De Grasse. “For me to be able to call myself the fastest man in the world, it would be a blessing. I am definitely looking forward to that day.”

“He’s going to be good. He runs just like me, he’s really slow out of the blocks but when he gets going, he gets going,” Bolt said after the 200 final in Brazil. “I think he can improve his start, make it better than mine because he is shorter so he will get better on his starts.”

Bolt explains his plans for the World Championships pic.twitter.com/IJYygoDzwm

Well, the five-foot-eight De Grasse has indeed improved his acceleration out of the starting blocks this season, according to McMillan. Former Olympic 100 champion-turned CBC Sports analyst Donovan Bailey noted the 23-year-old has also made strides in his speed endurance.

On Sunday, De Grasse finished first and set a meet record of 20.03 seconds in the 200 at Diamond League Rabat in Morocco. That performance came on the heels of his double gold in the 100 and 200 at the Canadian track and field championships earlier this month in Ottawa.

De Grasse raised eyebrows a month ago when he ran a wind-aided 9.69 in the 100 in Stockholm — 9.88 with no wind, according to estimated wind-altitude adjustment calculators — and has prevailed in four consecutive Diamond League races, capturing the 200 in Rome and the 100 in Oslo and Sweden.

“One of the things I liked about the fact he ran 9.69 is that his body was capable of going that fast without injuring anything,” said Bailey of De Grasse.

“One of the things Stuart will do is prepare him to peak in London. That’s where we’re going to see his best [time] this year.”

Bolt last raced on June 11, his final performance in his native Jamaica, where he topped the field in 10.03 before 35,000 at Kingston’s National Stadium. He then wowed the crowd by showing off his dance moves on a night dubbed Salute To A Legend.

According to his manager, Ricky Simms, Bolt will try to add to his 13 world championship medals by running the 100 and 4×100 in London.

The following is a list of upcoming Diamond League meets on CBCSports.ca and the CBC Sports app: