Teammates have called their relationship a "bromance."

Patriots quarterback Tom Brady himself openly uses the word love to describe his bond with Julian Edelman, a receiver he's come to depend on during his career.

As the duo prepares to play in a fourth Super Bowl together, each says the connection might be tighter ever — both on and off the field.

In Edelman's case, it's a little brother who has established himself as one of the best slot receivers in Patriots history.

He missed the entire 2017 season with a torn ACL and the first four games of this season for violating the league's performance enhancers policy. But the 32-year-old helped Brady steady an offence that struggled early this season and had to adjust following the suspension of Josh Gordon heading into the final two games.

Edelman ended the regular season with a team-high 850 receiving yards and was second on the team with 74 receptions and six touchdowns. His production has continued through New England's first two playoffs games, with Edelman hauling in 16 catches for a team-high 247 yards. 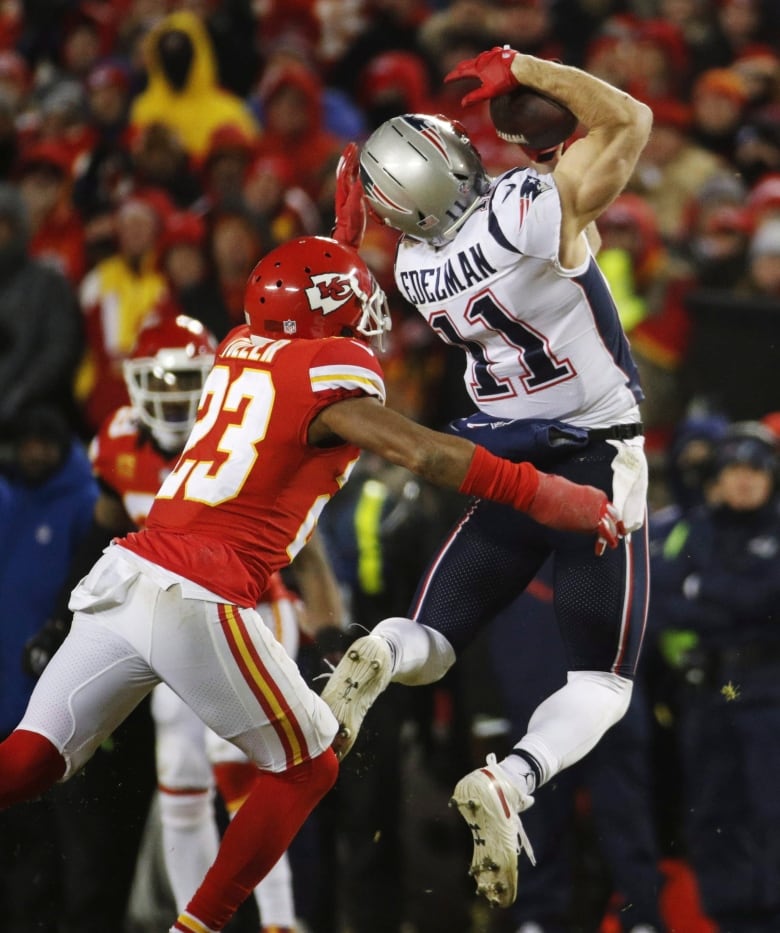 Julian Edelman (11) made a number of big receptions in the fourth quarter of New England's win over Kansas City in the AFC championship. (Charlie Riedel/Associated Press)

Heading into the matchup with the Rams, his 1,271 post-season receiving yards are the most in Patriots history. There are also just two receivers in NFL post-season history with over 100 catches: Jerry Rice with 151 and Edelman with 105.

It not unlike the determination used to describe Brady, who at age 41 continues to prove his skeptics wrong.

"He's a really good football player, the best," Edelman said. "He goes out and he consistently proves it. He's one of our leaders and he's a leader for a reason."

Though they first met as teammates in New England when Edelman was drafted by the Patriots a decade ago, he and Brady took remarkably similar paths to get to the NFL.

Both natives of California, each of them grew up idolizing the San Francisco 49ers' dynasty led by Joe Montana and Rice.

Brady played his college ball at Michigan, with Edelman eventually choosing Kent State across the border in Ohio.

Their stories continued to mirror each other when it came time for the NFL draft.

Chasing the NFL was a leap of faith for Edelman, who nearly signed a contract with the CFL's British Columbia Lions to play quarterback.

"I sat down with my father and basically, he's like 'Let's do it,"' Edelman recalled. "I just had an eerie feeling in my stomach and I told him I didn't grow up wanting to play in the CFL. I went and tried to play in the NFL. That was my decision. Everything happens for a reason."

Edelman was already a fan of Brady's when he arrived as a rookie, but he said he almost instantly recognized an underdog spirit in his new quarterback as well. As their relationship has evolved, they say they've developed their own sort of silent language on the field, and have unique ways to hype up each other.

An example was during the AFC championship game when video captured Edelman in Brady's face yelling , "You're too old!" as Brady sat on the bench after throwing a first-half touchdown pass.

"You've got two fiery guys. I think it's fun to watch," Patriots cornerback Jason McCourty said. "You see two guys that are the ultimate competitor. How hard they both compete in practice, you see the bromance at times, you see the fiery looks they give each other sometimes if someone messes up. Just that look of not disappointment, of just like 'get it together.' I think it's almost like brothers."

Brady said he continues to be amazed by Edelman.

"Look at his stature. He wasn't built like Megatron (Calvin Johnson). He's just built the way he was built and I think he's just worked so hard over the years to learn how to play receiver," Brady said. "He's just done an incredible job."