What this Brooklyn bar probably didn’t need was the iffy gun-crime backstory, not to mention the apparent allusions to cheap malt liquor.

Yet in the month since it opened, those gimmicks have turned Canadian expat Becca Brennan’s restaurant Summerhill into Brooklyn’s hottest new lightning rod for racial anguish. Residents of Crown Heights accuse Brennan, who is white, of fetishizing the area’s violent history by boasting about the business’s “bullet hole-ridden” decor. 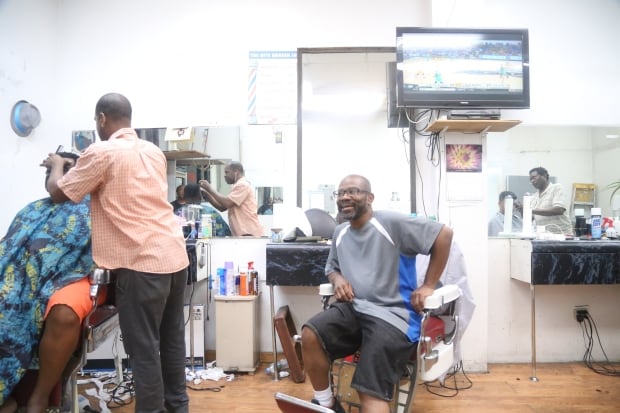 ‘No joke,’ says mother who lost a son

But Robin Lyde, whose son Benny was murdered in a 2006 shooting, isn’t amused.

“It’s no joke,” Lyde said at a hair-braiding salon across the street from Summerhill in this diverse neighbourhood. “I lost a son in this community, so I know too well. Glorifying bullets is insane. We’re not promoting that we want to live ‘ghetto fabulous.'”

A local resident inspects the “bullet hole wall” for authenticity during a protest at Summerhill in Brooklyn, NY. @EaterNYpic.twitter.com/WePjR5FZV2

Crown Heights is historically home to a large West Indian, Caribbean and Hasidic Jewish population. Longtime residents complain that wealthier newcomers over the last 15 years have brought in new money, priced out black-owned businesses and pushed up rents.

Onyi Atanmo was sickened when she read about the marketing for the new business, which was billed as a “boozy sandwich shop” and named after the tony Toronto neighbourhood where Brennan, a former corporate tax attorney, grew up. 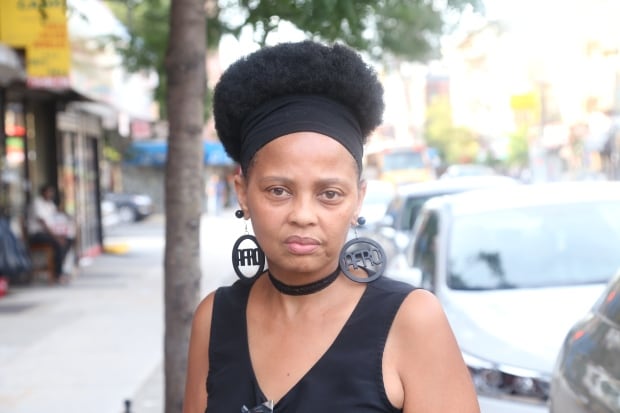 She believes Brennan was making light of the community’s struggles by selling rosé wine in 40-ounce bottles wrapped in brown paper bags — packaging reminiscent of the cheap but potent malt liquor that has helped ravage some African-American families.

“It’s just disgusting,” Atanmo said of the apparent attempt at a high-low aesthetic. “To say this is a great spot to take pictures, like it’s a trendy spot and look at these bullet holes and you can drink your rosé in a 40-ounce bottle and be cool, there’s nothing trendy about this.”

The controversy literally hits home for Roger Myers, a 46-year tenant who lives a few floors above Brennan’s bar.

“We’ve had shootouts. We’ve had violence. We’ve had so-called gang activity,” he said, while chatting with friends at a black-owned barbershop. “Then you open up a business and then say, ‘Oh, by the way, we’re going to serve wine in 40-ounce bottles? Like the same thing that’s bringing your community down, and as a joke? What are you thinking?”

Hyping her business in an email blast to New York blogs, Brennan bragged about preserving a pock-marked wall as part of Summerhill’s “Instagrammable” lure. The previous location, she mused, was a rumoured backroom gun shop.

“Yes, that bullet hole-ridden wall was originally there and, yes, we’re keeping it,” her press release read.

Her claim was debunked. Longtime residents said delis have long operated at the property, not a gun shop. The blog Gothamist investigated and concluded Brennan’s alleged “bullet holes” were likely cosmetic damage from construction. 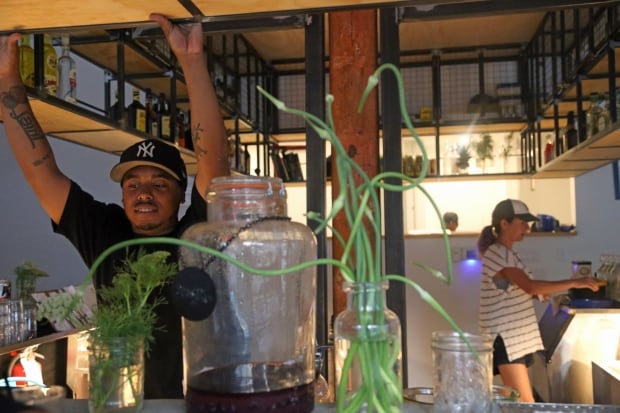 Critics of the Summerhill bar say it encapsulates why gentrification in the neighbourhood is so troubling. (Matt Kwong/CBC)

Brennan, who wouldn’t answer questions from CBC, admits she made a mistake. But her words have failed to cool tensions.

Her apology in Gothamist — “I truly never meant it in that way, but I recognize that it was insensitive” — was dismissed as a rote expression of regret lacking specific plans for redress.

Even so, she has supporters.

Zeke Finn and Bentzy Plotkin, who felt the matter was overblown,  discussed having a “counter-protest drink” at Summerhill. Both have roots in the historically Hasidic neighbourhood.

Brennan’s marketing was distasteful, Plotkin said. “But I’ve met her and I think it was just, like, people say and do things and I don’t think it was malicious.” 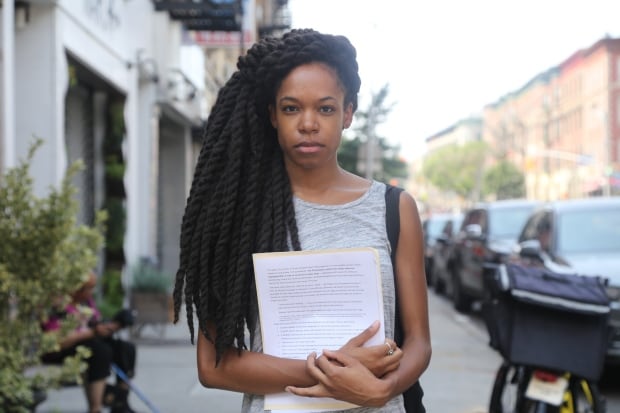 Crown Heights resident Justine Stephens is calling for a boycott of the new bar and restaurant. (Matt Kwong/CBC)

Justine Stephens, who is black and says she cried when she first read about Summerhill’s advertising tactics, is calling for a boycott.

She co-organized a weekend “public forum” outside the bar to protest alleged racial insensitivity.

“It sounds controlled, the way she’s speaking to the media. Not like she wants to give a genuine apology,” Stephens said.

She wants Brennan to patch up the wall, start representing itself at Crown Heights Tenant Union meetings to engage more with the community and submit a “detailed business plan” to hire Crown Heights residents “and people of colour as employees at living wages or higher.”

Over the weekend, up to 200 residents crammed the sidewalk outside Summerhill for the public forum. 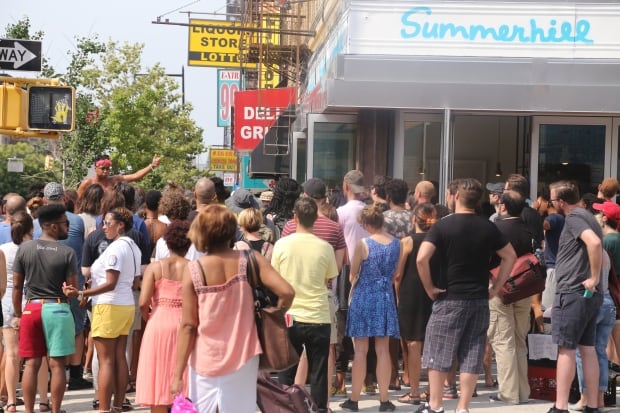 At a public forum on the weekend, as many as 200 people protested outside the bar, chanting, “Bye bye Becky!” (Matt Kwong/CBC)

One of the forum’s Latina co-organizers stood on a step-ladder to address the mostly black audience.

Tracey Reid, a former Torontonian who runs the Rastafarian shop across the street, told the crowd about seeing irony in the controversial bar sharing a name with one of Canada’s richest neighbourhoods. 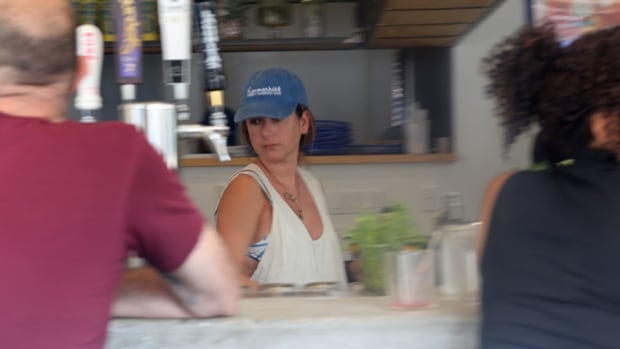 Becca Brennan is a former Torontonian whose business has met a racial backlash from the Brooklyn, N.Y., community. (Matt Kwong/CBC)

Using gun violence for profits, she added, is “distasteful to the human experience.”

From inside Summerhill, Brennan could be seen serving customers and pouring drinks, occasionally watching the forum from the open patio. Regulars and friends, including some black patrons, sat and looked on with Brennan in solidarity.

More work to do

Asked for a comment, Brennan only told CBC News: “I’ll be working.”

She did not take up invitations to address the crowd, but a team of public relations specialists handed out written apologies to media reiterating her affection for Crown Heights. 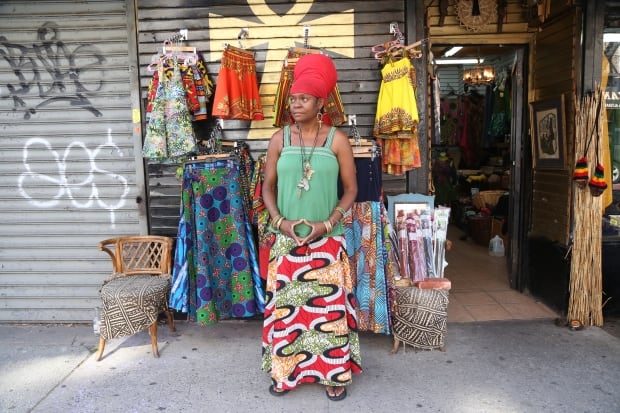 Reid runs the Rastafarian shop across the street from Summerhill. (Matt Kwong/CBC)

“I have more work to do to continue healing relationship with my neighbours,” her statement reads in part.

One way to do that, Crown Heights locals say, would be for her to ingratiate herself with neighbourhood businesses and get involved in community activism — something Brennan promised to do.

Following Saturday’s public forum, she reached out to Stephens via a PR specialist.

“Summerhill listened and would like to the opportunity to sit with you to have a conversation and open a dialogue,” the email read.