Eugenie Bouchard said she was lacking confidence after being bounced from the Rogers Cup in the first round on Tuesday.

And though she offered up a fairly simple fix to that problem — “win matches” — that’s been easier said than done for Canada’s top women’s singles player lately. Her latest setback, a straight-sets loss to 21-year-old qualifier Donna Vekic of Croatia, helped underscore that.

Bouchard fell 6-3, 6-4 in the afternoon tilt on the Aviva Centre’s centre court. Vekic, playing in her main draw debut at the Rogers Cup, broke the Westmount, Que., native six times and won 17-of-27 first-serve points.

“I think I just made too many unforced errors, you know. I’m obviously a bit low in confidence right now,” Bouchard said. “It’s tough to get through tough matches when you’re in a moment like that.”

Bouchard, who has dropped rapidly down the rankings from a career-high No. 5 in 2014 to her current spot at No. 70, started Tuesday’s match on the wrong foot. She was broken in the first game after a lengthy back-and-forth, then broken again to go down 3-0.

Bouchard was 2 for 3 on break points during the first set but Vekic broke the Canadian four times, including the deciding game — a 10-minute long affair that saw the opponents hit deuce six times. She had 19 unforced errors to Vekic’s 10.

The second set started better for Bouchard, who broke Vekic for a 2-1 lead, but she lost her next serve and responded by bouncing her racket off the ground in frustration. Each held serve over the next five games before Bouchard hit the net down 40-30 to give Vekic the match at 6-4.

Teen Andreescu loses in 1st round

The 17-year-old Andreescu, ranked 144th in the world, was the last remaining Canadian in the women’s singles draw. Montreal’s Francoise Abanda’s was ousted Monday night.

“I think I was very well prepared, I had tactics on how to play her but everyone has their days and today was her day,” Andreescu said. “Congrats to her.”

Bouchard said before Andreescu’s match that she would welcome a successful run from the teen.

“I think she’s a good player,” she said. “I practised with her a little bit last week in D.C., and I think she had a good run last week. So, you know, someone else can carry the burden of Canada.” 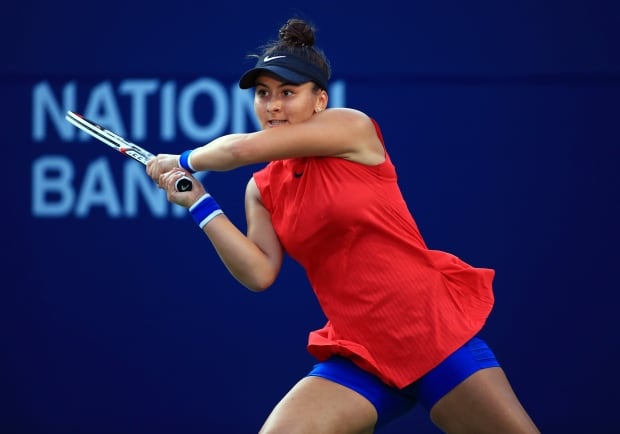 Canada’s Bianca Andreescu makes a return in her loss to Timea Babos Tuesday at the Rogers Cup. (Vaughn Ridley/Getty Images)

Bouchard rose up the rankings when she reached the Wimbledon final in 2014 after two straight Grand Slam semifinal appearances.

Asked if she’d prefer that fans and media ease up on her, noting she’s still young enough to turn her career around, Bouchard replied “yes and no.”

“I mean, I guess I’m relatively young, but I feel old in a way,” the 23-year-old said. “You know, I’ve been on tour a bunch of years already. And I think it’s important to feel the pressure of time a little bit, to get into action and not just relax and let years go by. That would be the worst thing I could do.

“But if the media doesn’t put pressure on me, I mean, that would be nice.”

Vekic won her spot in the main draw via a two-round qualifying tournament over the weekend. Bouchard was a wild-card entry in her seventh main draw appearance at the Canadian event.

Her best showing at a Rogers Cup came last year in Montreal, when she lost to Slovakia’s Kristina Kucova in the third round.

“It’s something I thought about doing a little more to get more match play,” Bouchard said of her reasons for playing doubles. “To me, even if it’s doubles, and I generally am more of a singles player, it’s still pressure of a match and better than practice and more fun than practice.”

Bouchard said she would welcome a successful run from Andreescu.

“I think she’s a good player,” she said. “I practised with her a little bit last week in D.C., and I think she had a good run last week. So, you know, someone else can carry the burden of Canada.” 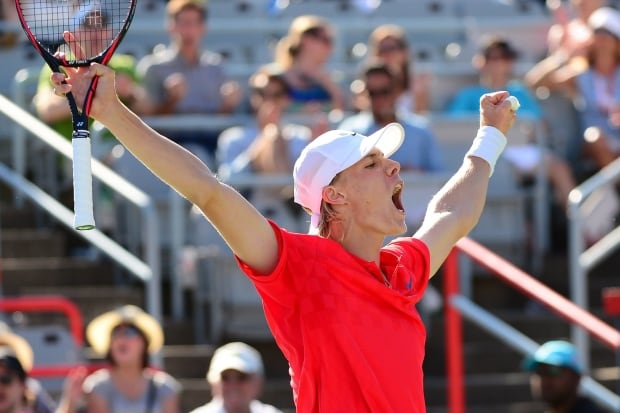 Denis Shapovalov celebrates after winning a point in his victory over Rogerio Dutra Silva at the Rogers Cup men’s event in Montreal on Tuesday. (Paul Chiasson/Canadian Press)

Canadian Denis Shapovalov admits the epic tiebreak that propelled him into the second round of the Rogers Cup is still “a little bit of a blur.”

The 143rd-ranked Shapovalov survived four match points in a second-set tiebreak on his way to a 4-6, 7-6(8), 6-4 victory over the 64th-ranked Rogerio Dutra Silva of Brazil in the opening round on Tuesday.

“I don’t remember all of them, honestly,” said Shapovalov, who was granted a wild-card spot in the tournament. “I wasn’t holding back. I just told myself, ‘He’s got to win it from me. I’m not going to give it to him.’

“I think I did a good job to stay tough out there.”

After dropping the opening set, Shapovalov’s margin for error was slim.

The Richmond Hill, Ont., native’s comeback looked unlikely when he quickly fell behind 3-0 in the second-set tiebreak. He fired back-to-back aces to give himself a fighting chance.

With the Canadian now in front 9-8, Dutra Silva double faulted to give Shapovalov the second-set victory.

“I’m sure he felt the crowd getting on him,” said Shapovalov. “After every match point I saved, they went pretty crazy. It adds to the nerve for the other guy. They were so alive, so intense.”

In the third set, Shapovalov fired four aces. He broke Dutra Silva to take a 4-3 lead in the set and never looked back.

On triple match point, Shapovalov fired a serve that handcuffed Dutra Silva. The 18-year-old dropped his racket and threw his arms in the air as the centre court crowd at Uniprix Stadium erupted in cheers.

“Obviously after the breaker, I felt the momentum was shifting towards my way,” said Shapovalov. “I thought if I could get an early break, it would help me. I think I played really good tennis in the third set.”

It’s the second straight year that Shapovalov has advanced into the tournament’s second round after beating Nick Kyrgios during his opening match in 2016 in Toronto.

The win is Shapovalov’s first on hard court this year (1-3). It’s also just his second victory on the ATP world tour in 2017.

He’ll now face Juan Martin del Potro of Argentina, ranked No. 31, in the second round.

“He’s one of my idols,” said Shapovalov of del Potro. “Growing up I saw him win the U.S. Open. So it’s going to be an extremely tough match. But I live for these moments. I live to be in these matches. I think it’s going to be a great battle.”

Chung, ranked No. 56 in the world, took advantage of several mistakes made by the 28th-ranked Lopez, including eight double faults, to win the two hour 16 minute match.

The opening match on centre court at Uniprix Stadium was supposed to feature 10th-ranked Tomas Berdych but he pulled out with a rib injury. Berdych’s withdrawal ended a streak of 12 consecutive appearances in Canada for the Czech player.

In the final match of the day, third-seeded Dominic Thiem was upset in the second round by Diego Schwartzman. Schwartzman took it 6-4. 6-7, 7-5 in a match that needed two hours 55 minutes. Thiem is the highest-ranked player at the tournament to be eliminated so far.

Borna Coric easily defeated Mikhail Youzhny 6-2, 6-4 to set up a meeting with Rafael Nadal in the second round.

Milos Raonic from Thornhill, Ont., was initially scheduled to play his opening match on Tuesday but a minor injury forced him to postpone it to Wednesday. He faces France’s Adrian Mannarino.