U.S. President Donald Trump delivered a foreboding message Thursday night, telling reporters as he posed for photos with his senior military leaders that this might be “the calm before the storm.”

White House reporters were summoned suddenly and told the president had decided he wanted the press to document a dinner he was holding with the military leaders and their wives.

Reporters were led hastily to the grand State Dining Room, where they walked into a scene of the president, his highest-ranking military aides and their wives posing for a group photo. The cameras clicked and they smiled. A joke was made about someone’s face being tired. Live classical music played.

Then, Trump gestured to the reporters in the room. 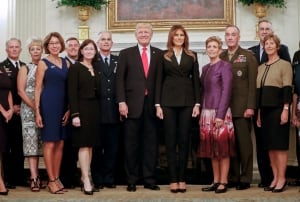 President Donald Trump and his wife Melania Trump, centre, pose for a group photo with senior military leaders and spouses in the State Dining Room of the White House in Thursday. (Pablo Martinez Monsivais/Associated Press)

“You’ll find out,” the president said.

He also praised those assembled for the photo, saying: “We have the world’s great military people in this room, I will tell you that.”

Earlier in the evening, the president had lauded the group, including his defence secretary and chairman of the joint chiefs of staff, and said they would be discussing the most pressing military issues facing the country, including North Korea and Iran.

Trump said “tremendous progress” had been made with respect to the Islamic State in Iraq and Syria, adding, “I guess the media’s going to be finding out about that over the next short period of time.”

Military options ‘at a much faster pace’

He also denounced Iran, saying the country should not be allowed to obtain nuclear weapons, and offered another stark warning to North Korea’s Kim Jong-un.

“We cannot allow this dictatorship to threaten our nation or allies with unimaginable loss of life,” he said, vowing to “do what we must do to prevent that from happening and it will be done, if necessary. Believe me.”

He also said that, moving forward, he expects those in the room to provide him with “a broad range of military options, when needed, at a much faster pace.”

A statement released by the office of White House press secretary Sarah Huckabee Sanders offered no hint of any specific directives, saying the gathering had been a productive one in which the president relayed his national security priorities and reviewed progress with his military advisers towards “pursuing peace through strength and promoting positive American influence abroad.”

The administration, in its first nine months, has endured some fraught Fridays. Trump signed an executive order at the end of the workweek on Jan. 27 barring entry to the country for 90 days for many citizens of several countries. The first so-called travel ban led to a weekend of chaos at many U.S. airports.

This week has brought another published report of discord within the administration, involving Rex Tillerson, but the Secretary of State strongly confirmed his commitment to the president’s agenda and denounced the report.

As well, at an Alabama rally for a senatorial candiate on the evening of Friday Sept. 23, Trump went off a tangent involving NFL players kneeling during the playing of the national anthem, referring to any player that chose that protest as a “son of a bitch.”

It precipitated a weekend of Trump tweets and a counter-response from the NFL, all while U.S. territory Puerto Rico was dealing with the devastating effects of Hurricane Maria, events Trump didn’t publicly comment on until early the following week.

The Trump administration did announce on Friday a long-expected revision to Obama-era rules which would allow more employers to opt out of providing no-cost birth control to women for religious and moral reasons.

The rules require most companies to provide birth control as preventive care for women, at no additional cost. Under the Affordable Care Act, preventive services are supposed to be free of charge to employees and their dependents.