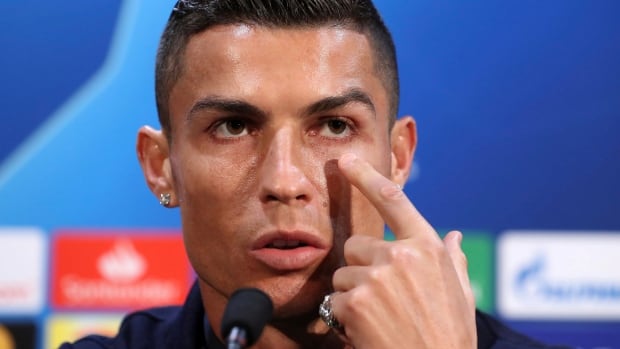 Ronaldo is being asked by police to provide a DNA sample in an investigation of the allegation by Kathryn Mayorga, a former model and schoolteacher, that he raped her in his Las Vegas hotel penthouse in 2009 and paid her to keep quiet.

"It's a private matter so I can only talk about soccer. So I'll respond to how I've seen Ronaldo. He's very calm. He has trained very well and rested like everyone else — which was needed after four intense months," Allegri said at a pre-match news conference. "Now he needs to prepare well for the second half and most important part of the season.

"I see Cristiano very serene and calm and that's what I'm basing this on," Allegri said when asked if the alleged rape case might affect Ronaldo's performance in the long run. "For the rest of it, it's not my job to respond because they are private matters and it's only right that I don't respond."

Allegri added that Ronaldo will play in an Italian Cup match at Bologna on Saturday.

"He'll play tomorrow. We'll see about when and how," Allegri said.

Ronaldo's lawyer, Peter S. Christiansen, downplayed the DNA development, denied the rape allegation and called evidence collection common in any investigation. He added Thursday that "what occurred in Las Vegas in 2009 was consensual in nature so it is not surprising that DNA would be present, nor that the police would make this very standard request."

Las Vegas police said in a statement that an official request has been submitted to Italian authorities for a DNA sample from the player. Police spokeswoman Laura Meltzer said the request involved a warrant.

The Italian justice ministry, Turin police and the U.S. embassy in Rome had no immediate comment.

After the Bologna game, Ronaldo and Juventus are scheduled to travel to Saudi Arabia for the Italian Super Cup against AC Milan.