​The power to fire his own attorney general, the power to terminate a special counsel investigating his campaign for collusion, the power to pardon his aides from alleged wrongdoing over the Russia scandal — all of it could backfire. Bigly.

In biting remarks on Twitter, U.S. President Donald Trump’s maligning of Attorney General Jeff Sessions as “weak” and “beleaguered” may have sealed Sessions’s fate, throwing into doubt how much longer he lasts as America’s chief law-enforcement officer.

It might also set into motion a constitutional crisis and push the president closer towards potential removal from office.

“I am disappointed in the attorney general,” Trump said at a news conference Tuesday. “He should not have recused himself almost immediately after he took office.”

On the subject of whether Sessions would continue in his role, Trump remarked, “Time will tell,” intensfying speculation he wants to oust the head of the Department of Justice.

But doing so “would come at a clear political cost for Trump,” warns William Howell, an expert on presidential powers at the University of Chicago. Especially, Howell says, if the suspected endgame is to replace Sessions with someone who would end special counsel Robert Mueller’s investigation into Russian meddling into the 2016 election.

“To either remove Sessions in order to put somebody in place who then in turn would fire Mueller, that would be a very big deal,” Howell said. “It would be as close as we can get to articles of impeachment being considered by Congress.”

Sidelining Mueller could strengthen a case for obstruction of justice, he said.

A ‘cataclysm’ in Washington

A sequence of events leading to Sessions leaving and Mueller being removed would “cause a cataclysm in Washington,” Democrat Chuck Schumer, the Senate minority leader, told ABC News.

Potentially complicating matters for Trump is Sessions’ popularity among conservatives in his voting base.

In a rare critique of the president, the extreme-right website Breitbart proclaimed in a headline that Trump’s attacks on Sessions “endangers” Trump’s “immigration agenda” of which Sessions represents “one of the vital pillars.”

Either way, Sessions is in an untenable situation as the head of the Justice Department without the confidence of the president. But he has so far indicated he has no intention of resigning.

The entire Trump-versus-Sessions episode is “jaw-dropping” in how ill-advised it is, says Ken Mayer, a professor of political science who specializes in the constitutional powers of the presidency at the University of Wisconsin-Madison.

While it’s not unusual for presidents to clash with cabinet secretaries, Mayer noted it’s usually over policy disagreements. That doesn’t appear to be the case here.

Sessions, an early Trump loyalist and the first senator to endorse him for president last year, angered Trump as his attorney general for recusing himself from the Trump-Russia probe and for not pursuing prosecution of 2016 Democratic presidential candidate Hillary Clinton. 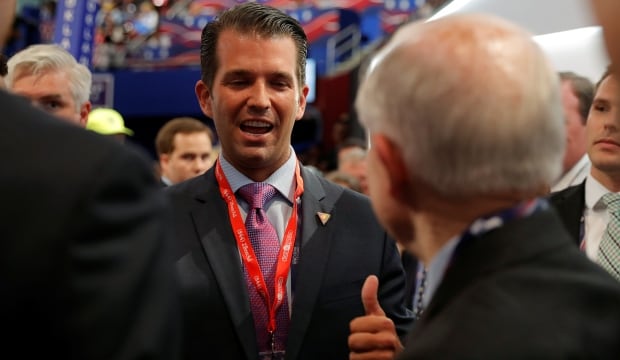 Sessions was among the first to endorse Trump for the Republican presidential nomination. Here, Donald Trump Jr. gives him a thumbs-up after Sessions’ speech to the 2016 Republican National Convention in Cleveland, July 19, 2016. (Brian Snyder/Reuters)

“The real shocker,” Mayer said, “is the overt political pressure to use the law-enforcement function of the federal government to go after a political opponent. That’s almost cartoonish in how bad that is.”

As a function of electoral survival, congressional Republicans may be looking towards the 2018 midterms and feel pressure to criticize Trump for possibly forcing Sessions out, said former federal prosecutor Mark Osler, who teaches law at the University of St. Thomas.

If they view the firing of Sessions as a last straw, Republicans might just abandon the president.

“Republicans may be thinking if they don’t react to this, they’re looking at significant retribution in 2018,” Osler said. The president’s favourability is low, hovering in the mid-30s.

Trump’s suggestions on Twitter that he might — if necessary — pardon family members and aides who met last year with Kremlin-linked associates promising dirt on Clinton could also blow up in his face.

While such pardons would provide Trump’s relatives and associates with a level of immunity from prosecution, that protection would arguably compel them to speak openly if they had to testify before Congress. The resulting testimony might end up being incriminating to Trump.

“Since they’re not liable to charges, you can ask them questions about any issues,” Osler explained.

Schumer said he could not imagine his Republican colleagues “just standing by” were the president to use the powers of pardon this way or try to curtail the Russia investigation.

As in the case of firing former FBI director James Comey, who once oversaw the Trump-Russia probe, firing Sessions would carry unwelcome Nixonian shades.

Jim Thurber, founder of the Center for Presidential Studies at American University, compared the would-be scandal to the infamous “Saturday Night Massacre” of 1973, during which president Richard Nixon ordered the firing of special prosecutor Archibald Cox, who was appointed to dig into Nixon’s role in the break-in at the Watergate complex.

The event eroded public trust in Nixon and ratcheted up calls for his impeachment.

So why aren’t the Committees and investigators, and of course our beleaguered A.G., looking into Crooked Hillarys crimes & Russia relations?

While firing Sessions alone might not be politically ruinous, Thurber agrees it “may trigger the beginning of a discussion about impeachment.”

Sessions’ possible dismissal or pressure to leave office would ignite a “firestorm of media criticism” against Trump, Thurber said, as well as anger both Republicans and Democrats, who would view the independence of the law-enforcement mechanism of the government as being under siege.

“And if he fires Mueller,” Thurber said, “you can be sure we’ll have a major crisis.”