Secretary of State Mike Pompeo and Defence Secretary James Mattis said on Wednesday that downgrading U.S. ties with Saudi Arabia would be a mistake for national security and would not push Saudis in a better direction at home.

Pompeo and Mattis were briefing the U.S. Senate behind closed doors about Saudi Arabia and the Oct. 2 killing of journalist Jamal Khashoggi at the Saudi consulate in Istanbul, as well as the civil war in Yemen.

"The October murder of Saudi national Jamal Khashoggi in Turkey has heightened the Capitol Hill caterwauling and media pile-on. But degrading U.S.-Saudi ties would be a grave mistake for the national security of the U.S. and its allies," Pompeo wrote in an opinion piece for the Wall Street Journal shortly before the briefing for U.S. senators.

Pompeo made the case that the Saudis are too important an ally to lose, citing Saudi Arabia's help to contain Iran in the region, secure democracy in Iraq and fight the Islamic State in Iraq and Syria (ISIS) and other militant groups.

"The kingdom is a powerful force for stability in the Middle East," he wrote. "Saudi Arabia, like the U.S. — and unlike these critics — recognizes the immense threat the Islamic Republic of Iran poses to the world."

U.S. President Donald Trump has insisted that there is not enough evidence to blame Saudi's crown prince, Mohammed bin Salman, in Khashoggi's killing.

Mattis echoed Pompeo's comments on Wednesday, according to remarks sent to reporters.

"I must note we are seldom free to work with unblemished partners … Our security interests cannot be dismissed, even as we seek accountability for what President Trump described as the 'unacceptable and horrible crime' of Jamal Khashoggi's murder," Mattis said.

Democrats and Republicans have accused Trump of ignoring U.S. intelligence that concluded the crown prince likely ordered the killing. Trump, in another apparent clash with his own intelligence agencies, as in the case of Russian election interference, has said the CIA can't conclusively prove the crown prince approved the killing — a standard of proof not often available in the world of espionage.

"The CIA doesn't say they did it," Trump said on Nov. 22. "They do point out certain things. And in pointing out those things, you could conclude that maybe he did or didn't." 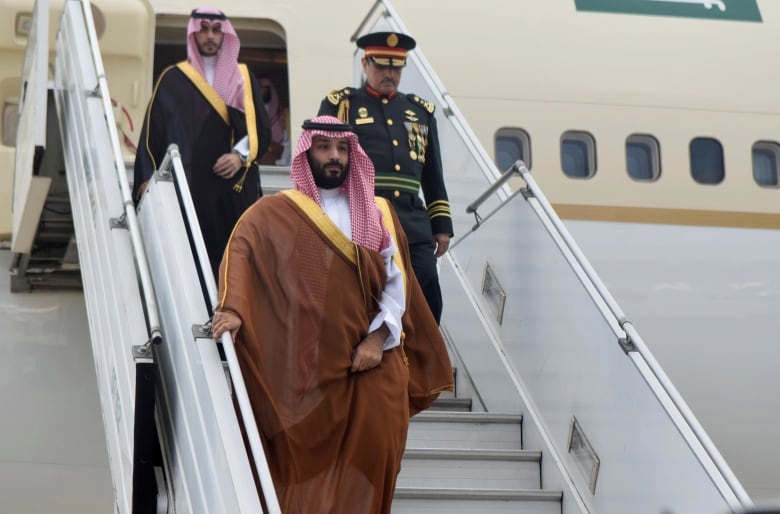 Saudi Arabia's Crown Prince Mohammed bin Salman arrives at Ministro Pistarini International Airport in Buenos Aires on Wednesday. It was unclear what kind of reception the crown prince would get from world diplomats and Argentinians. (G20 via Reuters)

Pompeo met with reporters after the briefing and said he had been privy to all known U.S. intelligence on Khashoggi's killing, which he described as "heinous."

"There is no direct reporting connecting the crown prince to the order to murder Jamal Khashoggi," he said.

Charles Schumer, Senate minority leader, took the administration to task for not making CIA director Gina Haspel available to the briefing, as often occurs in such briefings.

"What is the White House trying to hide?" the New York Democrat said.

"Members of this body have a right to hear from director Haspel, and her absence today speaks volumes — volumes — about the White House's intentions for congressional oversight and Saudi Arabia."

Republican Sen. Bob Corker of Tennessee said after the briefing it was apparent to everyone in the room that the crown prince was responsible for Khashoggi's death.

"We have a problem here. We understand that Saudi Arabia is an ally, of sorts, and a semi important country," said Corker, chairman of the Senate's foreign relations committee. "We also have a crown prince that's out of control."

Democratic Sen. Bob Menendez of New Jersey said Washington was basically telling an ally, "You can kill with impunity."

"It is outrageous that we are willing to turn our eye away from such a murder because we have 'interests,'" he said.

Republican Sen. Lindsey Graham of South Carolina said on he would withhold his vote on any key issue, including upcoming spending bills, until the CIA briefs senators about the killing.

"I am not going to be denied the ability to be briefed by the CIA, that we have oversight of, about whether or not their assessment supports my belief that this could not have happened without MBS knowing," Graham told reporters.

If the briefing supports his view the crown prince knew about the operation, "there will be no more business as usual with Saudi Arabia," said Graham.

Vote on support for Saudis in Yemen

On the subject of Yemen's war, Pompeo said the United States would provide an additional $ 131 million US for food aid.

Gulf Arab states have been battling in Yemen since 2015 to restore a government driven out by the Houthis, Shia Muslim fighters that Yemen's neighbours view as agents of Iran. The war has killed more than 10,000 people and created the world's most urgent humanitarian emergency. 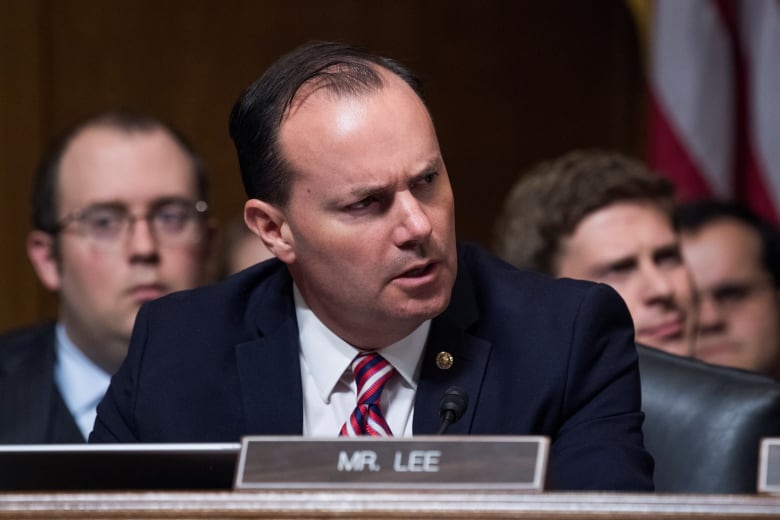 Mike Lee of Utah, a libertarian Republican, has co-sponsored a bill in the Senate to end U.S. military and logistical support for the Saudi-led coalition which has engaged in a yearslong war in Yemen. (Tom Williams/Reuters)

Pompeo recently recertified the effort, as required by Congress, indicating that the coalition was doing its best to limit civilian casualties despite the high-profile incident in which over 50 children were killed in August.

This week, a coalition of five aid groups urged the U.S. and others providing logistical and military support to the Saudi-led coalition to stop to avoid putting millions more at risk of starvation in Yemen.

The Senate could vote as early as Wednesday on a resolution moved forward by Democrat Chris Murphy of Connecticut, Republican Mike Lee of Utah and Bernie Sanders, independent from Vermont, to end the administration's support for the Saudi-led coalition.

Our last vote on Yemen was in March. Since then:<br>- 36,000+ Yemeni children have died of starvation &amp; disease<br>- Saudis bombed a school bus, killing 40 kids<br>- UN classified Saudi actions in Yemen as war crimes<br><br>I'm urging my colleagues to end our role in this humanitarian nightmare

Pompeo urged them to reconsider, saying it could "undermine" a fragile effort undertaken by UN envoy to Yemen Martin Griffiths to broker talks between the Houthis and coalition in Sweden next month.

Saudi Arabia and the United Arab Emirates have also led a blockade of Gulf country Qatar that has gone on for about 18 months.

In the wake of the Khashoggi killing, it has not been clear if the U.S. would push the Saudi-led coalition to end the embargo.

Both sides in the feud host vital U.S. military bases in the region. In Qatar, the al-Udeid air base in the desert outside Doha is home to the forward headquarters of the U.S. Central Command — charged with overseeing all Middle East operations — and bombers, refuelling planes and other aircraft critical to the fight against the Islamic State in Iraq and Syria.

Bahrain, which supports the Saudis and U.A.E., hosts the U.S. 5th Fleet.