Former British foreign minister Boris Johnson set out his stall to the Conservative Party faithful on Tuesday, stopping just short of an outright leadership bid to replace Prime Minister Theresa May but tearing into her Brexit blueprint.

To standing ovations, cheers and laughter, Johnson, May's most powerful critic in her governing party, said her so-called Chequers plan to leave the European Union was a "cheat" that would leave Britain "locked in the tractor beam of Brussels."

But May, who did not watch her former minister, again showed little sign of shifting away from her so-called Chequers plan to keep close ties with the EU after Brexit, the biggest shift in British foreign and trade policy for more than 40 years.

With just six months before Britain leaves the EU, May's precarious position at the helm of her party has been further shaken by criticism of her Chequers plan — named after her country residence — at home and in Brussels.

Johnson, the figurehead for the campaign to leave the EU and the bookmakers' favourite to replace May, has become the loudest critic, warning Conservatives that if they supported Chequers they could be signing up to the party's electoral death. 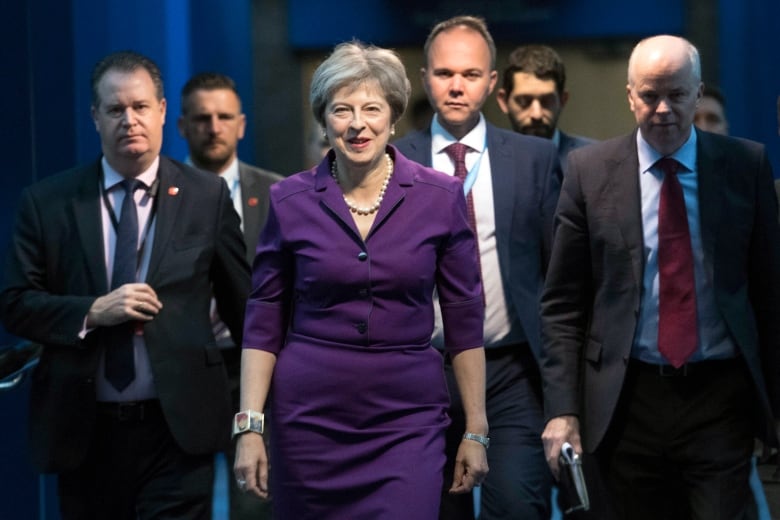 But despite seeming to rally party members to his cause by calling on Conservatives to return to their traditional values, he disappointed some supporters by saying he would stick by May at least for now.

"If we get it wrong, if we bottle Brexit now, believe me, the people of this country will find it hard to forgive," Johnson told the hundreds of Conservatives who queued to get a seat in a hall just across from the main venue where May will address the party's annual conference on Wednesday.

"Do not believe that we can somehow get it wrong now, bodge it now and fix it later," he said to cheers.

"This is the moment to chuck Chequers," he said. "If we cheat the electorate, and Chequers is a cheat, we will escalate that sense of mistrust."

May has shown little sign of moving away from her blueprint, and had tried to put on a show of unity at her party conference in the central English city of Birmingham.

But her bid to revitalize her domestic agenda and steal the initiative from the main opposition Labour Party has been overshadowed by the party splits over Brexit. 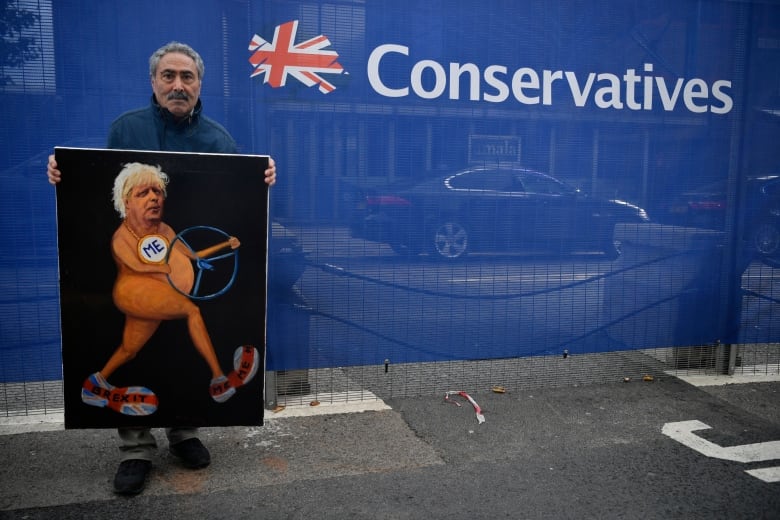 She told the BBC Johnson's alternative Brexit proposals would, she said, tear up the United Kingdom by forcing Northern Ireland to operate separately from the rest of the U.K. On that score she is supported by leader Arlene Foster and the Democratic Unionist Party (DUP), the Northern Ireland party whose 10 seats are helping to keep the Conservatives in power.

"Boris always puts on a good show, but what matters to people is what we are delivering for them on the things that affect their day to day lives," she told Sky News.

Some of Johnson's supporters, while welcoming his speech, said they believed now was not the time to launch a leadership bid against May.

"He is absolutely right about the threat that Chequers poses to our democracy, our country and ultimately the fortunes of the Conservative Party if we stick with it," Andrew Bridgen, a Conservative lawmaker, said.

"Am I disappointed [that he didn't declare]? No, because I think we probably can't have the self-indulgence of a leadership challenge."

But while Johnson may be holding his fire on the leadership for now, he gave both barrels to May's Brexit plan and set out his vision for the Conservative Party — one that returned to its traditional values of low taxes and a strong police.

Naming Margaret Thatcher, the prime minister from 1979 to 1990 who remains a hero to many in the party, he called on Conservatives to build more houses and, while courting business, he struck out at bankers over the 2008 financial crisis.

I want also to congratulate my friend Philip Hammond for predicting that I will never become prime minister, the first treasury forecast in a long time I think to have a distinct ring of truth– Boris Johnson

Johnson suggested the party back one of May's earlier Brexit plans which he accuses her of ditching, and joked about a newspaper report that Finance Minister Philip Hammond did not think Johnson would become prime minister.

"I want also to congratulate my friend Philip Hammond for predicting that I will never become prime minister, the first treasury forecast in a long time I think to have a distinct ring of truth," he said to prolonged laughter and applause.

"It was a great speech, he was optimistic, he talked about Conservative values, and he talked about the opportunities if we do Brexit properly," Richard Tice, co-chairman of campaign group Leave means Leave, said after Johnson's speech.