Prime Minister Justin Trudeau today apologized in Iqaluit for the federal policy on tuberculosis in the mid-20th century, calling it "colonial" and "purposeful," and saying the government knew it was taking a toll on Inuit.

"For too long, the government's relationship with Inuit was one of double standards, and of unfair, unequal treatment," he said.

"Canada must carry that guilt and that shame."

His speech in Iqaluit on Friday morning began by recognizing the various injustices Inuit were facing at the same time as the tuberculosis epidemic. 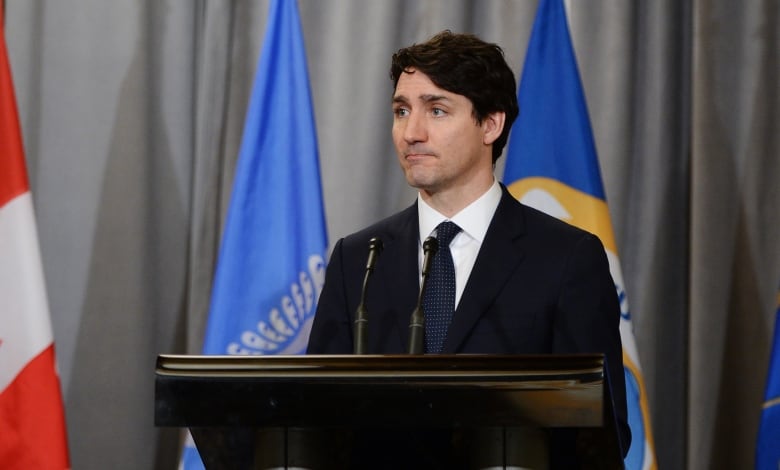 These included the government identifying Inuit with numbers — on leather identification tags — instead of by their names, punishing children for speaking their Inuit languages, having their sled dogs teams killed by officials, and moving them away from their homes to assert Canadian sovereignty.

"Because of all this — the forced relocation, the residential schools, the TB policy — it happened at the same time, to the same people within just a few decades," Trudeau said.

Representatives from the four Inuit regions of Canada that stretch across the Arctic to Labrador have been in Iqaluit for much of the week to hear the apology from the prime minister.

The racism and discrimination that Inuit faced, was, and always will be, unacceptable.– Justin Trudeau, PM

Inuit were separated from their family members and taken to Southern Canada for tuberculosis treatment from the 1940s through the '60s. Many patients lived in sanatoriums for years, and their families often weren't told about their whereabouts or conditions, even when they died.

On Friday, Trudeau spoke at Iqaluit's Frobisher Inn. Weather delays had forced him to cancel the ceremony Thursday.

"The racism and discrimination that Inuit faced, was, and always will be, unacceptable." 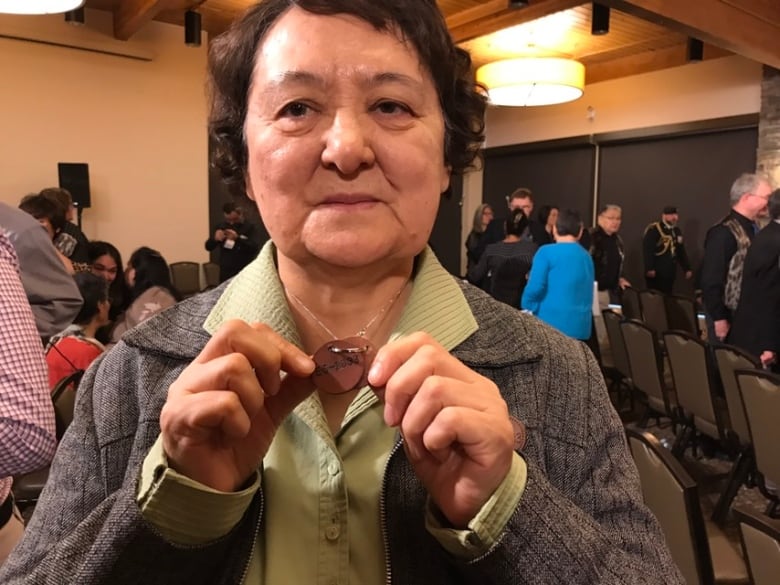 Nicole Ittinuar Sikma shows her 'Eskimo tag,' in Iqaluit at the apology ceremony. Trudeau's speech talked about how the federal government used to identify Inuit with numbers instead of names. (Sara Frizzell/CBC)

The apology is long overdue, Trudeau said. Formal plans for it were conceived in 2017 as part of the Inuit-Crown partnership signed by Trudeau and Inuit leaders in 2017.

"We are sorry that, because we waited, there are many loved ones who never heard this apology," he said.

Part of the apology is the launch of the Nanilavut initiative, a database that will make records available to Inuit to facilitate finding family members' gravesites.

Nanilavut means "let us find them." Work on collecting the records has been ongoing for almost a decade. 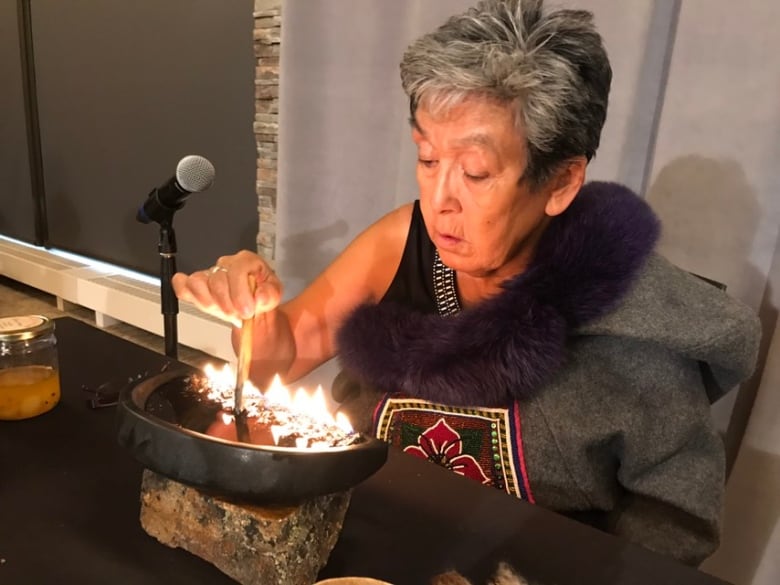 "I can't begin to imagine what it would be like to lose someone you love, and to go on never knowing what happened," Trudeau said.

In his speech, Trudeau promised the federal government will do better. It will provide money to each of the four land-claims organizations, which represent the four Inuit regions of Canada.

While there was no dollar figure attached, he said the money will support travel costs for some families who have found where their relatives are buried, and will pay for marking graves and creating plaques.

He said he's aware past treatment of Inuit could make those living with the disease today wary of seeking treatment. 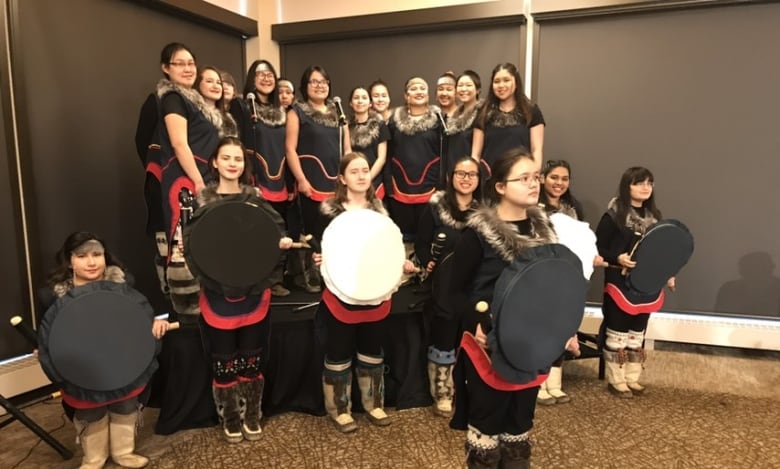 "Inuit are Canadian citizens and were Canadians during the time that this TB epidemic was happening," said Natan Obed, president of Inuit Tapiriit Kanatami, after Trudeau's speech.

He asked for a moment of silence for those who died in the South, those still lost, and those who couldn't make it to the apology.

As Friday's ceremony got underway, Aluki Kotierk, president of Nunavut Tunngavik Incorporated, called it an emotional day, and counsellors were being made available in Iqaluit.

"There's no doubt we are being heard," she said.

Nicole Ittinuar Sikma, a justice of the peace from Chesterfield Inlet who attended the event on Friday, called the apology wonderful. She showed CBC her "Eskimo tag," an identification number the federal government used to give Inuit.

She said when she was two years old her mother left for tuberculosis treatment for six years.

What about other Indigenous groups?

Marie Speakman, who's from Deline, N.W.T., says it feels like a "slap in the face" that Trudeau is only apologizing to Inuit, who she calls her "brothers and sisters."

"The Dene people and the Inuit people have all gone through so much and so many types of trauma and abuse from residential school, to day school, to the Indian hospitals where they sent people with TB," she said. Marie Speakman, who's from Deline, N.W.T., says it feels like a 'slap in the face' that Trudeau is only apologizing to Inuit, who she calls her 'brothers and sisters.' (Juanita Taylor/CBC)

"So I think an apology should not be one certain group. You know we were all affected."

Speakman said her grandfather went to Edmonton in 1962 for tuberculosis treatment when she was five years old, and he died there. She still thinks about the cultural shock he must have endured, without speaking English, and having no one to advocate for him.

"He's buried there somewhere but we don't know where,"

Her mother died last year at age 88, and Speakman said she still talked about her father. "It's like a missing person."

Speakman thinks people in the Northwest Territories should also get an apology from Canada so they too can have closure for the intergenerational harm. She has asked Liberal MP Michael McLeod if that will be forthcoming.

Duane Smith, chair of the Inuvialuit Regional Corporation, is part of the Inuit delegation in Iqaluit, and believes Trudeau's efforts to get to the Nunavut capital "demonstrates his commitment to reconciliation and building a better relationship with Indigenous peoples."

A large number of Inuvialuit in the N.W.T. were affected by the tuberculosis crisis. While he said the apology is "a bit overdue," it's appreciated.

"It means a lot to us and other Inuit across Inuit Nunangat." 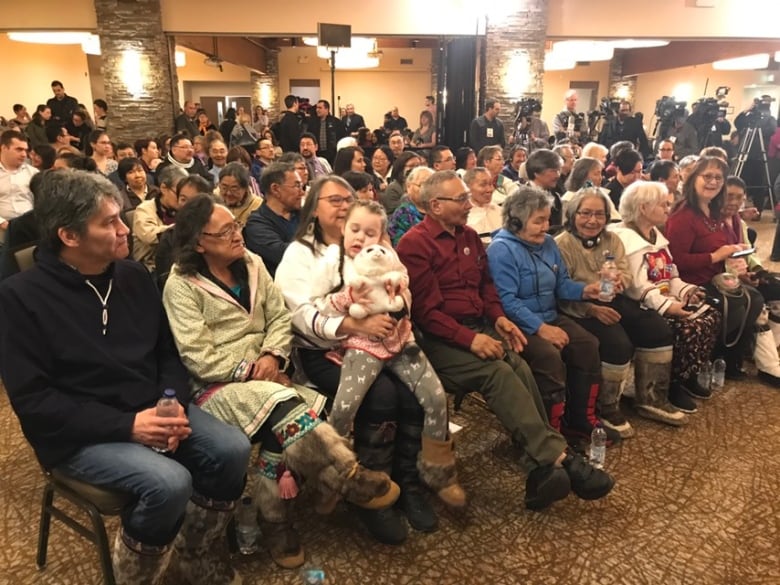 The Frobisher Inn in Iqaluit was packed Friday morning for the apology. (Sara Frizzell/CBC)

Former patients and immediate family members of people who died in Southern Canada were among those hearing the prime minister deliver the apology.

A representative with Nunavut Tunngavik Inc. estimates there are between 700 and 800 people who never returned home, and whose gravesites remain unknown.

Tuberculosis, an airborne disease, can be cured with treatment. The Public Health Agency of Canada says there were 1,796 active cases diagnosed in Canada in 2017. The rate of TB infection is much 290 times higher in Canada's North than it is in the rest of the country. 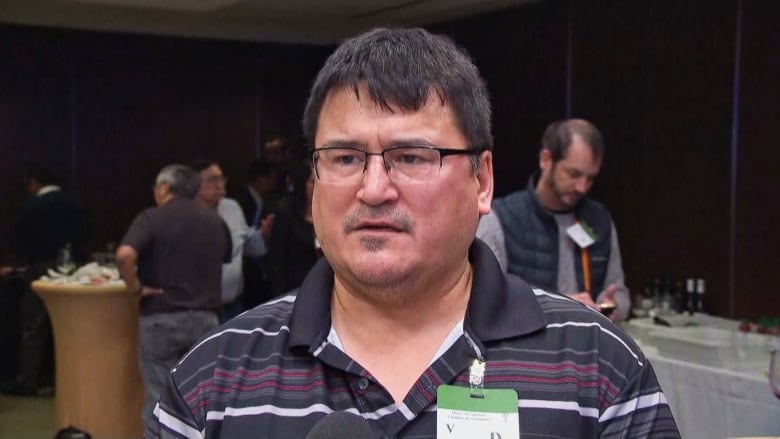 'It means a lot to us and other Inuit across Inuit Nunangat,' says Duane Smith, chair of the Inuvialuit Regional Corporation, of the apology. (Elyse Skura/CBC)

Kelly Fraser, a Juno-nominated singer from Nunavut, says she hopes the government will provide more adequate housing in the territory, since tuberculosis spreads easily in the territory's many poorly ventilated, overcrowded homes. She'd also like to see doctors in every community.

"I very much want to stress that non-Inuit, non-Indigenous, there's a responsibility, you have to help us heal and to understand we need that healing with you."

Canada’s health minister, the province of Ontario and the Nishnawbe Aski Nation have signed a deal on health care, a “landmark” agreement they say will begin the process of decolonizing the provision of care in the province’s north.

The three governments agreed to a series of principles that any First Nation-led health-care system must adhere to, while vowing to pool money to better address poor health outcomes in Ontario’s northern and remote reserves.

It is the first step in a longer process of turning over health care in northern Ontario to First Nations themselves, and allowing them to decide how best to spend money, staff nursing stations and provide care for people in need, the health ministers said Monday. Currently, the delivery of health care for status Indians is largely the responsibility of the federal government.

The agreement comes after a particularly brutal spate of youth suicides on reserves in the far reaches of the province.

Alvin Fiddler, the grand chief of NAN, an organization that represents 49 reserves in northern Ontario, said First Nations used to have their own systems of care, and it worked well for generations.

“Because of the last 150 years, because of the colonial history of this country, many of [our systems] have been broken,” he said.

“Despite the many tragic events that you hear about almost on a daily basis, there’s still a lot of good things in our communities that we can build upon,” he said, adding NAN already has control over some aspects of health care.

“The system as it’s constructed, the colonial health-care system, is not providing the access, equity and positive outcomes we would expect for any of us who are not First Nations, who are not Indigenous,” Ontario Health Minister Eric Hoskins said after the signing ceremony.

Hoskins said there are a plethora of problems, from the absence of oxygen tanks for pregnant women giving birth, to the endemic rate of bacterial skin infections among young children.

The Ontario minister said all levels of government are working now to address this “untenable situation.”

“For the first time in Ontario’s history we’re talking about a complete transformation of the system to one that is under the guidance and leadership of NAN. It’s First Nations planned, developed and implemented,” he said. “It’s a pretty profound change.”

“The systems as they are functioning now were not designed in a way that is in the best interest of First Nations, and that’s exactly what we’ve acknowledged by saying we need a new approach, the system needs a transformation,” federal Liberal Health Minister Jane Philpott said. 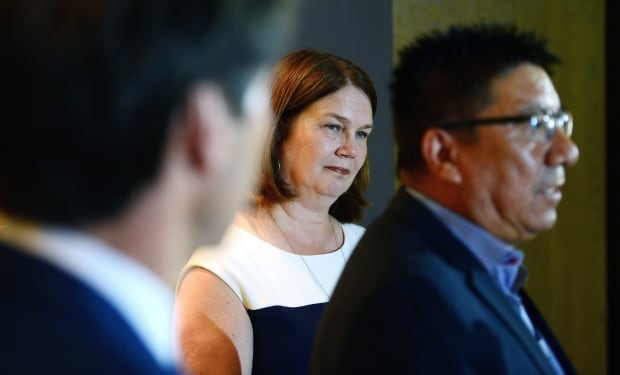 The agreement signed Monday did not include details on any new spending, or how a move towards a First Nation-led health system would now proceed, but further negotiations are expected.

Hoskins pointed to the system currently in place in British Columbia, where the federal government, the province, and local First Nations signed a tripartite agreement that handed over control of health care to Indigenous people. The First Nations Health Authority assumed the programs, services, and responsibilities formerly handled by Health Canada’s First Nations Inuit Health Branch.

Philpott said this medium-term plan to change the delivery of care is not meant to serve as a distraction from the current and pressing problems that many northern Ontario reserves face. She said the three levels of government are working on a Pikangikum action plan, named after a remote community located near the Manitoba border that has long struggled with a suicide crisis

Hoskins said Ontario will immediately send 20 new full-time mental health workers to Pikangikum First Nation — at a cost of about $ 1.6 million — and will remain as long as needed. 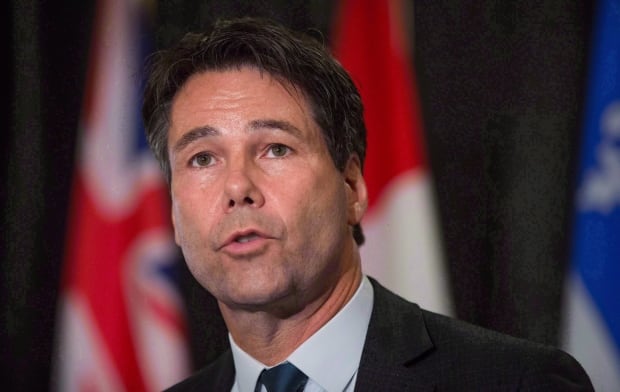 Ontario Health Minister Eric Hoskins said the province will immediately send 20 new full-time mental health workers to Pikangikum First Nation — at a cost of about $ 1.6 million — and will remain as long as needed. (Darryl Dyck/Canadian Press)

The investment comes after the province heard from the community about a serious need for trauma and mental health supports, including from about 380 people seeking counselling.

The move comes after doctors working in Ontario’s north sent a letter to the health ministers demanding a transformational approach to a broken system that often leads to mental health crises.

“While government bureaucracies maintain funding and health-system design, First Nations are left with the blame for health-system failure,” said the letter signed by some 20 doctors.

“They are also left with the results of health-system failure — more suicides, more disease morbidity and more broken families and communities.”