The thrill of being named to Canada's team for this week's IAAF world U20 championships is over, says its rookie head coach. It's time to focus, perform and reach the podium with regularity.

Joel Skinner is impressed with the talent level and experience of the 32-member squad that is among 1,466 athletes from 160 countries competing at the six-day meet in Tampere, Finland, starting Tuesday (CBCSports.ca, 2 a.m. ET).

"I think we have a competitive crew," says Skinner, a 15-year coach based in Sarnia, Ont., who has worked previously with three Canadian world junior teams. "I've done some analysis of stats from the past world junior championships and we're going to do well.

"Our top end is very good and we're just hoping that some of our kids that are looking to break through in the top 16 and top eight in the world [in reaching the finals] get it done."

While Canada hasn't been overly successful at the world U20 event, Skinner is looking for each of his athletes to improve on their past successes. 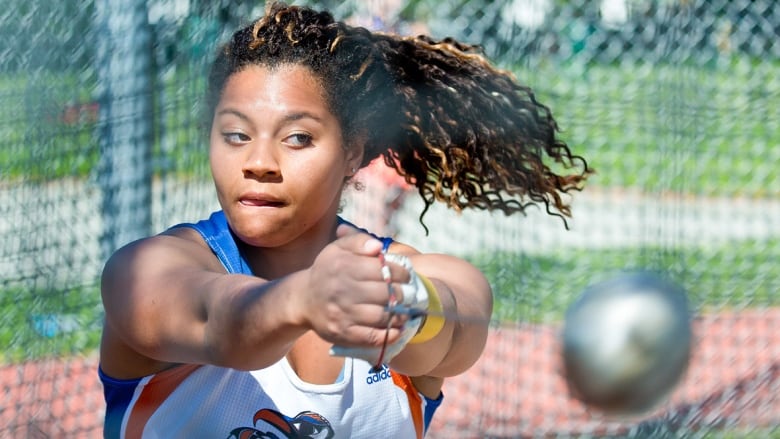 Hammer thrower Camryn Rogers, of Richmond, B.C., is one of four returnees to the Canadian team. In her freshman year at the University of California-Berkeley, the 19-year-old twice broke the school record with the furthest throw measuring 65.61 metres. (Submitted by Gord Goble/Richmond News)

Skinner noted "we've had a bunch of kids pop out of the woodwork and do great things" this year and several of the athletes had success at their respective high school championships.

"The world U20 event is the ultimate springboard for these athletes. The mentality from a lot of the kids that qualify for [national] teams like this has shot their expectations through the roof a little and pushed them in their training."

Skinner said exposing the young Canadian athletes to big crowds at 16,800-seat Tampere Stadium, along with the rigours and format of high-level competition, is very important for them to progress through the system to the senior level. Track and field in Scandinavian countries like Finland is hugely popular, especially in a smaller community like Tampere with a population of 225,000.

"They have a tendency to rally around their community and obviously their athletes," Skinner said. "We are setting up [our athletes] for success, not only at this meet but beyond and into their senior years."

Here are some Canadian athletes to watch in Tampere:

Anastas Eliopolous, 110-metre hurdles – Ranked fourth in the event, the Vancouver athlete's personal-best time of 13.73 seconds is the fifth fastest U20 time in the world. The 19-year-old Eliopoulos ran a blistering 13.36 last July to win a silver medal and set a Canadian record at the PanAm U20 Games in Peru. The old mark of 13.43 was held by Jonathan Cabral, who clocked 13.64 to beat Damian Warner for a Canadian title on Saturday.

Grace Fetherstonhaugh, women's 3,000 steeplechase – The New Westminster, B.C.-born runner capped her high school track career with a steeplechase victory and second-place finishes in the 3,000 and 1,500. At 10:01.95, Fetherstonhaugh is the world No. 11 U20 steeplechaser. This fall, the 17-year-old will attend Oregon State University near Portland on a full scholarship and plans to study kinesiology.

Trinity Tutti, women's discus throw/shot put – At her final track and field meet last month, the 18-year-old from Welland, Ont., won gold in senior girls' shot put and posted her sixth Ontario Federation of School Athletic Associations record with a throw of 15.25 metres. The previous mark of 14.86 belonged to current Canadian-record holder Brittany Crew. Tutti plans to take a year off school to focus on training. 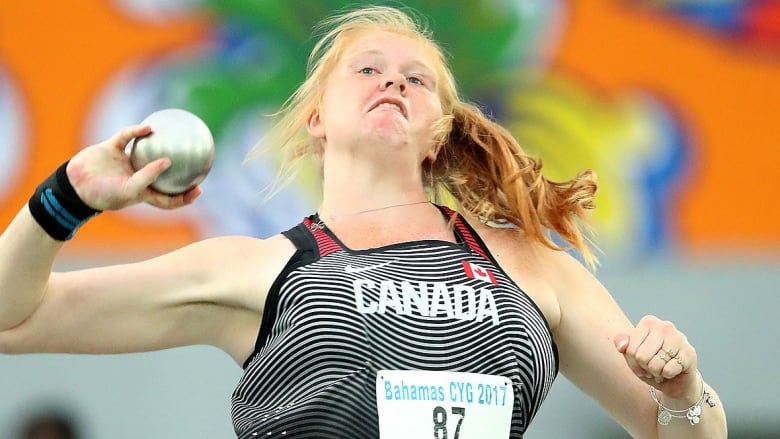 Trinity Tutti, 18, capped her final year of high school in June by setting an Ontario Federation of School Athletic Associations shot put record with a throw of 15.25 metres. (Getty Images/File)

Camryn Rogers, women's hammer throw – Rogers, 19, enjoyed a standout freshman year at the University of California-Berkeley where the Richmond, B.C., native finished third at the Pac-12 Championships (64.25m) and twice broke the school record in April. The second time her throw of 65.61 put her second to 2016 Olympic bronze medallist Sophie Hitchon of Great Britain.

Xahria Santiago, women's 400 hurdles – She just completed her freshman year at the University of Maryland, where the 18-year-old Santiago placed second and earned All-Big Ten honours with a personal-best 56.69 seconds at the Big Ten Championships in May. At the 2016 world U20s in Poland, the native of Ajax, Ont., finished third in the 400 hurdles in 56.90. 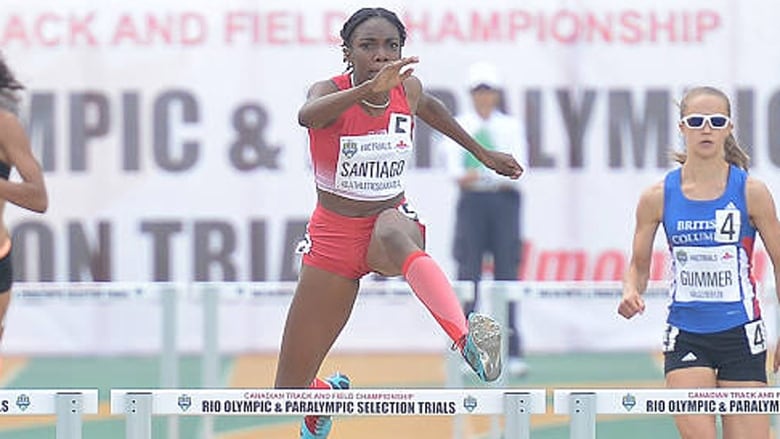 A freshman this past year at the University of Maryland, 18-year-old hurdler Xahria Santiago placed second and earned All-Big Ten honours with a personal-best 56.69 seconds in the 400 metres at the Big Ten Championships in May. (Getty Images/File)