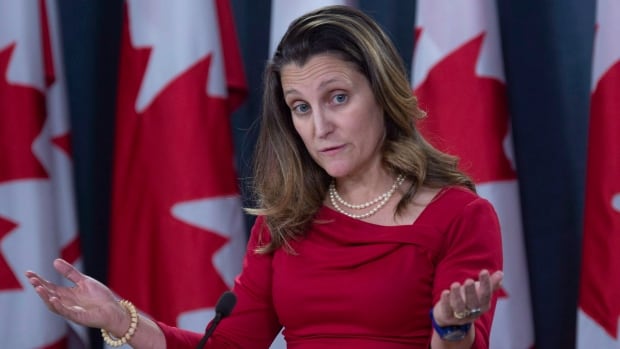 Foreign Affairs Minister Chrystia Freeland says China's detention of two Canadian citizens in apparent retaliation for the arrest of a top Chinese tech executive is a worrying precedent that has resonated with allies.

Freeland said Saturday on a conference call with reporters that it's an issue that concerns partners around the world, and Canada will continue having discussions about it.

Michael Kovrig, a former diplomat and an adviser with the International Crisis Group ICG think-tank, and Michael Spavor, a businessman, were detained last week.

"Canada absolutely has options and Canada is working hard in a very concerted, organized way to secure the release of Mr. Kovrig and Mr. Spavor," Freeland said.

Canada spoke strongly on Friday in making its first demand for China to immediately release its citizens. The U.S., the U.K. and the EU also issued statements in support of Canada.

"We are very hard at work. We understand that working co-operatively, collectively with allies, is a very effective way for Canada to work in the world and that is what we have been doing," Freeland said.

Meng Wanzhou, a top executive of Chinese telecom giant Huawei, was arrested in Vancouver on Dec. 1 at the request of the U.S., which wants her extradited.

Meng, 46, was released on bail last week, under strict conditions, including that she must wear an ankle monitor and stay at her Vancouver home from 11 p.m. to 6 a.m.

Freeland said Chinese authorities had not drawn a direct connection between the detention of the two men and the Huawei executive's arrest.

Canadian analysts and former diplomats said they have no doubt the cases are linked.

"One point we have been raising with our allies … is the concern about the worrying precedent that the arbitrary detention of these two Canadians sets. That's a point that has really resonated," said Freeland.

Sources have told Reuters that Kovrig, one of the two men, was not allowed to see a lawyer. He is being questioned every morning, afternoon and evening and is not allowed to turn the lights off at night.

Freeland said she raised the conditions of the two men's detention when she spoke to China's ambassador to Canada on Friday, but did not give details of the conversation.

"We continue to be in discussion with China … this is clearly a difficult moment in our relationship with China. It's important to keep on talking and raising the issues directly with them," she said.

The Chinese Embassy in Ottawa did not immediately respond to a request for comment.

On Friday, the U.S. State Department reiterated a call for the Canadians' release made by U.S. Secretary of State Mike Pompeo.

U.K. Foreign Secretary Jeremy Hunt said in a statement the U.K. is confident that Canada is respecting its extradition treaty with the U.S. and that he is "deeply concerned" that China may have detained the two Canadians for political reasons.

The EU, meanwhile, issued a statement saying the "declared motive" for their detention "raises concerns about legitimate research and business practices in China."

Freeland thanked allies for speaking out.

The show of support from allies is significant for Canada, which has felt relatively isolated in recent months. In August, Saudi Arabia expelled Canada's ambassador to the kingdom and withdrew its own ambassador after Canada's foreign ministry tweeted support for an arrested Saudi activist.

The Saudis also sold Canadian investments and ordered their citizens studying in Canada to leave. No country, including the U.S., spoke out publicly in support of Canada.