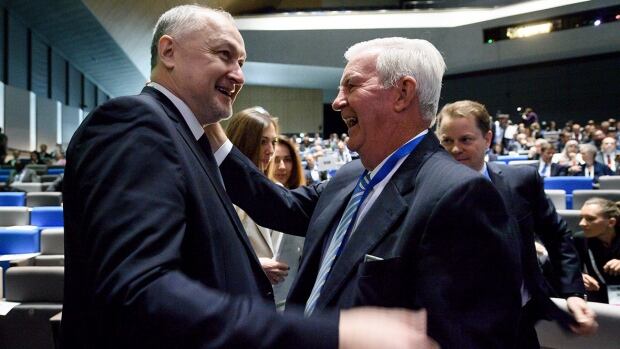 Beyond those associated with Russian sport, it was hard to find anybody in the global athletic community pleased with World-Anti Doping Agency's decision Thursday to reinstate Russia.

The decision, delivered from a luxury resort in the remote Seychelles was problematic on many levels.

WADA asked Canadian lawyer Richard McLaren to look into what happened in at 2014 Sochi Olympics. He issued a report outlining a brazen state-sponsored doping regime in the lead-up to the Games.

At the time, Russia's roadmap to compliance seemed quite straightforward. If Russia acknowledged that the doping program was sponsored by the state and allowed investigators access to doping records and laboratories, the world could move forward from one of the greatest doping scandals to ever touch sport.

Except Russia did neither.

The confounding chain of events has turned a spotlight on WADA and its ability to protect clean athletes and ensure fair competition.

"One can only speculate that it has to do with power, money, [and] influence. I think that it demonstrates that WADA is not acting independently," said Paul Melia, head of the Canadian Centre for Ethics in Sport, the body responsible for drug testing Canadian athletes.

He and others said Thursday's decision provides an opportunity to scrutinize WADA's governance structure and funding. WADA receives half of its roughly $ 30-million US budget from the International Olympic Committee (IOC). Half of its executive board is also directly tied to the IOC and the Olympic movement. That's why many saw WADA's decision on Thursday coming for months.

Quite simply, the IOC wanted Russia back in. Melia pointed out that the IOC has allowed Russian athletes to compete at the last two Olympics, despite evidence of widespread doping.

"Quite frankly [WADA is] acting like the lapdog of the IOC," Melia said. "They're doing the IOC's bidding. The IOC had already reinstated Russia into the Olympic family after Korea. And they wanted Russia reinstated with respect to anti-doping."

"So I'm guessing that they put pressure on to WADA and WADA's governance is not sufficiently independent that it was able to withstand that pressure."

CBC Sports' Jacqueline Doorey gives a timeline of the ongoings leading up to WADA's vote to reinstate the Russian anti-doping agency. 2:49

The other half of WADA's funding comes from government contributions from member countries. In 2018, Canada was one of the world's biggest contributors, giving nearly $ 1.2 million. Russia contributed just under $ 900,000.

"WADA is run and funded partially by the Russian government and various other governments. It's a clear conflict of interest," Larkin said. "As many of us have been pointing out for years, this [is] kind of setup where anti-doping is deeply flawed because, as we all know, there are foreign governments who use sport for propaganda purposes, for geopolitical purposes.

"When you've got government involvement in the administration of sport, which is sometimes used for propaganda purposes, you've got conflicts of interests."

Melia and Larkin said a reformed WADA must make decisions based on science that actually puts athletes first.

"What I want to see there is a governance structure that has an executive committee that is totally independent and expert based in governing WADA and WADA's operations," Melia said.

"And ability to ensure compliance with the code is not interfered with by sport organizations or by the IOC going forward."

"If governments and countries around the world and the sport organizations that are the funders of WADA have to accept that if they want an effective regulator, they have to accept a different governing structure."

'A black day for athletes':

A statement Thursday from the Canadian Minister of Science and Sport Kirsty Duncan said WADA's "decision undermines the fight against doping in sport."

Does that mean the Canadian government will re-evaluate its WADA funding?

And then there are the sponsors. Melia said WADA needs to let the IOC know that its handling of Russia is unacceptable and an impediment to doing business going forward.

"They would have a great influence because the IOC is all about making money. The integrity of sports seems to be secondary."

No athletes on WADA's executive committee

And then, of course, there are the athletes. Why do they have so little influence in a process that directly affects them? Why is there no athlete voices on the 12-person WADA executive committee that overwhelming voted to reinstate Russia?

Three-time Canadian Olympian Beckie Scott has been a committed advocate for clean sport since her retirement. When it became clear WADA would reinstate Russia, she resigned her position on the organization's compliance committee. But she said there's no plan to leave her post on WADA's athlete committee.

"I think the WADA Athletes Committee [has] probably been more galvanized and more mobilized than ever before over [with] this particular decision," Scott said. "In fact, at one point I did discuss the option of resigning but have concluded we have a really important role to play in the sporting landscape and we're not going to give up now."

Head of WADA's athletes committee is 'profoundly disappointed' with decision 6:53

Melia said the time is now for athletes to have more say.

"I think now clean athletes … need to find a way to unite," he said.

"Call it a union. I don't know what you call it. But they need to have some leverage, some power, some influence at the IOC table so that they can have a say about this and other issues that affect them."