North Korea said on Wednesday it had conducted a test of an intermediate-range ballistic missile (IRBM) to counter U.S. and South Korean military drills and as a first step in military action in the Pacific to “contain” the U.S. territory of Guam.

The North’s leader, Kim Jong-un, ordered the missile drill to be conducted for the first time from its capital, Pyongyang, and said it was necessary to undertake more exercises with the Pacific as the target, the North’s KCNA news agency said. 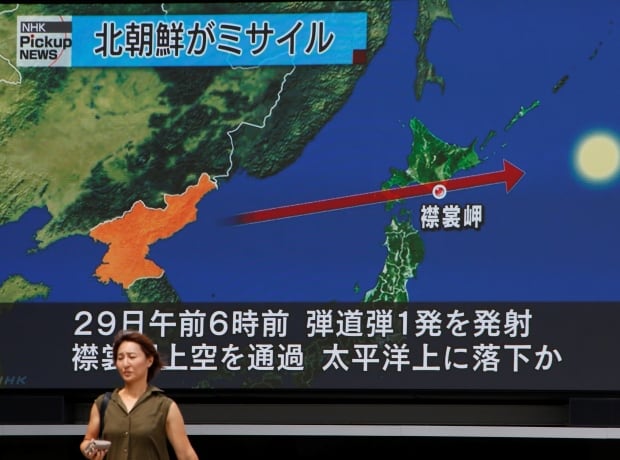 A woman walks past a large TV screen in Tokyo that shows news about North Korea’s missile launch on Tuesday. Earlier this month, North Korea threatened to fire four missiles into the sea near the U.S. territory of Guam. (Kim Kyung-hoon/Reuters)

“The current ballistic rocket launching drill like a real war is the first step of the military operation of the KPA in the Pacific and a meaningful prelude to containing Guam,” KCNA quoted Kim as saying. The Korean People’s Army or KPA is the North’s military.

Earlier this month, North Korea threatened to fire four missiles into the sea near Guam, home to a major military presence, after U.S. President Donald Trump said the North would face “fire and fury” if it threatened the United States.

‘All options are on the table’

Tuesday’s test was of the same Hwasong-12 missile Kim had threatened to use on Guam, but the test flight took it another direction, over northern Japan’s Hokkaido and into the North Pacific Ocean. 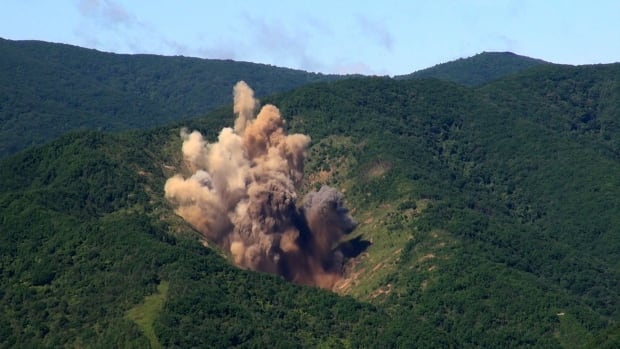 Trump, who has vowed not to let North Korea develop nuclear missiles that can hit the mainland United States, said the world had received North Korea’s latest message “loud and clear.”

“Threatening and destabilizing actions only increase the North Korean regime’s isolation in the region and among all
nations of the world. All options are on the table,” Trump said in a statement on Tuesday.

The launch came as U.S. and South Korean forces conducted annual military exercises on the Korean peninsula, angering Pyongyang, which sees the war games as a preparation for invasion.

In a statement the 15-member Security Council said it was of “vital importance” that North Korea take immediate, concrete actions to reduce tensions and called on all states to implement UN sanctions on Pyongyang.

However, the U.S.-drafted statement, which was agreed by consensus, does not threaten new sanctions on North Korea.

Diplomats say veto-wielding council members China and Russia typically only view a test of a long-range missile or a nuclear weapon as a trigger for further possible sanctions.

China and Russia’s ambassadors to the United Nations said they opposed any unilateral sanctions on North Korea and reiterated calls to halt deployment of a U.S. missile defence system in South Korea.

“I certainly hope that we’ll be able to have a strong resolution following up this … statement,” Japan’s Ambassador to the United Nations Koro Bessho told reporters after the meeting.

North Korea has conducted dozens of ballistic missile tests under Kim in defiance of UN sanctions, but firing a projectile
over mainland Japan was a rare and provocative move.

Reports of the launch by North Korean media were lacking the usual boasts of technical advances, indicating the test may not have accomplished its intended technical goals. 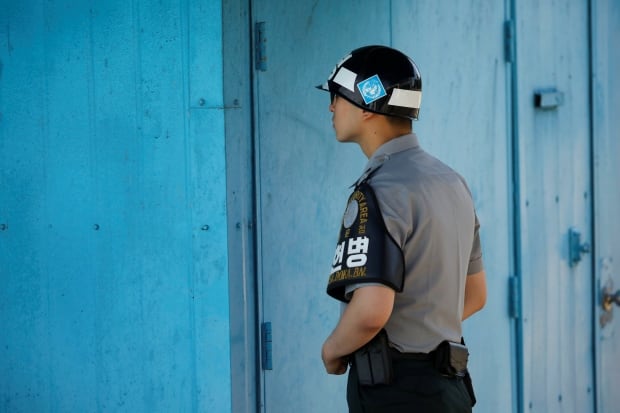 The 2,700 kilometres the missile flew before splashing down was much shorter and at a lower trajectory than that of an
earlier and lofted launch of the same missile. The May launch would have had a range of about 4,800 km on a standard
trajectory, an expert on missile technology, David Wright said.

“It is not clear what new North Korea would have learned from this launch that is relevant to a long-range missile,”
Wright of the Union of Concerned Scientists said.

The shorter range points to an intended early cutting of the engine thrust or a possible mechanical problem, as the
trajectory taken would not have been useful in simulating re-entry or heating of the missile, Wright wrote in a blog post. 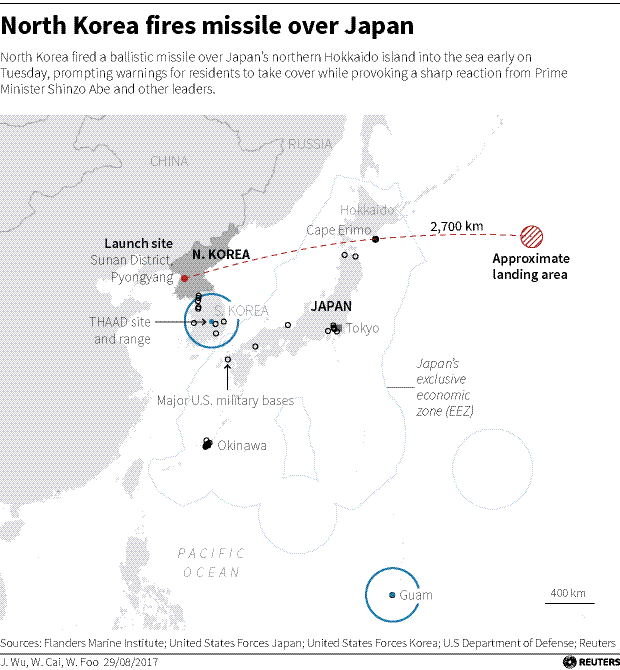 Japan reacted sharply to the missile overflight, warnings residents to take cover as the missile approached and raising
protests at the United Nations.

The United States has said before that all options, including military, are on the table, although its preference is
for a diplomatic solution.

U.S. Ambassador to the United Nations Nikki Haley said the launch was “absolutely unacceptable and irresponsible” and that the Security Council now needed to take serious action. 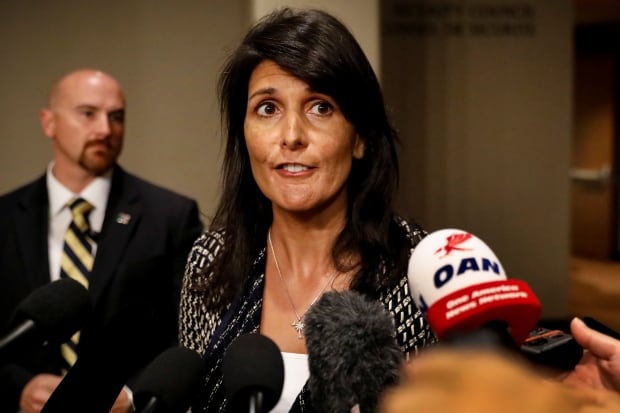