When authorities in Thailand were assembling a group of rescuers to search for a soccer team lost in a flooded cave,  their first calls went to a retired firefighter and an IT consultant in England.

Rick Stanton and John Volanthen were the first to reach the 12 boys and their coach inside the Luang Nang Non Cave in Chiang Rai province on Monday.

It is their voices that can be heard talking to the boys and giving them calm reassurance in a dramatic video released by the Thai navy. They are working with Thai navy SEALs, who are leading the rescue operation.

Stanton, the retired firefighter from Coventry, and Volanthen, who does IT consulting work in Bristol, have years of experience in cave rescues and have helped map the Luang Nang Non Cave.

"Brits are probably one of the best cave-diving teams," said Dinko Novosel, head of the European Cave Rescue Commission, even before the search mission proved successful.

Chris Jewell, a member of the British Cave Rescue Council, confirmed that the divers on the video were Stanton and Volanthen.

Divers found the boys, coach about two kilometres inside the labyrinth-like system of caves 0:59

It's not the first time they have lent their expertise to an international rescue effort.

Stanton, who was made a Member of the Order of the British Empire, or MBE, in 2012, previously described his most memorable life-saving effort as the 2004 rescue of six soldiers trapped by rising floodwaters in Mexico.

"They were trapped for nine days, and we had to teach a few of them to dive through a considerable length of passage to get them out," Stanton told the Coventry Telegraph newspaper in 2012. "It took about nine hours to get them all out."

Alex Daw, a West Midlands Fire Service watch commander who supervised Stanton for six years, said his experience as a firefighter serves him well. Besides that, Stanton also is known as a tinkerer — a technician always making sure his equipment will help him go "farther, further under water, in the dark." 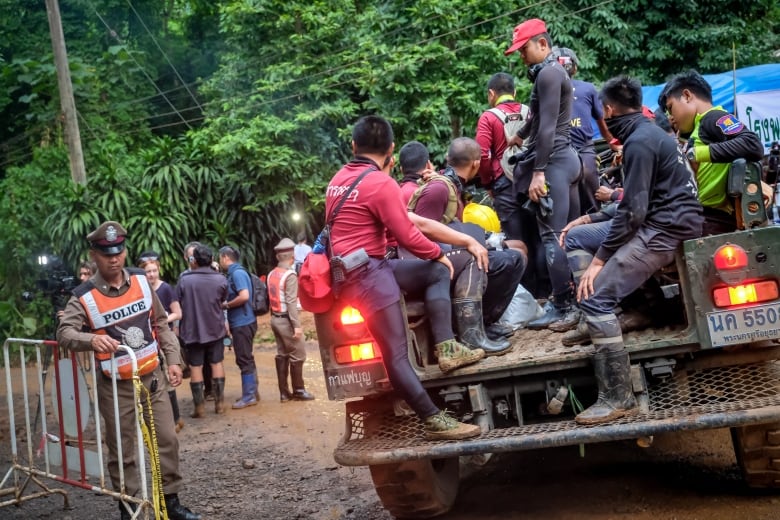 Rescuers and stores of equipment are still being sent in to assist the rescue operation after the 12 boys and their soccer coach were found alive in the cave where they had been missing for over a week. (Linh Pham/Getty Images)

"If the kids have got someone there like him, they're safe," Daw said without hesitation. "He's cool, calm and collected."

Volanthen was Stanton's partner on the French rescue attempt.

Volanthen told the Sunday Times in 2013 that cave diving is not the pursuit of those who crave thrills.

"The flight response now isn't always appropriate," he said. "Panic and adrenaline are great in certain situations, but not in cave diving. The last thing you want is any adrenaline whatsoever."

Both men are members of the South and Mid Wales Cave Rescue team. A third Briton, Robert Harper, is working with them in Thailand after Thai authorities contacted the British Cave Rescue Council for help when the boys disappeared June 23.

The British divers left London on June 26 with special rescue equipment, including radios designed to work in caves.

British cavers have helped survey and catalogue many caves in Thailand because there are only a few people with such experience in the country, the council said in a statement last week.

"Many British cavers, including specialist cave divers, active on such expeditions, also serve as volunteers in cave rescue teams across Britain and Ireland and bring with them valuable knowledge of the layout of overseas cave systems," the council said.

The euphoria of finding the soccer team and their coach alive has quickly turned to the sober reality of how to extract them from the cave. Heavy rains are forecast, and that could worsen the flooding in the cavern, possibly forcing authorities to have them swim out through a narrow, underwater passage. 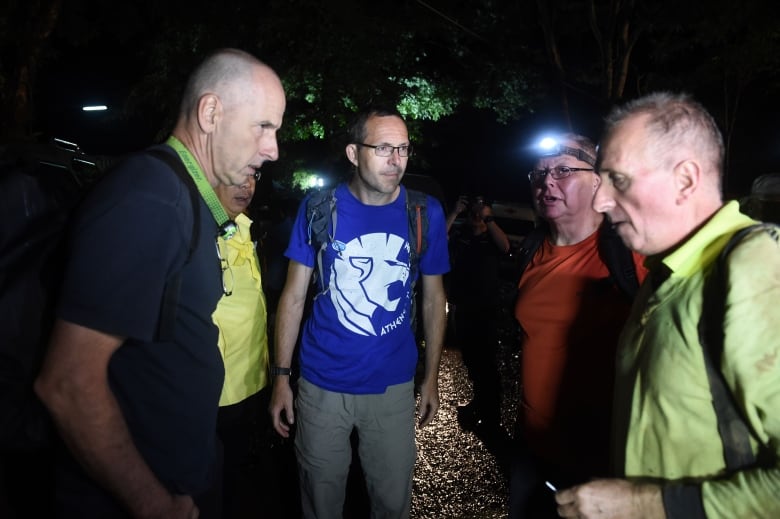 Gary Mitchell, the assistant vice-chairman of the British Cave Rescue Council, said that helping the boys dive out could take time, particularly since they are assumed to have no diving experience and because they will be in a weakened state.

"They may start to dive them out in small batches into small, into other chambers, other pockets of air, and do that over a staggered period of time," he told The Associated Press. "Obviously, the biggest risk really is current rainfall. If it keeps raining or starts to rain and water levels rise then there's a bit more immediacy required."

New opening may not be an option

Drilling an opening would be a problem because of the need for determining with pinpoint accuracy where they are inside the cave. While stressing that the Thai military is in charge, Mitchell believes they are working under the assumption that the group is about 800 metres to a kilometre below the surface — meaning the need to drill through solid rock.

"Drilling from the top of a jungle mountain ridge is really tricky," he said.

Thai searchers also have been searching for a fissure that might lead to a shaft that could be a kind of "back door" to where the soccer team is sheltered. So far, they have not found one that goes far enough.

For Stanton, such curiosity about finding the right path in a cave seems to motivate him.

He once told the online site Divernet: "I'm only interested in the cave, where it's going and how it ends. I suppose that's what motivates me — I don't know why, but that's it."