A blaze at an Islamic boarding school in the Malaysian capital killed at least 23 people on Thursday, most of them teenage boys who cried for help from barred windows, officials and witnesses said.

The fire broke out at around 5.40 a.m. local time in a top-floor dormitory in the three-storey building, firefighters said, where most of the students were sleeping in bunk beds, with many of the windows covered by metal grills.

Two teachers were also killed in the fire at the Darul Quran Ittifaqiyah, a 15-minute drive from the iconic Petronas Twin Towers in Kuala Lumpur, police said. Most of the victims died from smoke inhalation.

The building was surrounded by metal grills that could not be opened from the inside.
– Soiman Jahid, firefighter

The disaster has renewed calls for greater scrutiny of so-called “tahfiz” schools, where students learn to memorize the Quran. They are unregulated by the education ministry, being the responsibility of the religious department.

Deputy Prime Minister Ahmad Zahid Hamidi said at least 31 fires had been reported at such schools in Malaysia since 2011, adding that they must follow safety regulations.

“We will continue to carry out investigations, especially through forensics, as we found that there was some security
features that should have been complied with but weren’t,” Zahid told reporters outside the school.

Fire department operations deputy director Soiman Jahid said officials were investigating the fire but it was likely caused by a short circuit or a mosquito repellent coil. The dormitory had only one entrance, leaving many of the victims trapped, he said. At least one window was unbarred. 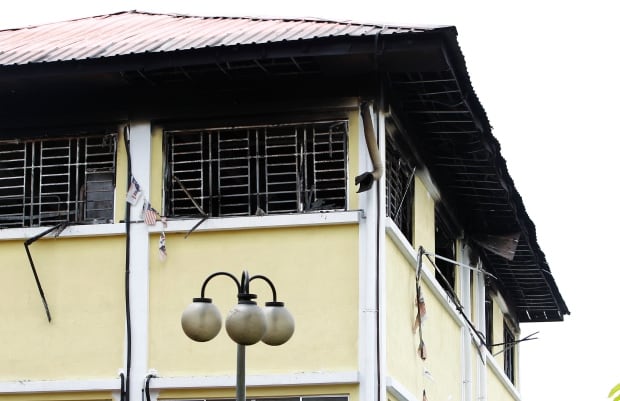 A view shows the metal grates that surrounded all but one window of the building. (Lai Seng Sin/Reuters)

“The building was surrounded by metal grills that could not be opened from the inside. The students, after realizing the fire and heavy smoke, tried to escape through the window,” Soiman said outside the school. “But because of the grills, they could not escape.”

Soiman said the school had submitted a request for fire safety approval but no new checks had been carried out as the request was still being processed.

“The pupils all got locked in and they couldn’t escape and got burnt,” Nadia Azalan, sister of a 13-year-old victim, told Reuters in tears as distraught family members gathered outside the building. “Safety should come first.”

A man identified only as Hazin, who lived next door to the school, said his son called the fire department after they heard screams and saw the flames.

“The children were crying for help, but I couldn’t help them as the door was already on fire,” he told Reuters. “I only managed to save a few of the kids who jumped out the window.”

Mohd Izzarudin Roslan, 15, said he had broken a window and climbed out on to a water pipe. Only eight of the boys managed to get out, he said.

“A few of my friends fell, there were some who had fire on their hair and clothes,” he said in a video posted online by the New Straits Times, an English-language daily.

Mohamad Arif Mawardi, 24, who was sleeping on one of the lower floors, said he realized there was a fire only after he heard people shouting.

“We wanted to help the others but we couldn’t because the fire was rampant. There was nothing we could do,” he said.

About 13 boys managed to open a window and escape, Arif said.

“Only those 13 who had access to that open window could escape,” he said.

Viewed from outside, the only tell-tale signs of disaster were the blackened upper-floor windows, otherwise the tin-roofed building appeared unscathed, with a Malaysian flag hanging limply from the yellow wall. Only inside did the intensity of the inferno become clear. The dormitory was blackened, lined with the charred frames of bunk beds.

Tahfiz schools have been under scrutiny since earlier this year when an 11-year-old boy died after reported abuse in Johor, north of Singapore.