Pope Francis issued a sweeping apology Sunday for the "crimes" of the Catholic Church in Ireland, saying church officials regularly didn't respond with compassion to the many abuses children and women suffered over the years.

But as Francis led a mass attended by more than 100,000 people in Dublin's Phoenix Park, elsewhere in the city victims of abuse were joined by activists and supporters to protest against the first papal visit to Ireland in almost 40 years.

They asked members of the public to stand in solidarity with them over what they call an attempt to silence and marginalize those the church harmed.

The demonstration held in the Irish capital's Garden of Remembrance was organized by Colm O'Gorman, a victim of clerical child abuse. Participants said they had urged people to book tickets for the papal visits in Ireland with the intention of not using them to create empty seats and lower attendance numbers.

Irish man says Catholic Church should "just pack up and leave us alone" 0:29

Meanwhile, hundreds of kilometres away, sombre protesters marched through the Irish town of Tuam and recited the names of an estimated 800 babies and young children who died at a Catholic Church-run orphanage there, most during the 1950s.

"Elizabeth Murphy, four months. Annie Tyne, three months. John Joseph Murphy, 10 months," the protesters said in memory of the children who were buried in an unmarked mass grave whose discovery was confirmed only last year.

Francis, who is on a weekend visit to Ireland, told the hundreds of thousands of people who turned out for Mass that he met Saturday with victims of all sorts of abuses: sexual and labour, as well as children wrenched from their unwed mothers and forcibly put up for adoption.

Responding to a plea from the adoptees, the pope assured their aging biological mothers that it wasn't a sin to go looking for the children they had lost. The women had been told for decades that it was.

"May the Lord keep this state of shame and compunction and give us strength so this never happens again, and that there is justice," he said. 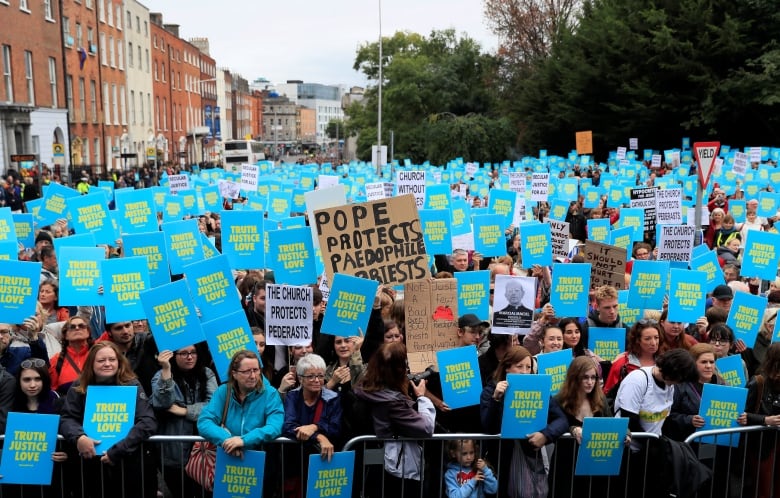 While Francis gave mass to over 100,000 faithful at Dublin's Phoenix Park, elsewhere in the city people protested what they called an attempt to silence and marginalize those the harmed by the Catholic Church. (Gonzalo Fuertes/Reuters)

Ireland has thousands of now-adult adoptees who were taken at birth from their mothers, who had been forced to live and work in laundries and other workhouses for "fallen women."

One forced adoptee, Clodagh Malone, said Francis was "shocked" at what the group that met with the pope told him and "he listened to each and every one of us with respect and compassion."

The survivors asked Francis to speak out Sunday to let all the mothers know that they did nothing wrong and that it wasn't a sin — as church officials had told them — to try to find their children later in life. 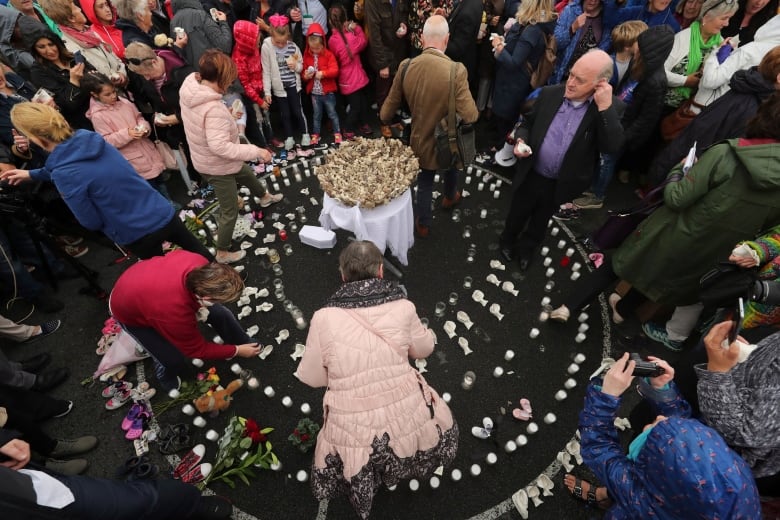 People gather clay baby shoes at the end of the protest at Tuam, the site of a mass grave of hundreds of babies who died at the church-run home. (Niall Carson/Associated Press)

They said the Argentine pope understood well their plight, given Argentina's own history of forced adoptions of children born to purported leftists during its 1970s military dictatorship.

"That is a big step forward for a lot of elderly women, particularly in the countryside in Ireland, who have lived 30, 40, 50, 60 years in fear," another adoptee, Paul Redmond, told The Associated Press. "That would mean a lot to them."

On Twitter, Irish Prime Minister Leo Varadkar also welcomed the pope's move, but stressed the need for the church to take action.

We welcome Pope Francis’s call for firm and decisive action and for forgiveness. We now ask that from words flow actions. We thank Pope Francis for his visit, and ask for his prayers. <a href="https://t.co/6cg2YKh6Pr">pic.twitter.com/6cg2YKh6Pr</a>

Francis' first day in Ireland was dominated by the abuse scandal and Ireland's fraught history of atrocities committed in the name of purifying the Catholic faith. He received a lukewarm reception on the streets, but tens of thousands of people thronged Dublin's Croke Park Stadium on Saturday night for a family rally featuring Ireland's famous Riverdance performers and tenor Andrea Boccelli.

The abuse scandal has devastated the church's reputation in Ireland since the 1990s and has exploded anew in the United States.

The letter attributed to Archbishop Carlo Maria Vigano accused Vatican officials of knowing about the sexual escapades of ex-Cardinal Theodore McCarrick since 2000 but making him a cardinal anyway. Francis accepted McCarrick's resignation as cardinal last month after a U.S. church investigation determined an accusation he molested a minor was "credible."

In the letter, Vigano said McCarrick initially was sanctioned by the Vatican in 2009 or 2010, but that Francis rehabilitated him in 2013 despite being informed of McCarrick's penchant to invite young seminarians into his bed.

In Tuam, meanwhile, survivors of the Bon Secours Mother and Baby Home lit candles and placed hundreds of pairs of tiny shoes around a tiny white coffin at the site near a sewage area on the home's former grounds where the babies and children were buried.

Irish government-appointed investigators reported last year that DNA analysis of selected remains confirmed the ages of the dead ranged from 35 weeks to three years old and were buried chiefly in the 1950s. The Tuam home closed in 1961.