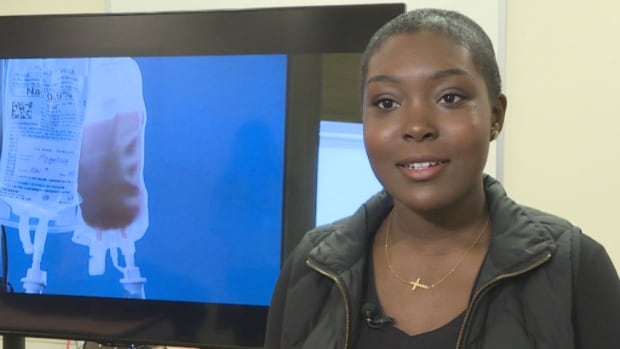 An Alberta woman is the first adult in Canada to be cured of sickle cell anemia with the help of a sister’s love — and a stem cell transplant.

Revée Agyepong, 26, of Edmonton was diagnosed with the disease as a toddler and has never known life without it.

“I remember as far back as elementary feeling sickle cell complications and not knowing what it was,” she said.

“I thought that everyone would go out for recess and play, then come back with a terrible headache and body pain, couldn’t breathe … eventually I realized it was just me.”

Sickle cell anemia is a genetic disease in which red blood cells change into a semi-circular shape and block blood vessels. Symptoms vary from patient to patient but it puts every organ in the body at risk.

Agyepong said when she found out about the success of the treatment in pediatric patients, she was at a point where her health was declining and she was running out of treatment options, but doctors told her she was too old to undergo the procedure.

According to Alberta Health Services, the older the patient and donor in bone marrow transplants, the greater the risk of graft versus host disease, which is a type of immune rejection that can have serious health repercussions and can even result in death.

But Stephanie Amoah, Agyepong’s older sister, said she could no longer watch her sister struggle in constant pain and started to research which other centres were testing the treatment on adult patients.

“My sister has always been my protector, my guardian, she found a way,” Agyepong said.

The sisters approached Agyepong’s doctors and told them of the treatment going on in the east coast of the United States. Dr. Andrew Daly, who leads Alberta’s bone marrow transplant program and oversaw Agyepong’s stem cell transplant, said they had coincidentally been thinking about conducting adult stem cell transplants for sickle cell disease.

“My persistence, my sister’s persistence, and they said my dedication to wanting a cure, was enough for them to just say, you know what, she’s going to be the person, let’s do this,” Agyepong said.

Stephanie Amoah, Revée Agyepong’s older sister, was a 100% donor match. She said she’s happy to have been part of a process that will give her sister a new life.(Nelly Alberola/Radio-Canada)

Amoah was tested and was found to be a 100 per cent match for her sister. Daly said the odds of siblings being a perfect match is one in four.

The transplant, which took place at Calgary’s Tom Baker Cancer Centre, involved Agyepong taking drugs to suppress her immune system and doing a course of low-dose radiation. Amoah underwent a process called apheresis that collected her sickle-cell-free stem cells, which were then given to Agyepong.

‘Do the things she’s always wanted’

“Over the past few months, what we’ve seen is that Revée’s sister’s bone marrow has taken over the production of Revée’s red blood cells,” Daly said. “The amount of sickle cell hemoglobin in her bloodstream has decreased almost to zero.”

Today, Agyepong’s blood tests don’t show any signs of the disease, which makes her essentially cured. Amoah said the change she sees in her sister is amazing.

“It’s phenomenal. I’m just so happy to have been part of a process that will give her a new life, a new hope and be able to do the things she’s always wanted to do,” Amoah said.

Agyepong said she is still recovering from the transplant but when she is one year out, she plans to dedicate her time to advocating for the disease, and just live her life like a normal person.

“I want to travel somewhere exotic and somewhere warm and feel dehydration like anyone else would, because I couldn’t with sickle cell, I would be dehydrated and end up in the hospital,” she said.

“It sounds so insignificant but it’s really exciting just to be able to be more spontaneous.”