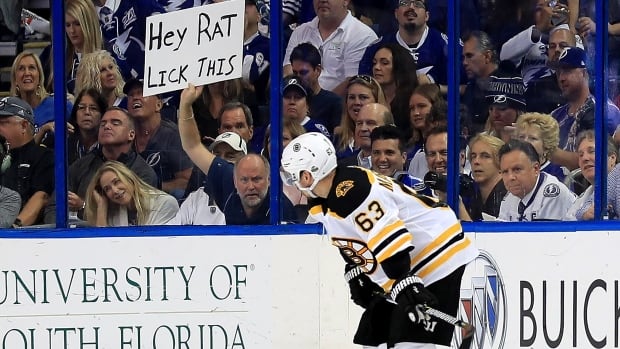 As Brad Marchand continues tongue lashing his opponents, his latest victim says it’s time the Bruins agitator was penalized for his actions.

And the NHL seems to agree.

On Saturday, the NHL’s deputy commissioner Bill Daly said the league will tell the Bruins that Marchand’s face-licking antics must stop.

“Yes, we will be communicating with the club. We don’t expect it to happen again,” he told ESPN in an email.

The league confirmed via Twitter that they spoke the Bruins GM Don Sweeney, as well as Marchand, about the incidents and that supplemental discipline will be handed out if it happens again.

NHL’s Colin Campbell spoke with Boston’s Brad Marchand and GM Don Sweeney today. The League put the player on notice that his actions last night are unacceptable and similar behavior in the future will be dealt with by way of supplemental discipline.

Callahan says it’s worse, if not the same, as spitting

Ryan Callahan was the latest player to have his face licked by Marchand, during the Tampa Bay Lightning’s 4-3 overtime win in Game 4 in Boston on Friday.

“It’s unfortunate that he goes that low to do that, but doesn’t take us off our game,” Callahan said. “Hopefully, the league looks at it. I don’t know if there is discipline for spitting in someone’s face, but to me it’s worse, if not the same.”

Marchand got up close and personal with Callahan after a whistle with 1:21 left in the second period, then leaned in and tried to lick Callahan’s face. The Lightning forward pushed him away.

“He punched me four times in the face,” Marchand said. “He just kept getting close. Nothing big.”

The Toronto Maple Leafs also complained about the tactic during their first-round series with Boston.

Told that Callahan compared licking to spitting and said it should be penalized accordingly, Marchand said, “That’s cute. Good for him.”

Oddly enough, Callahan was asked before the series began what he would do if something like this happened.

“I don’t know, I guess we’ll see if he licks me,” Callahan said.

After the game, Lightning coach Jon Cooper expressed his frustration with the incident, telling reporters there is “no place in our game for that.”

Jon Cooper on lick-gate: “There is absolutely no place in our game for that. I don’t get it. I don’t understand it. I don’t. How would you feel if I walked over to your right now and gave you one big lick from the chin up?”