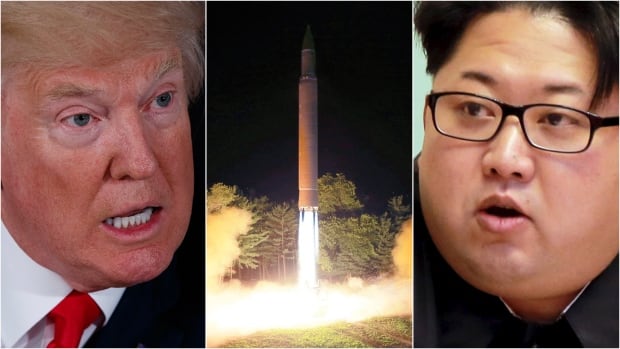 No more nuclear tests. A suspension of missile launches. The closing of a nuclear test site at the base of a mountain that’s reportedly near collapse.

As far as the North Korean regime’s nuclear concessions go, this is the least the government could do, according to non-proliferation experts. What the concessions don’t amount to, North Korea observers say, is what U.S. President Donald Trump claimed over the weekend — an agreement from Kim Jong-un to pursue a remarkable offer of complete “denuclearization.”

To Western powers, denuclearization would mean nothing short of a complete and irreversible dismantling of the North’s nuclear program. Conventional wisdom says that won’t happen, as a nuclear deterrent is viewed as vital to the regime’s survival, described in propaganda over the weekend as a “treasured sword.”

To Pyongyang, though, denuclearization is interpreted as applying to the entire Korean Peninsula, including the withdrawal of American troops from South Korea and the removal of the U.S. “nuclear umbrella” alliance with Seoul.

All of which is to say denuclearization is a complicated matter yet to be hammered out before a historic face-to-face between Trump and the North Korean ruler set to happen by June.

Although Pyongyang’s offers don’t align completely with U.S. interests, they’re still arguably progress — and that makes the Trump-Kim summit worthwhile to scholars like Melissa Hanham, a proliferation researcher with the Middlebury Institute of International Studies at Monterey.

“North Korea has conceded the easiest things for them to concede, and they’re doing it for the photo op,” she said. “But I don’t want to take away the fact that this is a positive sign, no matter how you cut this up.”

Prestige and recognition on the world stage as a true nuclear power would be prized by the regime. On Sunday, NBC News host Chuck Todd characterized the granting of a meeting with Kim as a “huge gift” to an isolated nation aching to be legitimized abroad. Trump, taking issue with the idea he was being played, hit back on Twitter:

Sleepy Eyes Chuck Todd of Fake News NBC just stated that we have given up so much in our negotiations with North Korea, and they have given up nothing. Wow, we haven’t given up anything &amp; they have agreed to denuclearization (so great for World), site closure, &amp; no more testing!

Cynics have good reason to be wary of Kim’s intentions, given an established diplomatic pattern of coming to the bargaining table, extracting concessions, then reneging on the deal.

A photo of a smiling Trump shaking hands with Kim would be “the crown jewel” for the North’s propaganda machine, said Harry Kazianis, director of defence studies at the conservative Center for the National Interest.

It would be a “defining moment” for Kim’s rule — one that Kazianis said would “show that the regime went toe-to-toe with the great imperialists who destroyed their country decades ago.”

While former state department official Mintaro Oba said he has no doubt the U.S. president agreeing to meet with the North Korean leader is a “victory” for the North, the idea it’s a substantive concession is overstated, he said.

“This is North Korea manipulating the public narrative,” he said. “The suspension of nuclear tests and ICBM tests is a welcome step that certainly helps reduce tension, but it’s a step, not a leap. And it’s a step that could be easily reversed.”

“They’ve had six nuclear tests, and so have Pakistan and India, for example. So they may feel they have enough advancement, having tested later than those countries, and benefited from the advancements in technology to help them build those weapons.”

A capable nuclear weapon to Kim is likely anything that serves as a deterrent, regardless of whether its accuracy has been perfected, Kazianis said. The North has already demonstrated it can strike anywhere within the continental U.S.

“They don’t need to land a nuclear weapon right in the windows of the White House,” he said.

It’s debatable whether promising to close the Punggye-ri nuclear facility at the base of Mount Mantap is also an offer of damaged goods, as the mountain is reportedly on the verge of collapse after six nuclear tests.

“Other nuclear powers have stopped at six tests. India and Pakistan both had six tests, so they don’t need to keep blowing up nuclear weapons to know they work,” Kazianis said. “You can model this through computer systems.”

Kim, quoted by North Korean state media, said the Punggye-ri facility has “completed its mission” and that “under the proven condition of complete nuclear weapons, we no longer need any nuclear tests, mid-range and intercontinental ballistic rocket tests.”

It seems, then, that Kim has little to lose. But there are still domestic concerns. Biting sanctions, which the North’s trading partner, China, signed onto, have impeded Kim’s two-pronged vision of “pyongjin” — the parallel pursuits of nuclear arms and economic development.

It’s unlikely Kim would forgo one pursuit for the other, but economic modernization is widely seen as one of an increasingly confident Kim’s ultimate goals for stepping out onto the world stage. Blazing a new economic path will require the lifting of sanctions.

Former state department analyst Stephen Noerper, director of the Korea Society at Columbia University, believes there’s an opportunity that should be seized upon.

If Kim is truly trying to portray himself as a younger and more flexible leader, and if a pathway to economic modernization means an opening to the outside world, “we shouldn’t give up on that, because to bring someone in from the cold would be a remarkable accomplishment,” Noerper said.

Kim’s concessions so far are a start.

“It’s easy to say it’s better than nothing, and I realize that’s a low standard,” said former state department nuclear negotiator Robert Gallucci, who helped to broker the 1994 framework with North Korea. “But I’d rather them be making these gestures than no gestures.”

Gallucci said it’s “nonsense” to consider it a reward if the U.S. starts talking with rival nations.

That Kim and his South Korean counterpart, Moon Jae-in, are preparing to meet gives him cautious optimism. It’s far from the “fire and fury” rhetoric of last summer, when Guam was being threatened by missiles.

“We were on the edge of what could have been a military strike with ballistics. Now we’re on the edge of two summits,” Gallucci said. “I like B better than A. So let ’em talk, and let’s find out what the deal might be.”