The statement also emphasized the importance of North Korea beginning to “denuclearize” the Korean peninsula.

North Korea conducted its longest-ever test flight of a ballistic missile earlier in the day, sending an intermediate-range weapon over Japan and into the northern Pacific Ocean in a launch that signals both defiance of its rivals and a big technological advance.

The Security Council’s emergency session comes just four days after it unanimously approved its toughest sanctions yet on North Korea over its nuclear tests.

Russia’s UN envoy said following the meeting that North Korea and other countries should halt mutual threats and engage in meaningful negotiations.

“There is a military option, it’s not what we prefer to do,” he added. 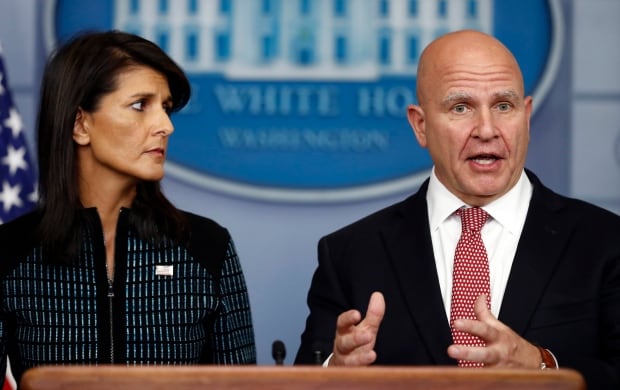 National security adviser H.R. McMaster, right, and U.S. Ambassador to the UN Nikki Haley, participate in a news briefing at the White House, in Washington on Friday. (Carolyn Kaster/Associated Press)

Trump will lead a U.S. delegation to the UN General Assembly on Monday and three days later will have a working lunch with the leaders of South Korea and Japan.

Nikki Haley, U.S. ambassador to the UN, said “North Korea will be front and centre” next week in New York and that the U.S. will continue to “push through as many diplomatic channels as we have.”

She defended the sanctions agreed to at the UN this week on and on Aug. 6, saying they’re starting to take effect in North Korea, but that it will take more time for the country to feel the full impact of dramatic drops in exports and oil imports the sanctions targeted.

McMaster welcomed the fact that there was a “consensus among all key nations” about the need for a denuclearized Korean Peninsula, but said reinforcing the sanctions will be key.

South Korea’s joint chiefs of staff said the latest missile travelled about 3,700 kilometres and reached a maximum height of 770 kilometres. Guam, which is the home of important U.S. military assets, is 3,400 kilometres away from North Korea.

North Korea’s weapons tests demonstrate that it can “turn the American empire into a sea in flames through sudden surprise attack from any region and area,” North Korea’s Rodong Sinmun newspaper said Friday, without mentioning the latest missile test. 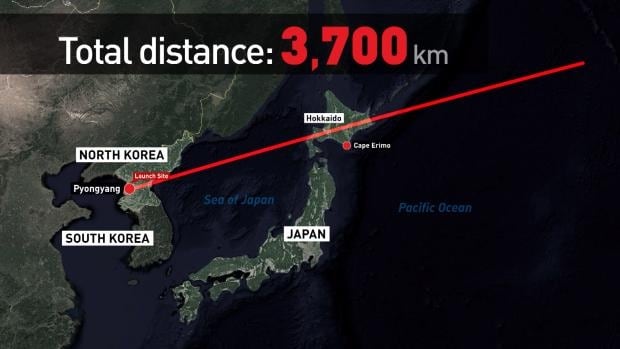 “The sanctions and pressure by the international community will only tighten so that North Korea has no choice but to take the path for genuine dialogue” for nuclear disarmament, Moon said.

“If North Korea provokes us or our allies, we have the strength to smash the attempt at an early stage and inflict a level of damage it would be impossible to recover from.”

Friday’s test, which Seoul said was the 19th launch of a ballistic missile by North Korea this year, triggered sirens and warning messages in northern Japan but caused no apparent damage to aircraft or ships. It was the second missile fired over Japan in less than a month.

The missile was launched from Sunan, the location of Pyongyang’s international airport and the origin of the earlier missile that flew over Japan.

Analysts have speculated the new test was of the same intermediate-range missile launched in that earlier flight, the Hwasong-12, and was meant to show Washington that North Korea can hit Guam if it chose to do so.

Such early generation missiles are often inaccurate because of guidance and control errors during the boost and re-entry phases as the warhead passes through the atmosphere late in flight, Wright said.

South Korea detected North Korean launch preparations Thursday, and Moon ordered a live-fire ballistic missile drill if the launch happened. This allowed Seoul to fire its missiles only six minutes after the North’s launch Friday. One of the two missiles hit a sea target about 250 kilometres away, which was approximately the distance to Pyongyang’s Sunan, but the other failed in flight shortly after launch, South Korea’s joint chiefs of staff said. 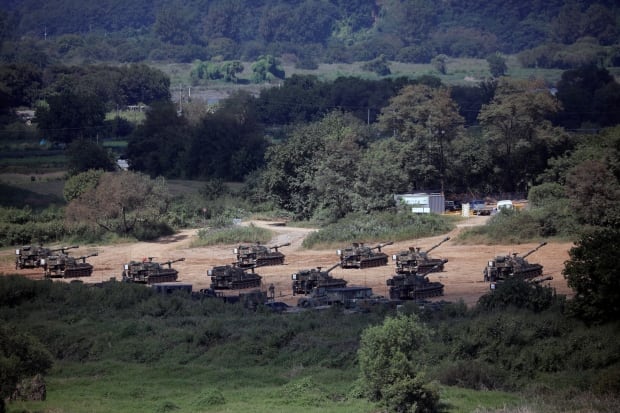 North Korea initially flight-tested the Hwasong-12 and the ICBM model Hwasong-14 at highly lofted angles to reduce their range and avoid neighbouring countries.

The two launches over Japan indicate North Korea is moving toward using angles close to operational to determine whether its warheads can survive the harsh conditions of atmospheric re-entry and detonate properly.

North Korea’s August launch over Japan came weeks after it threatened to fire a salvo of Hwasong-12s toward Guam and bracket the island with “enveloping” missile fire.

North Korea has been accelerating its nuclear weapons development under leader Kim Jong-un, a third-generation dictator who has conducted four of North Korea’s six nuclear tests since taking power in 2011. The weapons being tested include hard-to-detect solid-fuel missiles designed to be launched from road mobile launchers or submarines.

They also prohibit North Korea from importing all natural gas liquids and condensates, and cap its imports of crude oil and refined petroleum products.

The growing frequency, power and confidence displayed by these tests seem to confirm what governments and outside experts have long feared: North Korea is closer than ever to its goal of building a military arsenal that can viably target both U.S. troops in Asia and the U.S. homeland. 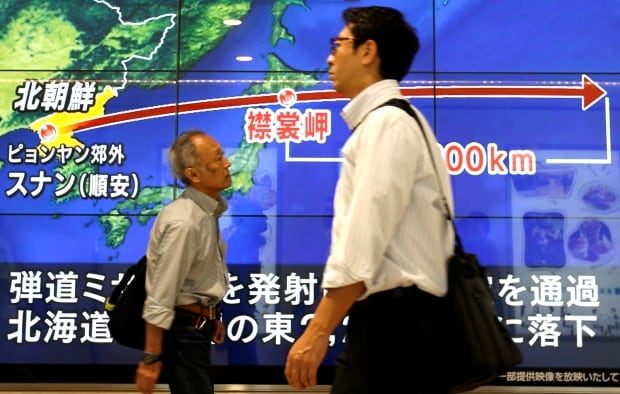 Passersby walk in front of a TV screen reporting news about North Korea’s missile launch in Tokyo on Friday. It was the second test in weeks to fly over Japan. (Issel Kato/Reuters)

This, in turn, is meant to allow North Korea greater military freedom in the region by raising doubts in Seoul and Tokyo that Washington would risk the annihilation of a U.S. city to protect its Asian allies.

North Korea has repeatedly vowed to continue its weapons tests amid what it calls U.S. hostility — by which it means the presence of nearly 80,000 U.S. troops stationed in Japan and South Korea.

Robust international diplomacy on the issue has been stalled for years, and there’s so far little sign that senior officials from North Korea and the U.S. might sit down to discuss ways to slow the North’s determined march toward inclusion among the world’s nuclear weapons powers, despite calls from the UN and foreign powers to negotiate.