U.S. President Donald Trump on Tuesday will call the families of four soldiers killed this month in Niger, the White House says, as Trump again casts doubt on whether his predecessor appropriately consoled the families of military personnel who died in war.

Trump suggested Tuesday that in 2010 President Barack Obama did not call John Kelly, a former marine general who is now White House chief of staff, when his son, marine 2nd Lt. Robert Kelly, was killed in Afghanistan.

“I think I’ve called every family of someone who’s died,” Trump told Fox News radio. “As far as other representatives, I don’t know. You could ask Gen. Kelly, did he get a call from Obama?”

A White House official later said that Obama did not call Kelly, but did not immediately respond to questions about whether the former president reached out in some other fashion.

In fact, White House visitor records show Kelly attended a breakfast Obama hosted for Gold Star families six months after his son died. A person familiar with the breakfast — speaking on condition of anonymity because the event was private — said the Kelly family sat at Michelle Obama’s table.

Obama aides said it was difficult this many years later to determine if he had also called Kelly, and when.

But former Obama spokesperson Ned Price reacted angrily to Trump’s comments. “Kelly, a man of honour & decency, should stop this inane cruelty,” Price tweeted. “He saw up-close just how — & how much — Obama cared for the fallen’s families.”

Trump had said in a news conference Monday he had written letters to the families of four soldiers killed in the Niger ambush and planned to call them, crediting himself with taking extra steps in honouring the dead properly. “Most of them didn’t make calls,” he said of his predecessors. He said it’s possible that Obama “did sometimes,” but “other presidents did not call.” 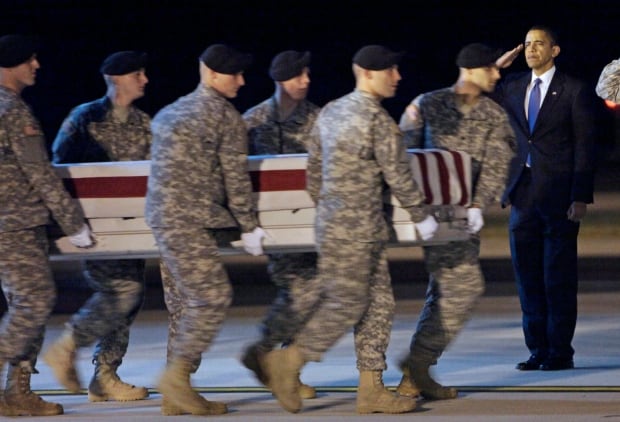 President Barack Obama salutes as the transfer case containing the remains of Sgt. Dale R. Griffin are carried during a casualty return at Dover Air Force Base in Delaware, on Oct. 29, 2009. President Donald Trump is claiming his predecessors did not sufficiently honour the nation’s fallen. (Pablo Martinez Monsivais/Associated Press)

The record is plain that presidents reached out to families of the dead and to the wounded, often with their presence as well as by letter and phone. The path to Walter Reed National Military Medical Center and other military hospitals, as well as to the Dover Air Force Base in Delaware, where the remains of fallen soldiers are often brought, was a familiar one to Obama, George W. Bush and others.

Bush, even at the height of two wars, “wrote all the families of the fallen,” said Freddy Ford, spokesperson for the former president. Ford said Bush also called or met “hundreds, if not thousands” of family members of the war dead.

‘I think I’ve called every family of someone who’s died. As far as other representatives, I don’t know. You could ask Gen. Kelly, did he get a call from Obama?’– U.S. President Donald Trump

Judy Parker lost a son, army Specialist William Evans, 22, in a roadside bomb in Iraq in 2005 and said the first time she saw her younger son cry over his brother’s death was in Bush’s arms.

“He took my son who was just 21 and held him and let him cry,” she said. Bush “said he didn’t know what he would do if it was his child.”

The soldier was from Hallstead, Pa. Bush came to the Fort Indiantown Gap Army post in northeastern Pennsylvania shortly after her son’s death, to meet her family and the families of the other guard members killed that month.

Parker, who now lives in Chenango Forks, N.Y., said she voted for Trump and wishes he would quit tweeting “and get to work.”

Altogether some 6,900 Americans have been killed in overseas wars since the Sept. 11, 2001, attacks, the overwhelming majority under Bush and Obama. Since Trump took office in January, about two dozen U.S. service members have been killed.

The White House said letters would go out and calls would be made to the families of the slain soldiers in Niger on Tuesday. The family of Staff Sgt. Dustin Wright, one of the soldiers, was told by an army casualty assistance officer to expect a phone call from Trump by Tuesday evening, said Will Wright, the soldier’s brother.

“He asked if the family would like to be contacted and if we’d be available to speak with the president,” Will Wright said from Lyons, Ga., where funeral services for his brother were held Sunday. “My mother and father said yes.”

The soldier’s family in rural southeast Georgia has received “immeasurable support from the administration” and the military since he was killed Oct. 4, Will Wright said. He added that it would be “a great honour” to hear from Trump personally.

Trump addressed the matter when asked why he had not spoken about the four soldiers killed in Niger. They died when militants thought to be affiliated with ISIS ambushed them while they were patrolling in unarmoured trucks with Nigerien troops.

“I actually wrote letters individually to the soldiers we’re talking about, and they’re going to be going out either today or tomorrow,” he said, meaning he wrote to the families of the fallen soldiers.

“If you look at President Obama and other presidents, most of them didn’t make calls,” Trump said.

Press Secretary Sarah Huckabee Sanders said later that Trump “wasn’t criticizing predecessors, but stating a fact.” She said that presidents didn’t always call families of those killed in battle: “Sometimes they call, sometimes they send a letter, other times they have the opportunity to meet family members in person.”

Bush’s commitment to writing to all military families of the dead and to reaching out by phone or meeting with many others came despite the size of the task. In the Iraq war alone, U.S. combat deaths were highest during his presidency, exceeding 800 each year from 2004 through 2007. Bush once said he felt the appropriate way to show his respect was to meet family members in private.

Obama declared an end to combat operations in Iraq in August 2010, and the last U.S. troops were withdrawn in December 2011. As Obama wound down that war, he sent tens of thousands more troops into Afghanistan in 2009 and 2010, and the death count mounted. From a total of 155 Americans killed in Afghanistan in 2008, which was Bush’s last full year in office, the number jumped to 311 in 2009 and peaked the next year at 498. In all, more than 1,700 died in Afghanistan on Obama’s watch.

Trump visited Dover early in his presidency, going in February with his daughter Ivanka for the return of the remains of a U.S. Navy SEAL killed during a raid in Yemen, William (Ryan) Owens.

“No doubt in my mind that President Obama suffered when people died on his watch,” he said.

A prototype “pen” technology aims to give cancer surgeons a better sense of whether they’ve removed all of a tumour while in the operating room.

The new approach strives to answer a patient’s question after surgeons remove a tumour: “Did you get it all?”

To say yes confidently, doctors often send a sample of the tissue in question to a pathologist to freeze, check and test under a microscope. It’s the gold standard for accuracy, but takes at least 30 minutes per sample. As the clock ticks, the patient remains under anesthesia.

Cancer surgeons estimate that in up to 20 per cent of some operations, traces of tumour remain at the margin or edges of where they’ve cut, which can lead to repeated surgeries or recurrence of cancer.

In this week’s issue of the journal Science Translational Medicine, U.S. researchers describe an experimental pen-like tool for surgeons that quickly draws samples through a tube to test for traces of cancerous tissue in the OR, with results within 10 seconds.

The technology could achieve the goals of more precise, quicker and safer surgery, said study co-author Dr. James Suliburk, chief of endocrine surgery at Baylor College of Medicine in Houston.

“It allows us in real time to test tissue from the operative field as we actually operate and ensure that we’ve resected the tumour to appropriate surgical margins,” Suliburk said.

In a series of experiments, investigators in Texas tested the pen-sized prototype tip that’s connected to a conventional mass spectrometer, which varies from the size of a laser printer to a fridge.

In validation tests on samples taken from 253 people with known lung, ovary, thyroid or breast tumours from a tissue bank, the device was 96 per cent accurate in identifying cancers, the team said.

The researchers also used what they call the “MasSpec Pen” to reliably identify breast tumours in mice. They hope to use it in surgery on human patients early in 2018 followed by clinical trials.

“Usually we take small step forwards and along the way we take several steps back,” Suliburk said. “Because of our multidisciplinary research team … we’ve been able to take giant leaps forward with only small steps backwards. And that’s something that in modern-day medical research seldom happens.”

Suliburk envisions the technology eliminating the need to send out tissue to be analyzed under the microscope. 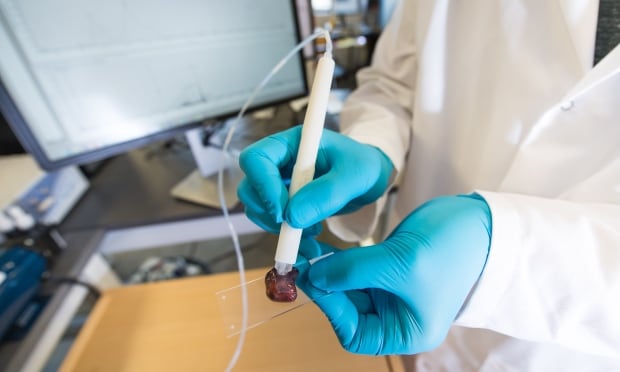 Livia Schiavinato Eberlin, an assistant professor of chemistry at the University of Texas at Austin, envisioned the technology. Co-author and campus colleague Thomas Milner, a professor of biomedical engineering, worked with her team to put together a prototype that could be held against a patient’s tissue.

It’s biocompatible, since it just takes water deposits from the surface of the tissue. Then samples are transported through special tubing to the mass spectrometer, said Milner.

Next, machine learning software analyzes the “fingerprint” of metabolites from the sample to find predictably higher concentrations within a tumour. In seconds, the surgical team sees the final result on a screen displaying “cancer” or “normal.”

“Because the imaging and tools are so good, these treatments can be done predictably and reliably,” Milner said.

There’s a whole fleet of similar technologies coming to the operating room. For instance, the iKnife and its accompanying mass spectrometer samples the sharp-smelling smoke that rises when surgeons heat tissue as they cut. Other experimental modes are based on ultrasound or light.

Conventional pathology will remain paramount until it’s proven that the molecular fingerprint from samples taken from next to a tumour are truly a cancerous cell, cautioned Dr. John Rudan, head of surgery at Queen’s University in Kingston, Ont. He was not involved in the study.

“How does the clinician react to that area that happens to light up in the tissue adjacent to where you think the tumour is? We don’t know what the answer is going to be yet. It’s going to take a while for us to actually understand that.”

Rudan sees how the MasSpec Pen could help surgeons to determine if surgical margins are clear. He’s also aware of limitations on what it could accomplish. For instance, tumours are three-dimensional and need to be scanned all over, yet the tool itself lacks depth perception.

“I see this as a very interesting type of technology that will probably have a place in surgical oncology,” said Rudan, who holds the university’s Britton Smith Chair in surgery.

At Queen’s, Rudan and his colleagues are using an image-guided tool on frozen breast cancer specimens. Part of the challenge is that breast tissue moves between the time when it’s sampled, removed and analyzed. Without tracking technologies, surgeons can be working blind when they return to a particular spot.

The MasSpec Pen prototype hasn’t been used in a real surgery. It could take years to determine if it’s valid, cost-effective and ultimately improves survival rates.