​The tone was set in the parking lot when an SUV flying twin "I Heart Trump" flags rumbled past with a sign in the back window bearing the words, "CNN sucks."

Inside, as at any Donald Trump political rally, one could observe the combustible mix of adoration for the U.S. president and loathing for the media assembled in a fenced-in media pen. 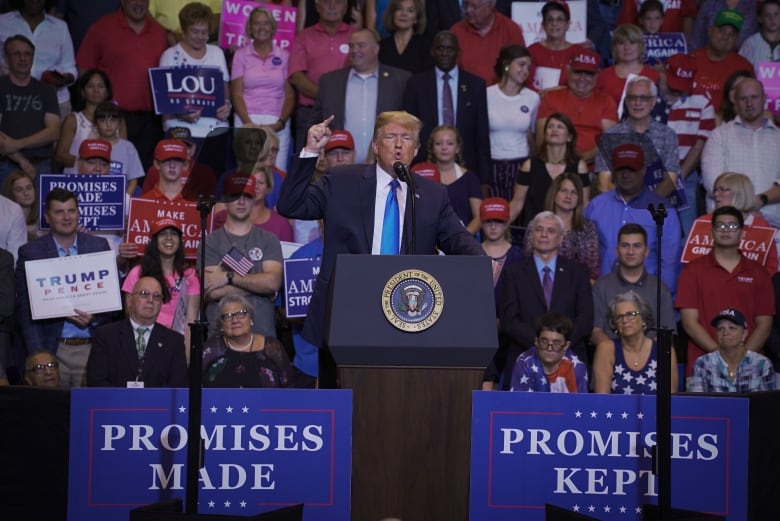 U.S. President Donald Trump speaks at a 'Make America Great Again' rally in Wilkes-Barre, Pa. The township is part of a formerly Democratic county that Trump carried by 23 points in the 2016 election. (Jean-Francois Benoit/CBC)

Thursday's packed event at Wilkes-Barre's 10,000-capacity Mohegan Sun Arena was no different, in this old manufacturing town nestled in the Pocono Mountains of northeastern Pennsylvania.

It was the latest stop in a series of campaign rallies Trump has been holding to drum up support for Republican candidates in the coming midterm elections. In Pennsylvania, Republicans are trying to snag a Senate seat from two-term incumbent Bob Casey, a Democrat.

One moment, there were expressions of devotion for Trump ("We love you, Donald!") and appreciative laughter as he made cracks at familiar targets: the Democrats, Hillary Clinton, Bernie Sanders.

Then the mood would darken as the jacked-up crowd turned toward the journalists whose job it is to cover him, listening as the man holding the highest elected office in the land denigrated them as "disgusting."

Middle fingers flew. Someone walked by the media workspaces fluttering a "CNN sucks" banner (the network is a favourite media target of the president). From their workspaces ringed by Trump supporters, members of the Washington press corps said they saw an attack on the news outlet as a swipe at their collective, constitutionally protected rights as a free press.

"There is real concern" of an undercurrent of violence surfacing, said a well-known Capitol Hill correspondent at a major U.S. national news broadcaster. She was not permitted by her network to comment on the matter but said "a mob mentality" at rallies like this, egged on by the president is disturbing.

"And it's been getting worse."

The mood has arguably been fuelled by the president, who on Thursday night railed against the "fake, fake, disgusting media" to a chorus of boos:

U.S. President Donald Trump continues to air his grievances against the press at a Pennsylvania rally. 0:08

There are also signs that there is more than a bit of showmanship to some of the heckling.

When CNN reporter Jim Acosta was subjected to a torrent of profanities and middle fingers during a Trump rally in Tampa on Tuesday, he finished his work. After the cameras were off, he reportedly posed for selfies with members of the same crowd that had unloaded their rage on him just moments earlier.

But Trump has also in recent days resurrected what might be his most troubling attack on the press, labelling them "the enemy of the people," a phrase he first used in a tweet in February 2017 and a favourite label for opponents of notorious dictators such as Joseph Stalin.

New York Times publisher A.G. Sulzberger revealed last week he was invited to the Oval Office to speak with Trump, using the occasion to raise concerns that anti-press rhetoric — especially "enemy of the people" — might encourage violence.

The phrase didn't bother Dan Berenato, 20, wearing an "FNN — Fake News Network" T-shirt in the Pennsylvania crowd. He doesn't consume much news media, aside from Fox News, mostly because he can't trust other mainstream outlets.

"It's the enemy of the people because people may not necessarily know how to consume the media," he said. "They may not know whether the media's actually lying to them."' 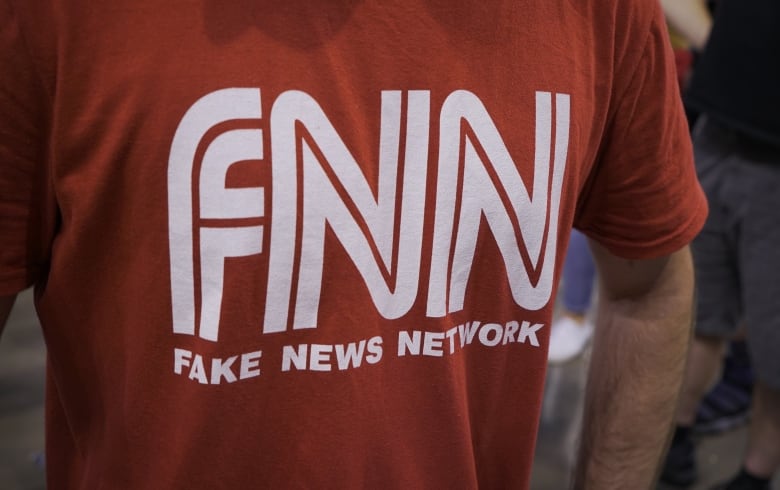 A Trump rally attendee in Pennsylvania sports an 'FNN Fake News Network' T-shirt. President Trump has increased his anti-press rhetoric in recent weeks, after reviving his attack on the media as the 'enemy of the people.' The phrase has alarmed some journalists, who fear it could lead to violence and threats against members of the press. (Jean-Francois Benoit/CBC)

Berenato was among those shaking his fist and booing at the reporters  assembled  behind him when the president referenced "fake news." It was like a call-and-response game.

Some journalists have private security details

Fun for Trump's base, maybe — but it's dangerous for the First Amendment, journalism advocacy groups say.

"I divide the world into pre-February 2017 and post-February 2017, which of course is when the president referred to us as enemies of the people," said Olivier Knox, president of the White House Correspondents' Association.

Some high-profile journalists covering this presidency have had to hire private security details, he said. 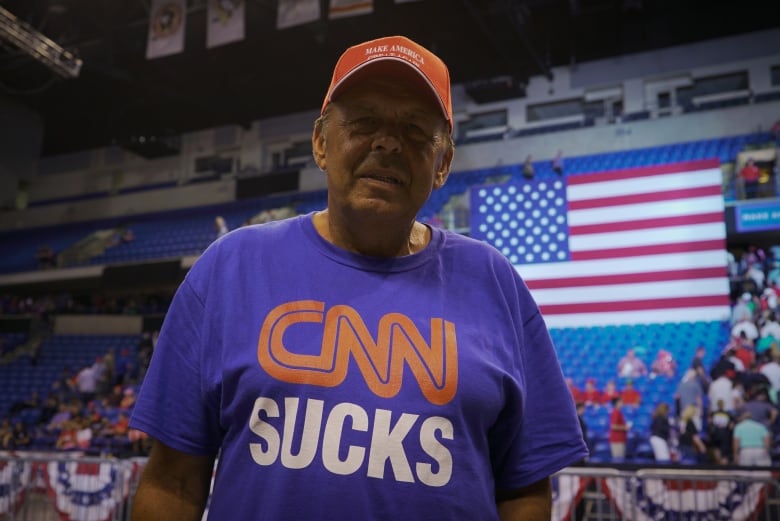 John Topczewski, a supporter of U.S. President Donald Trump at a rally in Wilkes-Barre, Pa., says he only watches 'real news,' which he defined solely as 'Fox News.' (Jean-Francois Benoit/CBC)

"A number of my colleagues have received — and continue to receive — specific and rather credible-looking threats of violence."

Wearing a Trump-Pence 2020 shirt, Jim Sabol, 47, wasn't buying it. If anyone was inciting violence, he said, it was the news media, which he blamed for reporting negatively on the president in order "to create havoc."

"They're inciting the people," he said of reporters. "So that, to me, is an enemy."

He never watches CNN, nor would he flip to any of the major American news networks, save for Fox. When he listens to radio, it's tuned to the conservative firebrand Rush Limbaugh.

'Whatever happened to honest reporting?'

Behind him, Trump continued to hold court.

"Whatever happened to honest reporting?" the president asked, accusing the media of "making up stories." 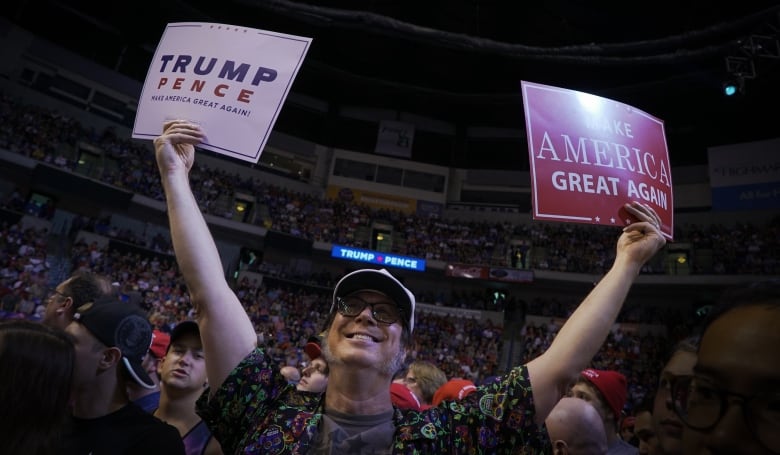 Trump supporter Edward Young hoists signs at a political rally in the former manufacturing community of Wilkes-Barrie, Pa. About 10,000 people were expected to be in attendance. (Jean-Francois Benoit/CBC)

"Fake news!" bellowed a heavyset man in a Trump 45 football jersey, turning toward the reporters.

And on it went.

"They can make anything bad," Trump said later, gesturing at the reporters.

"They're liars! They twist everything!" screamed a woman sitting directly behind the press pen. 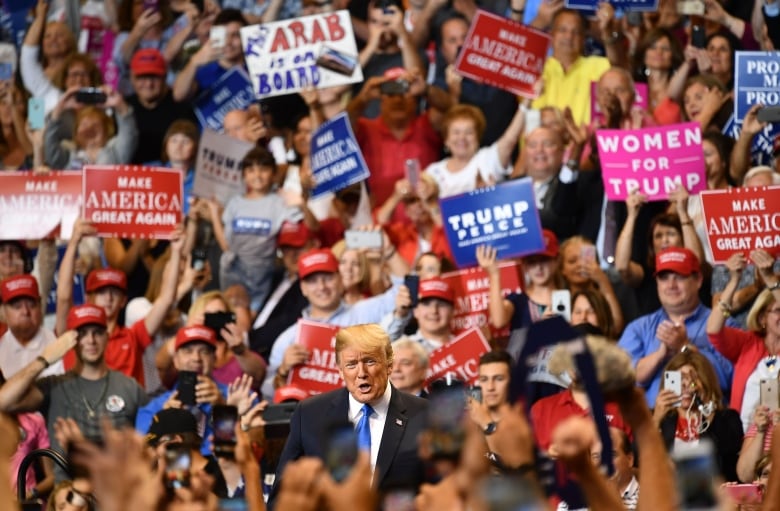 Hours earlier, the same woman smiled and shook hands with CBC News, saying she held no ill will toward journalists but only wanted the president to be treated fairly "for the good that he's done," such as bringing manufacturing jobs back to Pennsylvania.

Now, she was shouting "CNN sucks! CNN sucks!" with the crowd.

She glanced back toward the press pen and, with a look of recognition, shrugged and mouthed a quick apology to a reporter.

And then she kept chanting.