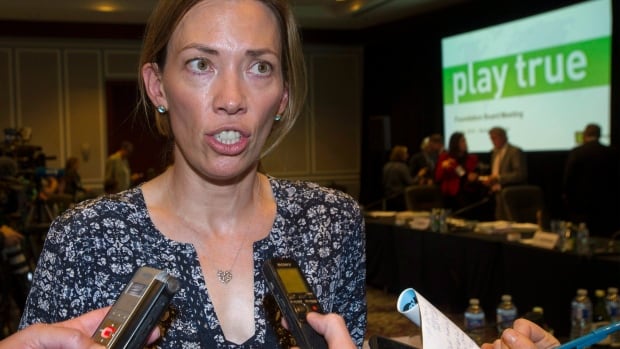 The head of the Canadian Centre for Ethics in Sport said he was "dismayed and disappointed" at the World Anti-Doping Agency's decision to reinstate Russia on Thursday, ending a nearly three-year suspension of the country's drug-testing program because of a state-sponsored doping scheme.

WADA decided to reinstate Russia after backtracking on two key conditions: that Russia accept a report that concluded state involvement in the doping and coverups, and that Russia give access to evidence stored in its discredited Moscow laboratory.

"I think it's terrible," said Canadian curler Chelsea Carey. "I think that it absolutely is wrong for them to reinstate them without having gone through the process that they were supposed to go through. Even then, I'm not sure that it was enough.

"I think it's atrocious but unfortunately I'm not terribly surprised."

Christiane Ayotte, the director of the WADA-accredited laboratory in Montreal, said she wasn't surprised by the WADA executive committee decision but can understand the disappointment.

They're completely taking away the punishment for the association,–  Chelsea Carey, Canadian curler

"I really doubt the Russians will, overnight, start working against doping and accept recognized standards," she said. "I will never have confidence that the Russians will have completely changed their cheating ways. Even if they have set up a laboratory in a university, the lab needs to be under trusteeship.

"I am going to try, as best I can, to make sure nobody helps them become once again the cheats they used to be."

RUSADA was suspended after the doping scandal, which centred on helping Russian athletes win medals at the 2014 Sochi Olympics, was revealed. The reinstatement development has sparked criticism from athletes and anti-doping officials across Canada and around the world.

Head of WADA's athletes committee is 'profoundly disappointed' with decision 6:53

"I was certainly dismayed and disappointed," Melia told The Canadian Press from Ottawa. "It's making me very disillusioned about the IOC and WADA's commitment to clean sport and clean athletes and the integrity of sport.

"I just can't believe that WADA would somehow rationalize their way to reinstating Russia even though they haven't fulfilled the Russia roadmap, in particular those two criteria that were outstanding."

Russia's Olympic committee was brought back into the fold after the Pyeongchang Olympics last February in South Korea. Athletes who could prove they were clean were able to compete at the Games as "Olympic Athletes from Russia."

"They're completely taking away the punishment for the association," Carey said from Calgary. "They've just undone any good that they did by banning — quote, unquote 'banning' — the association from the last Olympics."

Canada was third in the medal standings in Pyeongchang with 29 medals (11 gold, eight silver and 10 bronze), finishing behind Norway (39) and Germany (31). Olympic Athletes from Russia and host South Korea were tied for sixth place overall with 17 medals.

"Obviously Russia and the IOC have convinced WADA to change their mind on the roadmap and those criteria, so it proves that WADA is not able to act independently," Melia said. "It means that going forward the clean athletes, the anti-doping agencies, the governments of the world have to demand a reform to the governing structure of WADA because that executive committee is just a puppet of the IOC.

"That has to change going forward or we really don't have an effective international regulator for the code."

In Pyeongchang, Russian curler Alexander Krushelnitsky tested positive for the banned substance meldonium, which is believed to help blood circulation. He gave his medal back after winning mixed doubles bronze with his wife, Anastasia Bryzgalova.