Jair Bolsonaro, the controversial far-right presidential candidate, appears to be heading for victory in the first round of Brazil's election this weekend.

The 63-year-old former army captain has gained 12 percentage points in the polls since he was stabbed at a campaign rally early last month. And he now enjoys a 13-point lead — 35 per cent to 23 per cent — over his primary competitor, Fernando Haddad of the left-wing Workers Party. 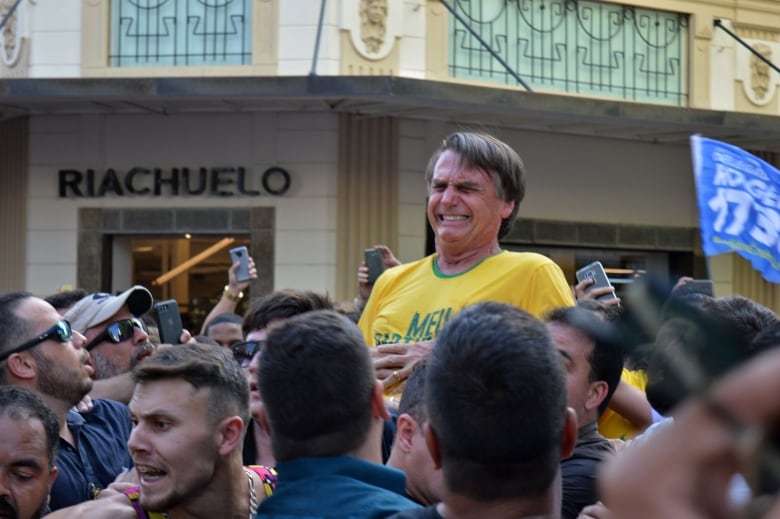 Brazilian right-wing presidential candidate Jair Bolsonaro is stabbed in the stomach during a campaign rally in Juiz de Fora, Minas Gerais State, in southern Brazil, on Sept. 6. He is still recovering but has returned to campaigning. (Raysa Leite/AFP/Getty Images)

The crowded field of 13 candidates makes it unlikely that anyone will obtain the required majority for a clear first-round win on Sunday. But if, as expected, Bolsonaro is among the top two finishers, his chances of taking the presidency in the Oct. 28 run-off vote seem strong. A Datafolha opinion poll this week gives the populist firebrand a two-point advantage over Haddad in a head-to-head matchup, 44 per cent to 42 per cent.

Voting is compulsory in Brazil, and 147 million people are expected to cast their ballots this weekend.

Bolsonaro, who was discharged from hospital last weekend, returned to the campaign trail last night — giving a one-on-one interview to a sympathetic television network. The sitdown overshadowed the final debate of the campaign, which was being broadcast at the same time on another channel. 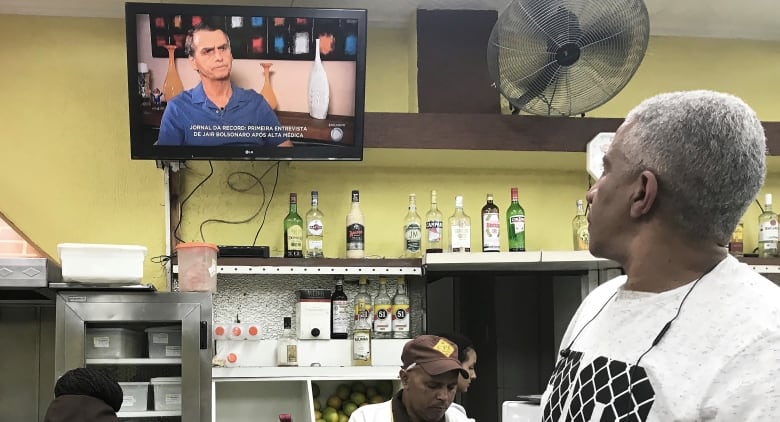 He hit some familiar themes, vowing to crack down on Brazil's soaring crime — more than 62,000 people have been murdered in the past year — and reinvigorate a stumbling economy that has left 13 million people without a job.

But Bolsonaro's promise to unify the country behind him will be a stretch.

Over his 27 years representing nine-different parties in Congress, the self-styled political "outsider" has offended freely and frequently, making disparaging remarks about visible minorities, women, homosexuals, the poor, and expressing his preference for a military dictatorship over democracy.

Tens of thousands of Brazilian women took to the streets last weekend to protest his candidacy, waving signs and banners emblazoned with a popular hashtag #EleNao (NotHim.) 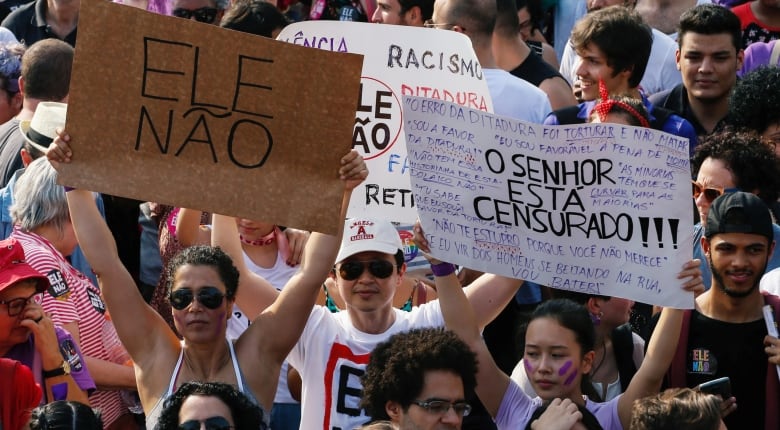 People demonstrate against Brazil's presidential candidate Jair Bolsonaro in Sao Paulo on Sept. 29. The writing on the signs read 'Not him' and 'You are censored.' (Alexandre Schneider/Reuters)

Bolsonaro is drawing much of his support from Brazil's large Evangelical Christian community, who are enthused by his vows to limit gay rights, get rid of sex education and ban abortion.

In fact, the polls suggest that Brazil is becoming as polarized as the United States, with 45 per cent of respondents saying they would "never" vote for Bolsonaro and 42 per cent expressing the same sentiment about Haddad.

The presidential candidate for Brazil's Workers' Party (PT), Fernando Haddad, campaigns in Sao Miguel Paulista, on the outskirts of Sao Paulo, on Sept. 19. Haddad was named the PT candidate after Lula finally gave up his audacious bid to stand in the Oct. 7 first round presidential election from his prison cell. (Nelson Almeida/AFP/Getty Images)

Yesterday, the Workers' Party — whose most popular figure, the former President Luiz Inacio "Lula" da Silva, is in jail serving a 12-year corruption sentence — debuted a new campaign commercial on its Twitter feed.

The black-and-white spot features clips of some of Bolsonaro's most controversial remarks, intercut with footage of Adolph Hitler.

A stand-in for the right-wing candidate is seen struggling to control his arm — à la Dr. Strangelove — before he finally gives the "Heil" salute.

The last image is a drawing that turns the 'L' in #ElNao into a nose, with a familiar mustache underneath.

By all accounts, being the president of Cameroon is a pretty good gig.

Paul Biya, the 85-year-old who has held the office since 1982, spends much of his time ensconced in five-star luxury at the InterContinental hotel in Geneva, Switzerland, some 6,700 kilometres away from Cameroon's capital Yaoundé.

In March, he held his first cabinet meeting since 2015. 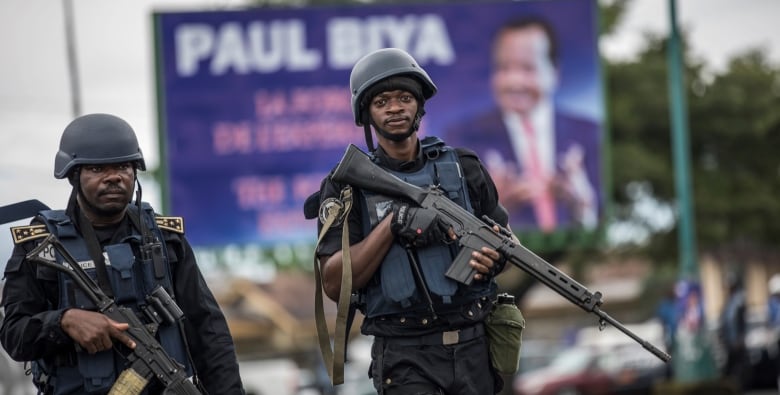 Still, somehow Africa's oldest and now second-longest serving leader appears likely to be re-elected to a seventh term this Sunday.

Cameroon's problems are deep and serious — widespread poverty, rampant government corruption and a growing rebellion among its Anglophone minority.

And Biya may win the vote because — not in spite — of them. 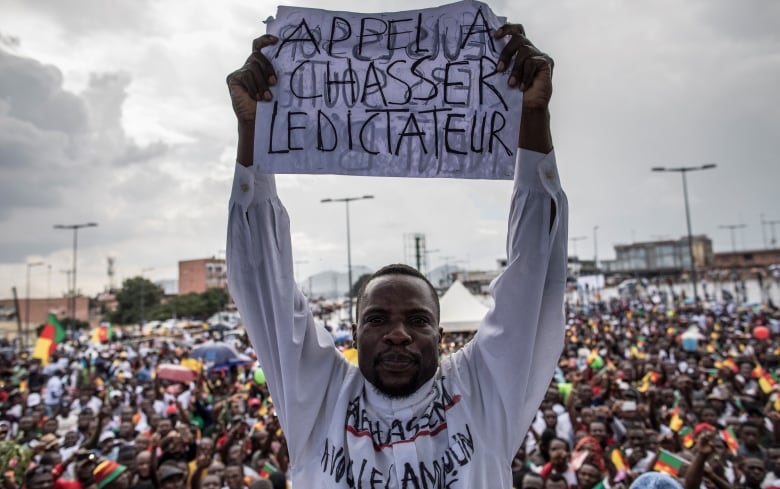 A man holds a paper with the writing in French 'A call to dismiss the dictator' in front of a crowd of supporters of the leader of the Cameroonian opposition party Movement for the Rebirth of Cameroon (MRC) during an electoral campaign rally on Sept. 30. (Marco Longari/AFP/Getty Images)

The opposition to his rule is divided, with seven other candidates running, and only 6.6 million of the country's 12 million eligible voters have registered.

But the biggest decider may end up being a planned boycott by Anglophones in the country's northwest and southwest provinces.

More than 400 people have been killed in a year of violence in those regions, after initially peaceful protests against the government morphed into a cycle of insurgent strikes and army crackdowns. 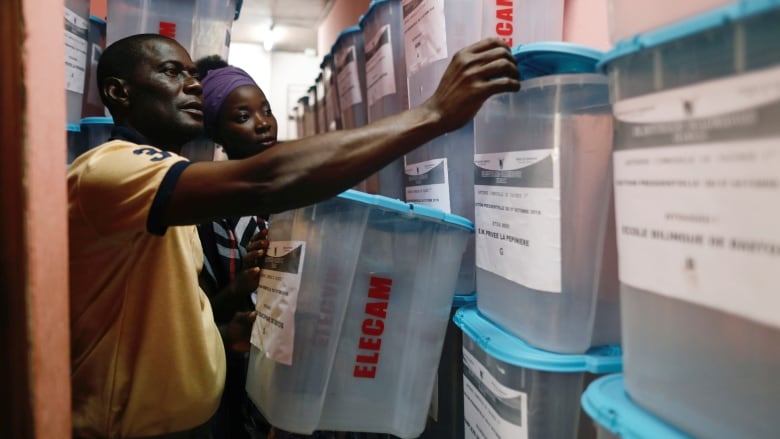 Tens of thousands of civilians have fled to neighbouring Nigeria. The guerillas, who want to create a separate English homeland called Ambazonia, are vowing to stop those who remain from casting their ballots, effectively eliminating the largest bloc of opposition to Biya's rule.

However, it appears that Biya's party isn't taking any chances.

Today, one of the opposition leaders, Maurice Kamto, warned of a "massive fraud" operation that he says is underway throughout the country, with supporters of the ruling Cameroon People's Democratic Movement issuing forged polling cards and making last-minute additions to the voter rolls.

If Biya succeeds on Sunday, he will receive another seven-year term.

The National co-host Andrew Chang checked out Edmonton's latest weapon in the war against weeds: a herd of goats.

When you're managing 375 goats, it's easy to lose one.

They're like ants — they tend to follow the goat ahead of them. But when one loses sight of its buddy, it risks losing the entire herd.

Before meeting Jeannette Hall, I didn't realize how much micromanaging goat-herding actually requires — especially so in her case, because she is an urban goat-herder.

Cities hire her because of what her goats eat.

You see, her goats are trained from birth to eat very specific plants. Noxious plants. Weeds. The kind that are universally unwelcome, aggressive, and sometimes even toxic to animals.

But her goats love them. 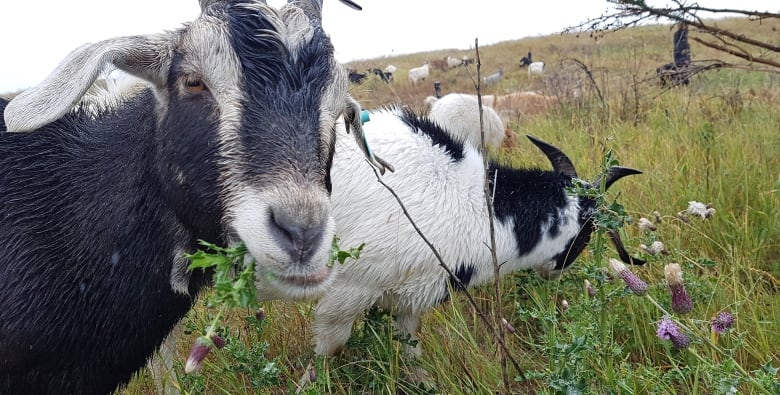 I spent some time with Jeannette one snowy week in Edmonton, where she had been hired to clear weeds from huge swaths of Rundle Park.

What possessed the city to turn to goats?

For starters, they're efficient. On a good day, a herd can plow through eight acres — attacking the weeds, but leaving grasses, saplings and other plants intact.

There's also no mess to cart away. Goat droppings are neatly pelleted, make good fertilizer, don't attract flies, and goat stomachs are so acidic they destroy most of the seeds that go in — so they're not simply "replanting" the weeds they eat.

Goats can also go where humans cannot — steep terrain, dense brush, you name it. An army of goats would run circles around a crew with weed whackers.

The city has used herbicides in the past, but they weren't effective. Some weeds developed resistance, and besides, why poison the park if you can avoid it?

Goats have a number of of advantages over human weed-cutting crews, including the ability to clear noxious weeds without harming other plants. (Andrew Chang/CBC)

This all might make goats sound like a slam dunk, but the biggest question mark is also the one that takes the longest to answer: will goats win the weed war, long-term?

You see, weeds grow back. Jeannette's main strategy is to constantly attack those regrowths ​— several times a year — before they can reproduce and spread their seeds. Do that enough times, she explains, and you can starve out the plant, depleting its sugar stores.

This is a war of attrition, not single-day skirmish. The pilot project runs for three years, with a $ 100,000 total price tag.

And besides tackling weeds, Jeannette says there are fringe benefits — like how her goats can also help reduce wildfire risk. That's a whole other story.

Helping out the Big Guy. 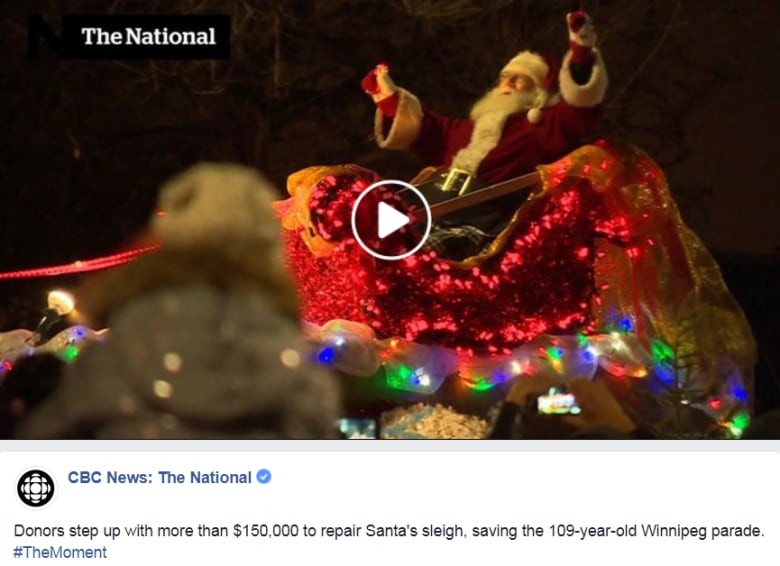 "A lot of people don't realize how significant the injuries are … when you look at the severity of injury — meaning how the injury needs to be treated — the admission rate for injuries sustained with trampolines is much higher than a lot of other sports."

– Dr. Laura Purcell, founding president of the Canadian Paediatric Society's paediatric sport and exercise medicine committee, who has been studying trampoline injuries for more than a decade and has co-authored research papers for CHIRPP.

Dr. Laura Purcell explains why some of the risky actions captured by Marketplace could result in serious injury. 0:55

It took Laurie Skreslet and his two Sherpa guides a little over five hours to reach Mount Everest's summit on a bright October morning. The 32-year-old Calgarian spent 33 minutes on the roof of the world, despite the -30C temperature. At the time, he was joining an "exclusive fraternity" of 100 or so climbers who had conquered the world's tallest mountain. In the 36 years since, another 4,700 people have reached the summit, many of them tourists who were pushed and pulled up Everest's slope.

A note to readers

The National Today will be taking Monday off to recover from that rather dramatic turkey giveaway at the Pinedale shopping mall. It returns Tuesday, Oct. 9. Happy Thanksgiving.