When the Royal Family takes its annual stroll on Christmas morning, there's likely to be more media scrutiny than usual as they make their way to church in the lush English countryside.

For weeks, there has been fevered tabloid speculation about tensions behind palace walls, particularly suggestions that all is not well between the "duelling duchesses," Kate and Meghan.

So naturally, extra attention is likely to focus on how everyone appears to be getting along during the walk to church at Queen Elizabeth's Sandringham Estate northeast of London. Who is there? Who is walking beside whom? Will one duchess cast a wayward glance toward another?

"You can interpret a look in whichever way you want to see it," said Mark Borkowski, a British public relations expert who has worked with everyone from Mikhail Gorbachev to Michael Jackson.

"The media, particularly the online [sites] who are generating clickbait over this row, will continue to stir this up, because it's of value to them."

Of course, a walk down a country path is hardly a true indication of how members of any family are getting along. Anyone can put on a good display of bonhomie for a few minutes. 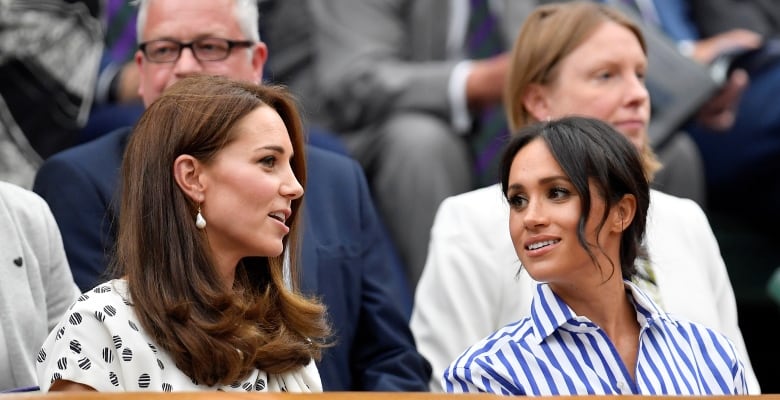 Kate and Meghan seemed in good spirits as they watched a tennis match at Wimbledon last summer. (Toby Melville/Reuters)

But if palace courtiers have impressed upon the family the need to buff up the image of the House of Windsor in the wake of all the negative headlines, Christmas morning may provide an opportunity to counter them.

"With all this speculation about there being conflict behind the scenes, we may well see a show of royal unity with the whole family attending," says Carolyn Harris, a Toronto-based royal historian and author.

It is virtually impossible to know whether Kate and Meghan really are "duelling," as some tabloids have trumpeted.

But some observers have suggested that after years of great closeness, it's actually their husbands William and Harry who have developed a bit of froideur.

Moving out of the city

Much of the recent scrutiny comes after word that Harry and Meghan, who married last spring, will set up their permanent home at Frogmore Cottage, near Windsor Castle, just west of London. It had long been expected they would settle in a refurbished apartment at Kensington Palace in London, where William, Kate and their three children live.

"Tension between Harry and William may have inspired Harry and Meghan's move to the suburbs," reads a recent headline from Vanity Fair's royal correspondent, Katie Nicholl.

"Kate and Meghan are very different people, and they don't have a lot in common, but they have made an effort to get along," a source told Nicholl. "Any issues are between the brothers." 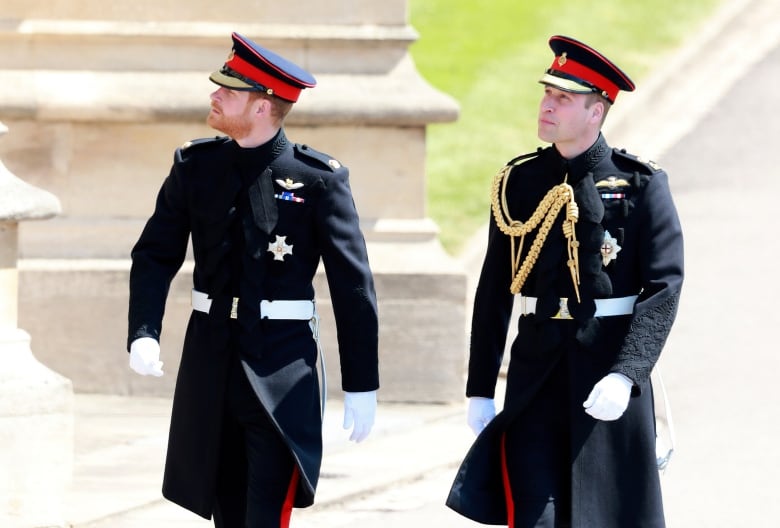 William, right, was Harry's best man at his wedding at St. George's Chapel in May. (Lauren Hurley/Reuters)

One report suggests William may have cautioned Harry over the speed with which his relationship with Meghan developed.

"As I saw the hype that built around the royal wedding of Meghan and Harry, I thought this spells trouble… this is going to upset the apple cart."

In recent years, that realm has been increasingly focusing on the polished but traditional image of William, second in line to the throne, and Kate, whom he married in 2011. Their family grew with the birth of their third child, Prince Louis, who arrived less than a month before his uncle Harry's wedding.

The Duke and Duchess of Cambridge are pleased to share a new photograph of their family. <br> <br>The photograph, taken by Matt Porteous, shows The Duke and Duchess with their three children at Anmer Hall, and features on Their Royal Highnesses’ Christmas card this year. <a href="https://t.co/6XqCMlhLi8">pic.twitter.com/6XqCMlhLi8</a>

But things have changed as Meghan, an American actress who was divorced from her first husband, arrived on the scene.

The Duke and Duchess of Sussex are delighted to share a new photograph from their Wedding Reception at Frogmore House on 19th May.<br> <br>The photograph, which features on Their Royal Highnesses’ Christmas card, was taken by photographer Chris Allerton. <a href="https://t.co/PQPUuRwnIj">pic.twitter.com/PQPUuRwnIj</a>

"You've got a very modern viewpoint against something that is very much establishment. Kate is very much what you'd expect to be the future queen, and you've got this disruptive force within [the family]. It is like a Game of Thrones sort of script."

Any family anywhere in the world has tension, he said.

The times are changing

Harris sees the younger generation of the Royal Family undergoing a period of transition, particularly after years of closeness and protectiveness between William and Harry.

Now, she said, they are at different stages in their lives.

The brothers may be close in age (36 and 34), but one has an established family and the other is just starting down that road. (Harry and Meghan's first child is expected in the spring.)

If there is tension among the young royals, it is hardly unprecedented. Previous generations are full of examples where those marrying into the family upset the equilibrium. 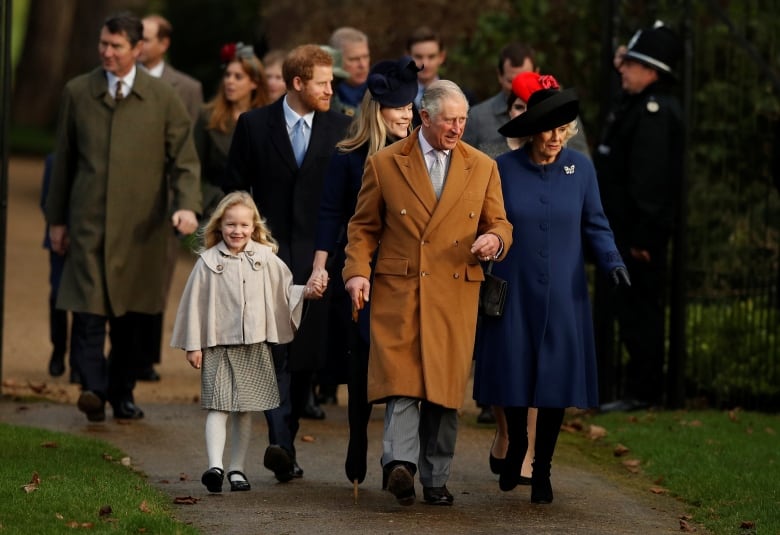 Prince Harry, centre, walks with other members of the Royal Family behind his father, Prince Charles, at the Christmas Day church service in Sandringham in 2016. (Phil Noble/Reuters)

"In the 19th century, when foreign royalty was marrying into the Royal Family, sometimes political differences complicated personal relationships," said Harris. Queen Victoria found herself banning dinner conversation about a conflict between Denmark and Germany because of personal tensions amid family members.

And then there's the conflict that erupted with the arrival of Wallis Simpson, the twice-divorced American who was at the root of Edward VIII's abdication from the throne in 1936.

That abdication meant his younger brother Albert became King George VI, dramatically altering the course of Albert's life and that of his family — his wife, Elizabeth, and their daughters Elizabeth, the current Queen, and Margaret.

Elizabeth, later the Queen Mother, "greatly resented the fact that the relationship between Edward the Eighth and Wallis Simpson had created such a change in their lives," said Harris.

What about the Queen?

As much as the scrutiny next Tuesday will fall on the younger generation of the Royal Family, Harris expects others will also be a focus of attention.

She cited the fact that the Queen and Prince Philip are both in their 90s, "and often their appearance at these church services is a way of reassuring the public that they are both in good health." 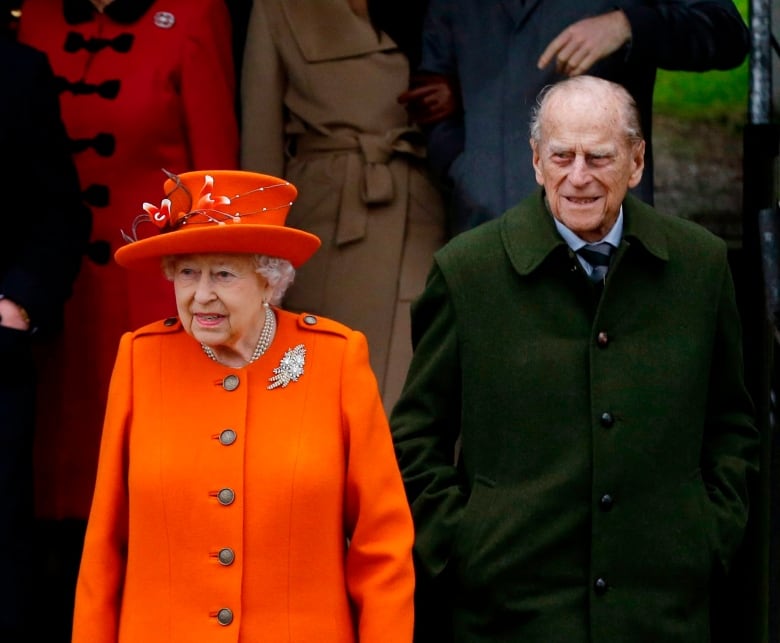 Two years ago, the Queen wasn't at the Christmas Day service or at church the following Sunday as she recovered from what was described at the time as a heavy cold.

It's all part of managing the public image of the House of Windsor. And that image, Borkowski suggests, has been taking a hit through the recent swirl of headlines. 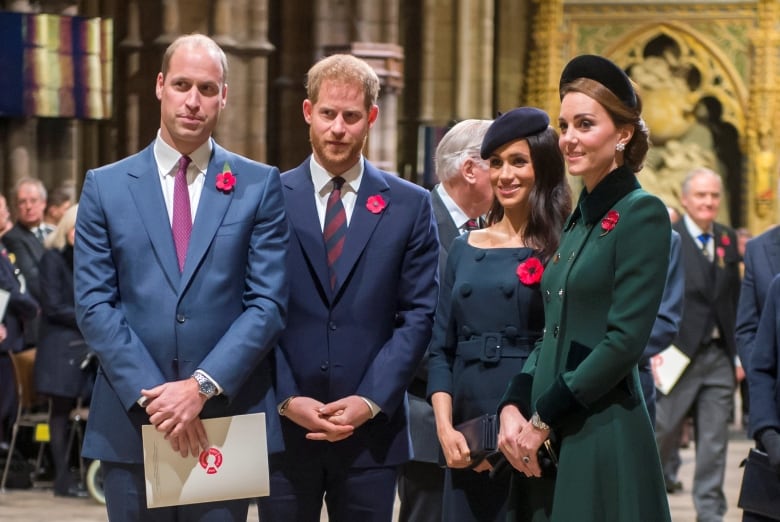 William, Harry, Meghan and Kate arrive for an Armistice Service at Westminster Abbey in London on Nov. 11, 2018. (Paul Grover/Reuters)

He said that if the media speculation continues as it has, that image is "going to erode really badly."

Borkowski expects royal staff will be evaluating the situation over the Christmas period.

"There will become a point that if it carries on at this pace of so much negativity …  that someone will have to take a view that we've got to do something — either a television moment or something to put this to rest."