Law enforcement failed to adequately plan for or respond to a violent white nationalist rally this summer in Virginia, leading to “deep distrust of government” in the Charlottesville community, an independent review released Friday found.

Former U.S. Attorney Tim Heaphy’s monthslong investigation found a lack of co-ordination between state and city police and a passive response by officials to the chaos. The report also found that police removed an officer from an area where a car plowed into counterprotesters and killed a woman and injured 19 others, leaving only a small sawhorse in place at the time.

“Supervisors devised a poorly conceived plan that under-equipped and misaligned hundreds of officers. Execution of that plan elevated officer safety over public safety,” the report found.

The City of Charlottesville also did not protect free expression on Aug. 12, the report said.

“This represents a failure of one of government’s core functions — the protection of fundamental rights,” it said. “Law enforcement also failed to maintain order and protect citizens from harm, injury, and death. Charlottesville preserved neither of those principles on Aug. 12, which has led to deep distrust of government within this community.”

White nationalists descended on Charlottesville in part to protest plans to remove a statue of Confederate General Robert E. Lee. They began fighting in the streets with counterdemonstrators before the event even officially began and the brawling went on for nearly an hour in front of officers until the event eventually disbanded.

Later, as counterdemonstrators were peacefully marching through a downtown street, a car drove into the crowd, killing 32-year-old Heather Heyer and injuring many more.

Public works officials had suggested using large barriers that can be filled with water to block vehicular traffic but Heaphy said “it just didn’t happen.”

The report was put together based on about 150 interviews, and the review of photos, video and over half a million documents.

Officers were dressed in everyday uniforms, not riot gear, at the start of the event. Instead of having helmets and shields next to the officers, the equipment was staged behind barricades. Officers had to leave the conflict areas to go get it, Heaphy said at a news conference.

“Because of their misalignment and lack of accessible protective gear, officers failed to intervene in physical altercations that took place in areas adjacent to Emancipation Park,” where the Lee statue stands, the report said.

State police directed their officers “to remain behind barricades rather than risk injury responding to conflicts between protesters and counterprotesters,” the report said. And Charlottesville commanders “similarly instructed their officers not to intervene in all but the most serious physical confrontations.” 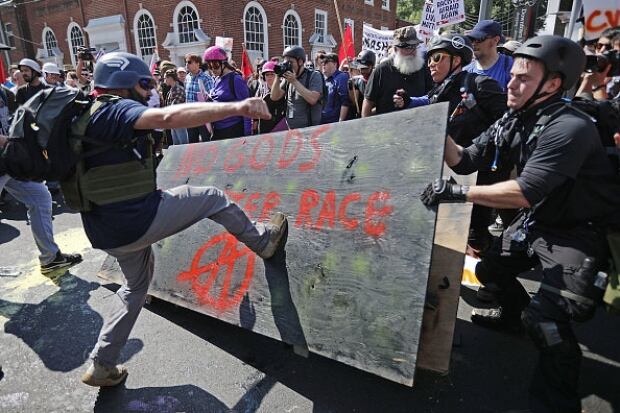 One woman died and 19 others were injured when a car plowed into a group of counterprotesters during the rally. (Chip Somodevilla/Getty Images)

A handful of community members attended the press conference Friday, peppering Heaphy with questions and expressing distrust of both his review and the police department.

Virginia Gov. Terry McAuliffe, Police Chief Al Thomas and other top officials have previously defended the law enforcement response, saying police had to show restraint because some people in the crowd were heavily armed.

On Friday, City Manager Maurice Jones said in a statement that the city does not “agree with every aspect of the report’s findings” but that “we, and our law enforcement partner in the Virginia State Police, undoubtedly fell short of expectations, and for that we are profoundly sorry.”

He said the city is developing an action plan that will be unveiled during a council meeting next week.

State police did not immediately respond to a request for comment.

Kevin Martingayle, an attorney representing the police chief, said Thomas disputes allegations in the report that he deleted text messages that were relevant to the review.

Thomas gave a brief statement before leaving the room, saying: “We are a community divided. We are still a community in crisis.”

He said he was committed to implementing the recommendations in Heaphy’s report.

The report suggested that the General Assembly empower cities to enact “reasonable restrictions” on the right to carry guns at large protests.

Heaphy served as the U.S. attorney in Virginia from 2009-15, after being appointed by then-president Barack Obama. He currently heads the white-collar defence and investigations practice of the law firm Hunton & Williams.