One in eight Canadian adults says a family member or close friend has become “dependent on or addicted” to opioids in the last five years, an Angus Reid poll released on Thursday says.

The poll also suggests that even as public awareness of the devastating risk of addiction to opioid painkillers — including oxycodone, hydromorphone, and fentanyl — has risen, they are still regularly prescribed. One in five Canadian adults said they had personally been prescribed opioids in the last five years.

“It is really something that cuts across the entire spectrum of society, across, you know, different spectrums of the economy, of class, of education,” Kurl said.

“This isn’t a problem that [only] other people over there, across the street, on the other side of town are dealing with.” 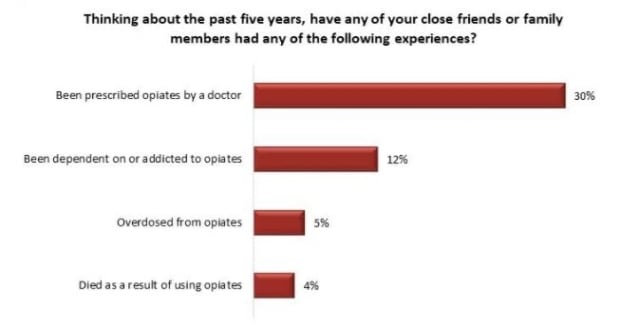 A graph showing the results of the Angus Reid poll question about whether respondents’ close friends or family members had been personally affected by opioids. (Angus Reid Institute)

The number of opioid-related overdose deaths has continued to rise in the last few years, largely fuelled by the increased presence of fentanyl, a highly potent opioid that has become increasingly present in street drugs such as heroin and cocaine. Users often don’t know that they’re even taking fentanyl.

The Public Health Agency of Canada predicts that the number of opioid-related overdose deaths for 2017 will surpass 4,000 once the numbers are available from all provinces and territories. There were 2,861 such deaths reported in 2016.

The poll adds a broader perspective to the “heartbreaking, cautionary stories from families” that have been told in the media about how the opioid crisis has affected them, Kurl said.

Dr. David Juurlink, head of clinical pharmacology and toxicology at Sunnybrook Health Sciences Centre in Toronto and a recognized opioid expert, said he is “not at all surprised” at the number of people who reported that someone close to them was dependent on opioids.

“The drugs are just that ubiquitous in society,” Juurlink said in an email to CBC News.

“I’m even less surprised that one in five Canadians was prescribed an opioid in the past five years,” he said. “This is reflective of how common pain is, but also how much freer doctors are [with] opioids than we were 20 years ago.

“This change happened not because we had good studies to guide the practice. It happened because we were misled about the safety and effectiveness of opioids by pain specialists and the drug companies that paid them.” 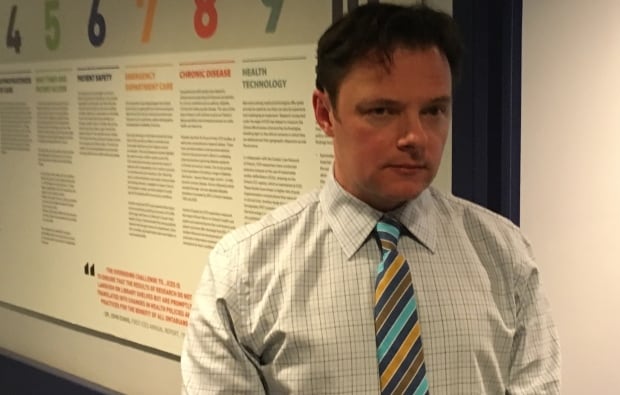 Dr. David Juurlink, head of clinical pharmacology and toxicology at Sunnybrook Health Sciences Centre in Toronto, says he’s ‘not at all surprised’ that many people in Canada are still being prescribed opioids. (Nicole Ireland/CBC)

Juurlink has been actively involved in developing new guidelines to change the way Canadian physicians prescribe opioids and manage addiction, as the federal government tries to tackle opioids as “a national public health crisis.”

A possible limitation to the poll, he noted, is the fact that drug dependency “means different things to different people.” Respondents were simply asked if any of their close friends or family members had “been dependent on or addicted to opiates,” without providing a clinical definition of what that means.

It’s possible the pervasiveness of the opioid problem may be even larger than the poll results indicated, Kurl said, because a limitation in public opinion polling overall is the challenge of reaching marginalized people.

In addition to asking Canadians about their personal exposure to the opioid crisis, the poll also asked for opinions on supervised consumption sites, in which harm reduction workers or volunteers watch as people inject their drugs and medically intervene if they overdose. The facilities also ensure that drug users have clean supplies to prevent infection, and often provide other essentials, such as water, to people who need them.

Two out of three Canadians (67 per cent) are in favour of supervised consumption sites, the poll suggests. People of all ages (from 18 to over 55) and both women and men were about equally supportive. 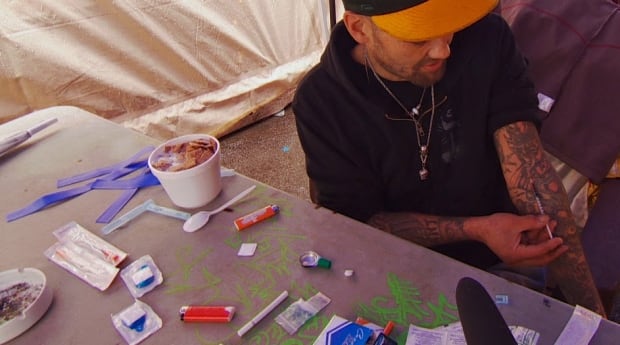 A man addicted to heroin uses a supervised injection site in Vancouver. (CBC)

But “the big divider” between those who supported supervised injection sites and those who were against them, Kurl said, was their political affiliation.

People who supported the Conservative Party were split on the issue, with 46 per cent in favour of supervised injection sites and 54 per cent against.

But Liberal Party and NDP supporters were “overwhelmingly” in favour of the sites, Kurl said, with 79 and 80 per cent support, respectively.

That’s likely related to the fact that safe injection sites were a topic of debate that “raged” for a long time while the Conservative government was in power, Kurl said. Under Prime Minister Stephen Harper, the Conservatives passed the Respect for Communities Act in 2015, which required strict criteria to be met before new safe injection sites could be considered. The Liberal government eased those requirements, with support from the NDP.

The Angus Reid Institute conducted its online survey from Nov. 14-20, 2017 among a “representative, randomized sample of 1,510 Canadian adults who are members of the Angus Reid Forum.” A probability sample of this size, it says, would carry a margin or error of plus or minus 2.5 percentage points, 19 times out of 20.