A Gulf of Mexico storm rapidly intensified early on Friday spinning into potentially the biggest hurricane to hit the mainland United States in 12 years, taking aim at the heart of nation’s oil refining industry.

The U.S. National Hurricane Center said in an updated forecast Friday morning that the outer rain band from the powerful storm was already hitting parts of the lower and middle Texas coasts.

Forecasters cautioned that “catastrophic flooding” is expected in the southern and southeastern parts of the state.

As of 11 a.m. ET, the storm was about 185 kilometres southeast of Corpus Christi with maximum sustained winds of 175 km/h.

On its current track, Harvey is expected to make landfall on the Texas coast Friday night or early Saturday morning.

Earlier Friday, as the storm swirled toward the land, officials at the hurricane centre urged people to rush to complete preparations ahead of the storm.

The storm could bring a surge in sea levels as high as 3.7 metres and dump up heavy rain over parts of Texas.

“Now is the time to urgently hide from the wind. Failure to adequately shelter may result in serious injury, loss of life, or immense human suffering,” the U.S. National Weather Service said earlier in the day.

Texas officials expressed concern that not as many people are evacuating compared with previous storms.

“A lot of people are taking this storm for granted thinking it may not pose much of a danger to them,” Gov. Greg Abbott told Houston television station KPRC.

“Please heed warnings and evacuate as soon as possible.”

Abbott has activated about 700 members of the state National Guard ahead of Hurricane Harvey making landfall.

U.S. President Donald Trump said he’s been in touch with the governors of the states in the storm’s path.

I have spoken w/ @GovAbbott of Texas and @LouisianaGov Edwards. Closely monitoring #HurricaneHarvey developments & here to assist as needed.

State transportation officials were considering when to turn all evacuation routes from coastal areas into one-way traffic arteries headed inland.

John Barton, a former deputy executive director of the Texas Department of Transportation, predicted state officials will do so before the storm hits. But storms change paths, and if traffic starts moving in the opposite direction too early, supplies such as extra gasoline needed to support impacted areas can’t get in, he said.

Some storm-related warnings and watches are also in effect for northern Mexico and Louisiana. The threat has triggered evacuations and cancelled the first day of school in communities along the south Texas coast, which is home to 5.8 million people from Corpus Christi to Galveston.

Storm surge is expected to be a major risk as Harvey nears, with “a danger of life-threatening inundation from rising water moving inland from the coastline” in some areas.

The hurricane centre said the deepest water will likely appear on the coast and northeast of where the storm makes landfall. Large and destructive waves will come along with the expected surge, forecasters warned. 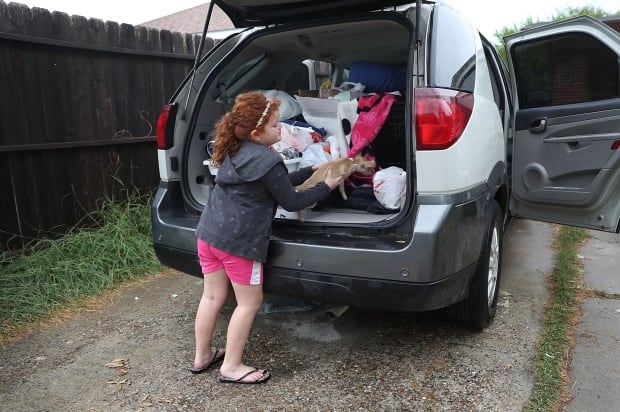 Lilyann Lewis packs the vehicle on Friday as her family gets ready to evacuate their home before the approaching Hurricane Harvey in Corpus Christi, Texas. (Joe Raedle/Getty Images)

All seven counties on the coast from Corpus Christi to the western end of Galveston Island have ordered mandatory evacuations of tens of thousands of residents from all low-lying areas.

In four of those counties, officials ordered their entire county evacuated and warned those who stayed behind that no one could be guaranteed rescue.

Voluntary evacuations have been urged for Corpus Christi itself and for the Bolivar Peninsula, a sand spit near Galveston where many homes were washed away by the storm surge of Hurricane Ike in 2008. 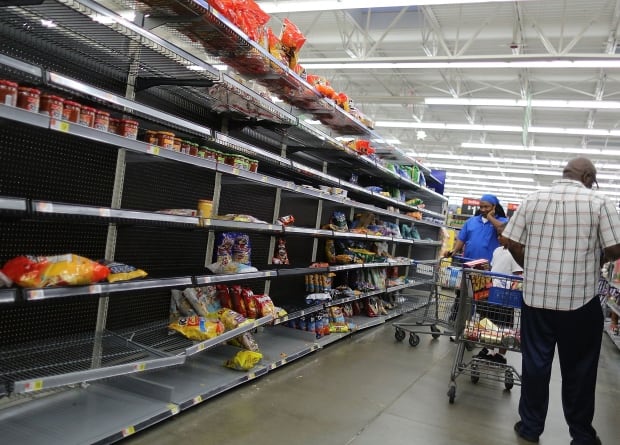 Harvey is forecast to come ashore as a Category 3 hurricane, the U.S. National Hurricane Center said, which would make it the first major hurricane to hit the mainland U.S. since Hurricane Wilma struck Florida in 2005.

Superstorm Sandy, which pummeled New York and New Jersey in 2012, never had the high winds and had lost tropical status by the time it struck. But it was devastating without formally being called a major hurricane.