Members of a thalidomide survivor group say they felt belittled and are appalled after meeting with Kent Hehr, the federal minister for persons with disabilities, and accuse him of making repugnant statements about their life expectancies.

The minister flat out denies at least one of their claims and said he has apologized if some of his comments were misinterpreted.

Fiona Sampson, a thalidomide survivor who attended the Oct. 19 meeting, told reporters on Tuesday that Hehr degraded those in attendance with his remarks.

“In response to members of the group reading really heartfelt testimonials, Minister Hehr — apropos of nothing — commented, ‘Well you don’t have it as bad today as adults as you did when you were kids,'” said Sampson, a human rights lawyer and chair of Thalidomide Survivors Task Group.

“Then he went on to say, ‘Well you don’t have it so bad. Everyone in Canada has a sob story.'”

Sampson said one of the most repugnant statements in the 30-minute meeting came after the group explained to Hehr that they have shortened lifespans and have already lost five members since the House of Commons passed a unanimous motion to support survivors back in 2014.

“He said to us, ‘So you probably have about 10 years left then now. That’s good news for the Canadian government.’ We were shocked and appalled,” she said.

One of the members in that meeting was hospitalized in the ICU two weeks later, said Sampson, making his comments “especially repugnant”

Thalidomide Survivors say they were degraded by the Disabilities Minister1:57

Sampson said her team wrote to the prime minister directly about the meeting and Hehr later called her to apologize.

In a statement, Hehr denied making comments about lifespans at the meeting, but said he apologized to the organization after his comments were misconstrued.

“My heart goes out to thalidomide survivors. I have listened to their stories and I know our government, led by the minister of health, is taking the concerns very seriously and I will continue to advocate on behalf of all Canadians with disabilities,” said Hehr in a statement issued Tuesday.

“As someone with a disability myself, it was certainly not my intention to offend anyone. While some of my comments were misconstrued, as soon as I learned that my comments were felt to be offensive, I immediately called the organization directly and apologized.”

Sampson also alleges at one moment in the meeting Hehr was feigning shock and reached out to grab one of the members by the arm, close to her breast.

“In a way that was inappropriate and and unwelcome. And I think that was a shock to us all too,” said Sampson.

“It was an unwelcomed physical contact that violated her personal space.”

The member in question is sick and wasn’t at the news conference, she added.

Hehr said today was the first time he’s hearing about the accusations.

“Last week I spoke directly to the organization to apologize if my comments were misconstrued, but today was the first time I heard about this accusation and I am extremely troubled by it. If there was any physical contact, it was completely accidental and I apologize,” he said. 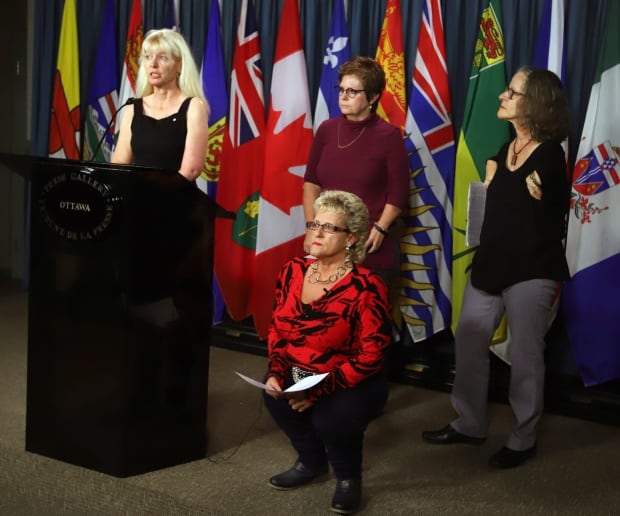 The survivors are calling on the federal government to honour a pledge to compensate them with a lump sum payment of $ 250,000 and increased annual pensions.

They say patients have received lump sum payments of $ 125,000 each, noting they are struggling to make ends meet due to the extent of their disabilities.

In December 2014, the House of Commons passed a unanimous motion with a commitment to provide “full support’ to Canadian thalidomide victims who were born with physical disabilities due to the effects of the drug, used to combat morning sickness, during pregnancy.

Complicating the plot line, a group called the Thalidomide Victims Association of Canada released a statement distancing itself from Tuesday’s bombshell press conference.

“These survivors are not members of the original thalidomide survivors task force and did not participate in the work that went into developing the settlement program that was announced in 2015,” said executive director Mercedes Benegbi.

“While no amount of financial support will ever be enough to compensate these individuals for the pain and suffering they’ve endured, the program that exists today is making a significant difference in the lives of thalidomide survivors and is allowing them to live with dignity.”