Curling Canada high-performance director Gerry Peckham acknowledges that the current residency setup for elite Canadian curlers is an issue that is "timely and incredibly relevant."

It seems quite possible change could soon be on the horizon.

The Tim Hortons Brier and Scotties Tournament of Hearts used to be the zenith for elite Canadian curlers but things started to change when the sport was added to the Olympic program in 1998. Most top competitors have embraced a quadrennial approach where teams are built with Olympic qualification in mind.

Despite that shift, curlers must still adhere to residency rules in order to compete at national championships. At least three of the four players on a team must reside in the same province or territory.

That has forced some athletes to relocate, switch jobs or come up with creative solutions to prevent violations.

Other sports may raise an eyebrow at such a seemingly archaic setup. But the Brier and the Scotties — as well as the provincial/territorial playdowns that precede them – are tradition-steeped annual events that remain highlights of the domestic curling season.

Those championships also involve a wide variety of stakeholders who are heavily invested in those events. Curling Canada has to balance that with the goal of success at world championships and Olympic Games, especially when the sport's domestic funding could be affected by results at those competitions.

It can be difficult for Canada to put its best foot forward with so many priorities, including where an athlete may reside, in the mix.

"It's complex," Peckham said in a recent interview. "We have evolved and allowed ourselves to evolve into a situation where we're preserving the integrity of an inter-provincial/territorial championship that comes with so much history and tradition and culture. It also has always had a residency-based theme to it.

"So the question really is how long can you perpetuate that and to what degree can you compromise that."

Aside from one 'free agent,' all players on a team must be bona fide residents of the province/territory before Sept. 1 of the year preceding a curling season. There are exceptions — school, work, proximity to the border, military service, to name a few — but they must be cleared with the respective member association and Curling Canada ahead of time.

To further muddy the waters, curler hometowns can sometimes be a grey area.

For example, world champion Jennifer Jones is listed as being from her native Winnipeg when she curls with her four-player team, but her current hometown of Shanty Bay, Ont., is used when she curls with mixed doubles partner and husband Brent Laing. 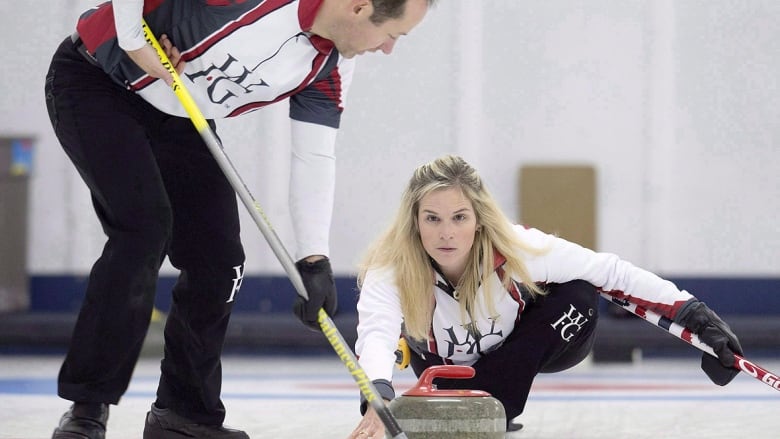 World champion Jennifer Jones is listed as being from her native Winnipeg when she curls with her four-player team, but her current hometown of Shanty Bay, Ont., is used when she curls with mixed doubles partner and husband Brent Laing. (Frank Gunn/Canadian Press/File)

Rachel Homan, meanwhile, is primarily based in Alberta. She goes to school in Edmonton, her husband lives in nearby St. Paul, but she still maintains a residence in her native Ottawa.

"She's got a home in Alberta whether she's a student or not," said longtime curling broadcaster Mike Harris, who represented Canada at the 1998 Nagano Games. "I think that Curling Canada needs to be real about it and just say, 'Listen, two (free agents) is fine.' Or even just abolish the whole residency thing altogether."

The Ontario field is much deeper with the addition of Homan's team, which includes Edmonton's Joanne Courtney and Ottawa-based Lisa Weagle and Emma Miskew.

Harris said he understands why some other teams may be grumbling about the situation.

"[They] have jobs and live in the province and now they see that they have to play Rachel again this year," he said. "And they know that only two of them are living [full-time] in Ontario. So yeah, I think they actually have to do something about that."

If requested by a member association, an athlete must be able to provide at least three items from the province or territory, including a driver's licence, health care card, employer letter, landlord/bank statement or property tax invoice.

The athlete must also "spend the majority of their non-compete time in the province/territory in which they are claiming to be a bona fide resident," according to Curling Canada policy. That doesn't apply to Homan thanks to the student exemption.

Curling Canada does have a "Whereabouts" program it can use to establish compliance with residency and exemption criteria. But it has only been used once since the program's inception in the 2015-16 season, according to a federation spokesman.

Most lineup changes occur at the end of season or in the summer, especially entering a new quadrennial. It's common for curlers to switch provinces if they do make a move and it can sometimes create an easier route to nationals.

Adam Casey, John Morris and Ryan Fry are examples of players who have curled for three different provinces at the Brier.

Peckham expects the residency issue to be a talking point over the next year and he'd like all curling stakeholders — athletes, member associations, sponsors, television partners and others – to be involved in discussions on potential tweaks or adjustments.

"Obviously heading into Year 2 of the quadrennial, which is kind of when the whole (Olympic) qualification process starts in earnest, we're going to have to revisit it," Peckham said. "Which means between now and next September, there is a lot of homework to do."

Homan and Courtney were on opposing sides over the weekend at the Sherwood Park Curling Club's Mixed Doubles Classic in Alberta.

Homan and teammate Marc Kennedy defeated Courtney and her father, Ryan Taylor, in the semifinals before beating Bobbie Sauder and

Shawn Donnelly in the final to cap an unbeaten run.

Other notable teams in the field included Steve Laycock and Kristen Streifel along with Heather and Dave Nedohin.

Officer back on duty

Team Jennifer Jones will have a familiar face on the bench this week at the China Open.

Jill Officer will serve as a team alternate at the World Curling Tour competition in Chongqing. She stepped away from competitive curling after last season and was replaced at second by Jocelyn Peterman.