Heavily armed police rushed to an incident at a London underground station on Friday with local media reporting there had been an “explosion” on a train.

A Reuters witness could see six ambulances, fire engines and a helicopter at Parsons Green station in West London where the Metro newspaper reported that passengers had suffered facial burns from a blast and others had been hurt in a subsequent stampede.

Outside the station, a woman was sitting on a pavement with a bandage around her leg while armed police patrolled. A Reuters witness saw a woman being carried off on a stretcher with her legs covered in a foil blanket.

“There was a woman on the platform who said she had seen a bag, a flash and a bang, so obviously something had gone off,” he said.

“Some people got pushed over and trampled on, I saw two women being treated by ambulance crews.”

He said he did not believe anyone was hurt by the actual device.

“We are aware of an incident at #ParsonsGreen tube station. Officers are in attendance,” London police said on Twitter.

Police said they were aware of reports on social media and would release facts regarding the incident once they could be sure of their accuracy.

London Ambulance and Fire Brigade said paramedics and firefighters were present. Transport for London said on Twitter that there was no service between Earls Court and Wimbledon on the District Line which runs through Parsons Green.

The incident happened during rush hour when the Underground system is crowded. Passengers were advised to use alternate routes. 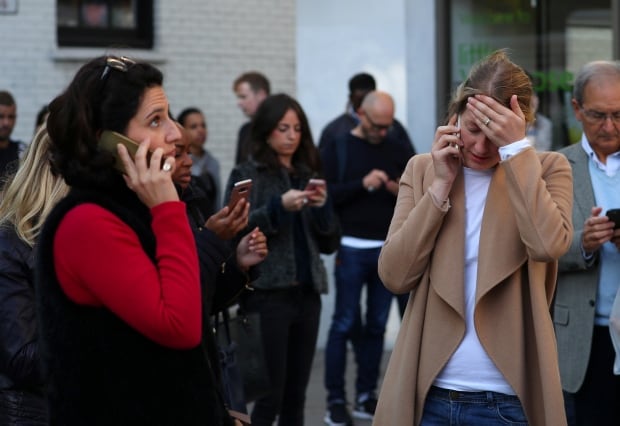 One witness reportedly told Reuters that there was a rough dash for exits after the bang. (Hannah McKay/Reuters)