Zimbabwe's capital was calm on Friday hours after President Emmerson Mnangagwa was declared the winner of the tight election, which began with Monday's peaceful vote but turned deadly when the military fired on protesters 48 hours later.

Six people were killed in the melee when the army rolled in tanks to disperse rock-throwing demonstrators who denounced Mnangagwa and alleged vote-rigging.

Harare's roads appeared to be free from the troops Friday. Water cannons and police remained present, however, at the headquarters of the main opposition party, a day after authorities raided it and made 18 arrests.

Mnangagwa, on Twitter, said he was "humbled" by the victory and urged Zimbabweans to stay peaceful.

The opposition has said it will challenge in court the results of the election, which Mnangagwa won with just over 50 per cent of the vote. 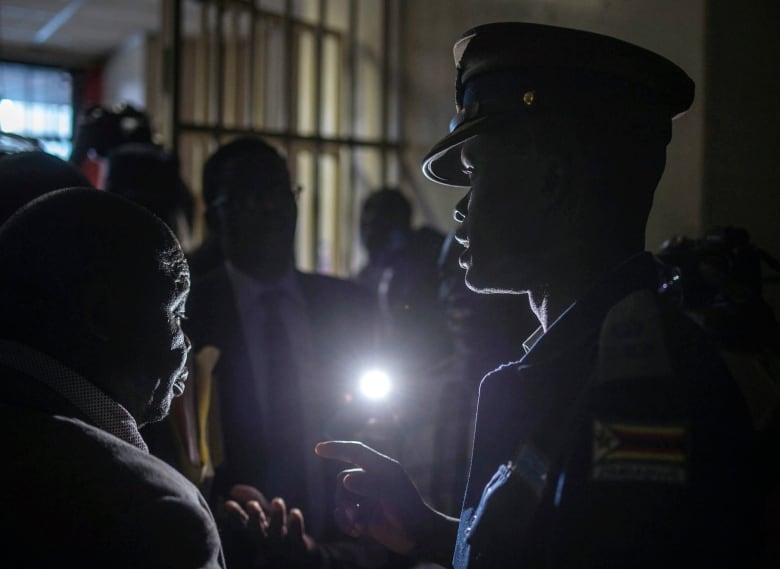 Opposition leader Nelson Chamisa, who received more than 44 per cent of the vote, said on Twitter that "unverified fake results" had been announced by the electoral commission.

The commission "must release proper and verified results endorsed by parties," Chamisa tweeted. "The level of opaqueness, truth deficiency, moral decay and values deficit is baffling." 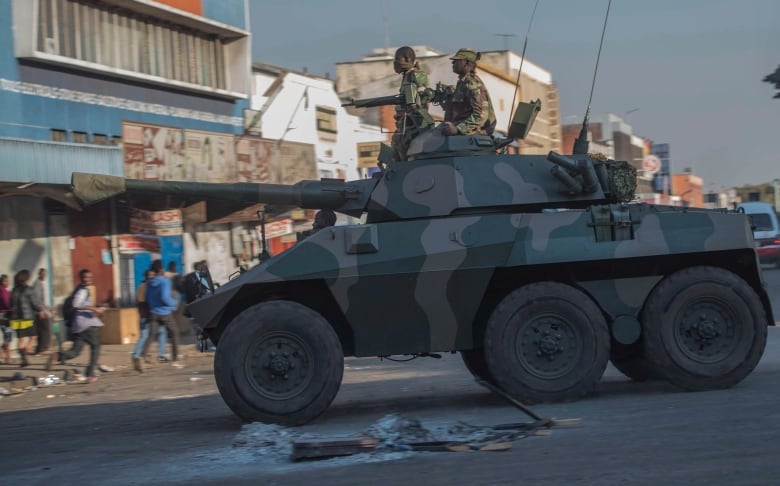 An army tank patrols on a street in Harare during a crackdown on protests by opposition party supporters Wednesday. Six people were killed. (Mujahid Safodien/Associated Press)

In a brief moment of drama shortly before the commission announced the winner in Friday's early hours, two agents for Chamisa's Movement for Democratic Change party took the stage and told waiting journalists that they "totally reject" the results and said they had not signed the election results as required, in protest.

Police escorted them from the room.

The week's events left many Zimbabweans with a sense of unease and questions about how different Mnangagwa is from his predecessor and former mentor, longtime leader Robert Mugabe, who stepped down in November under military pressure amid a ruling party feud after 37 years in power.

The 75-year-old Mnangagwa has tried to recast himself as a voice of change, declaring that the once-prosperous Zimbabwe is "open for business" and inviting the Western election observers who for years had been banned by Mugabe. 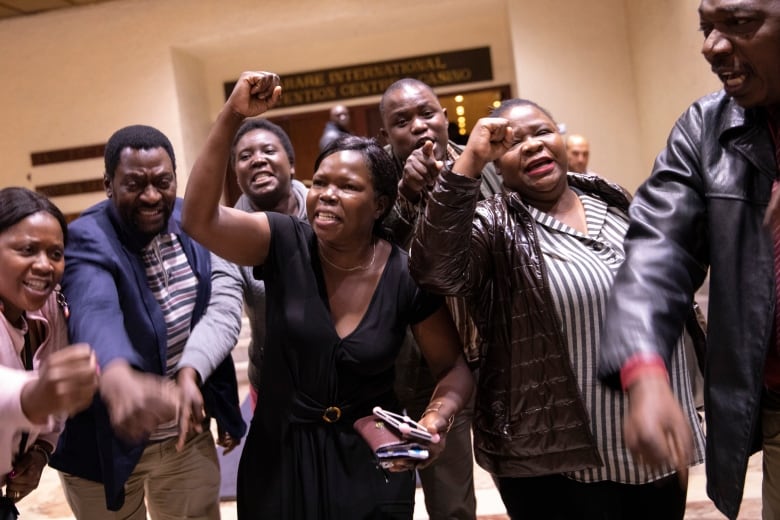 Supporters of Mnangagwa and the ruling Zimbabwe African National Union – Patriotic Front (ZANU-PF) celebrate his re-election at the Harare International Convention Centre in the early hours of Friday. The election was the first since Robert Mugabe was ousted in a military coup last year. (Dan Kitwood/Getty Images)

If this election is judged credible, it will be a big step toward the lifting of international sanctions on this southern African nation whose economy has long collapsed and whose reputation has suffered after years of repression of the opposition and allegedly rigged votes.

So far international observers have issued mixed reviews, calling Monday's election peaceful and a break from the past but expressing grave concern about the military's "excessive" use of force.

They criticized the delay in releasing the results of the presidential vote, saying it raised concerns about possible manipulation. 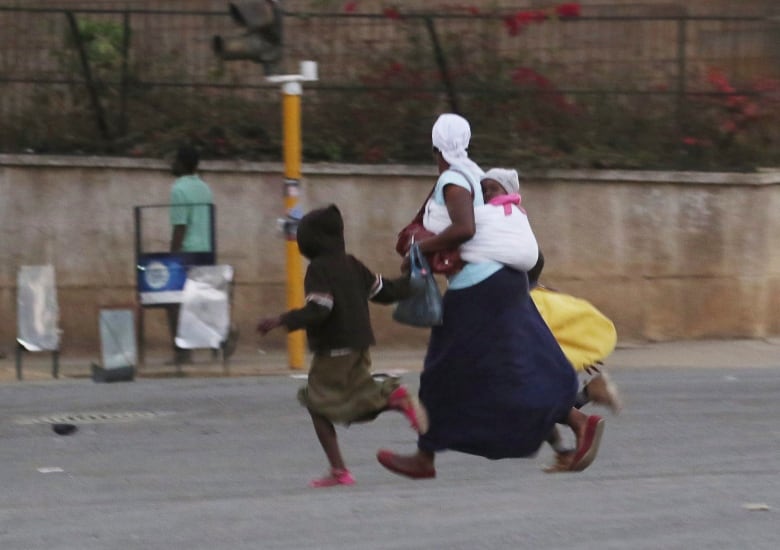 A woman with children runs down a street in Harare as opposition MDC party supporters clashed with police Wednesday. (Associated Press)

Anxious Zimbabweans waited to see what would happen next.

In Kuwadzana, a poor suburb outside the capital where groups of youths overnight sang and chanted MDC slogans before results were announced, it was silent.

No, I'm not happy, just because these elections were not free and fair.-Roy Mukwena, Zimbabwe citizen

One street vendor in the capital on Friday morning, Roy Mukwena, said Mnangagwa "won by force. No, I'm not happy, just because these elections were not free and fair."

Some, however, were content to move on and deal with the new leader. 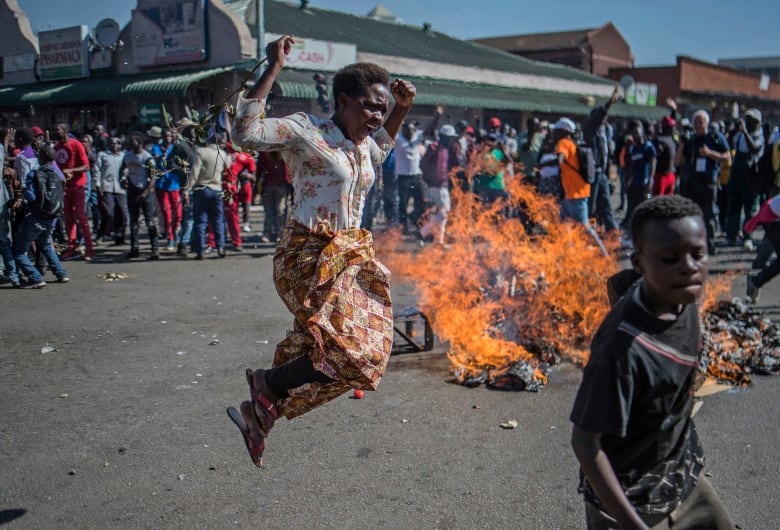 "Yeah, I think he's the right man. Because he has been there for quite some time and he knows where the weaknesses are," said a 29-year-old clerk who gave his name only as Eddy.

"He has the experience from … previous government. So he knows how to manouevre all the problems we have. I just hope he will do well."